In 2009 when President Obama first took office, America faced a serious healthcare problem that had been ignored for decades.  Significant changes needed to be made to address our nation’s problems, which included rising costs and inadequate care following a trajectory to insolvency.  At President Obama’s inauguration forty-five million citizens did not have access to insurance, using the emergency room as their primary care facility.  Medicare and Medicaid were facing default and driving federal deficits to record levels. The private healthcare industry accounted for 21 percent of total US GDP, contrasting with 11-13 percent for comparative nations.  In addition, the US healthcare budget faced $60 trillion in unfunded liabilities over the next 75 years, with no solution.  To compound the problem, private industry was leveraging tax-payer dollars for short term profits, disregarding long term accountability.

At first glance the challenge to obtain healthcare solvency appeared insurmountable.  Many demanded scaling back Medicaid, while others wanted to implement similar single-payer programs as found in Germany, Japan, Canada, or England.  Several blamed insurance and pharmaceutical industries for driving costs, and others cited frivolous lawsuits which drove doctors to provide unnecessary care.  Almost all voices aligned that cutting Medicare was not an option due to voter demographics, and any legislation to weaken private industry would be met with cries of socialism.  It was under these conditions that the Affordable Care Act (ACA) was debated and passed which brought together ideas from every political ideology.

The Affordable Care Act, also known as Obamacare, is one of the most significant pieces of legislation signed into law in the recent history of the United States. Although the law is complex and appears ambiguous, understanding the intent of this law is critical to evaluating its merits. Simply stated, the ACA can be broken into three areas of responsibility:

Business: Shifts healthcare responsibility away from the government to private industry.

Individual: Levels the playing field between private healthcare providers through the use of exchanges, thereby fostering competition for individual policies.

Government: Expands state Medicaid to cover families under 133 percent of the poverty line (Medicaid currently covers up to 100 percent).

Large corporations with elastic goods depend on low cost structures and therefore low wages. In many regards these businesses are as dependent as the lazy, using government to subsidize their benefits and pocketing the difference. Almost half of the uninsured (46%) work full time with 28% working part time.  Many of these full time workers are employed by companies like Wal-Mart, whose average associate receives $1,000 in annual government entitlements.  Subsidizing benefits with governmental entitlements has allowed corporations and shareholders to enjoy record profits.  They also place greater pressure on government liabilities and drive up costs to taxpayers. 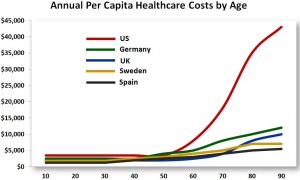 Obamacare (ACA) holds all businesses and corporations responsible for supplying healthcare.  If a business employs more than 50 full time workers, they are responsible for providing insurance or paying a penalty (the implementation of this mandate was recently postponed for a year).  If a company employs 25 people or less, tax credits are provided to subsidize coverage. Seventy percent of all healthcare costs happen in the final fifteen years of an individual’s life, typically while under the umbrella of Medicare.  Access to life-long preventative medicine is critical in lowering Medicare liabilities.  Shifting coverage to private industry also lowers the government’s emergency room expenses which the uninsured use in place of primary care physicians.

There has been significant reaction to the healthcare law’s corporate directive.  Mandating industry to provide insurance for their employees will increase costs for any entity not already doing so today.  This is a fair criticism, especially when it comes to small businesses that cross the fifty employee threshold.  However, looking at cumulative data and avoiding anecdotal arguments allows for a balanced discussion of the overall impact.  When it comes to small business, less than ten percent fall into that much-discussed mandated responsibility, as the other ninety percent currently meet Obamacare (ACA) requirements.  To assist both the ten percent and the 90 percent, Obamacare gives access to competitive exchanges (known as SHOP) which will drive down costs for employers currently offering healthcare.

When an individual is not covered by an employer or as a dependent, they are responsible for their own insurance.  Beginning in October 2013, the government will create a competitive vehicle where insurance companies meeting basic requirements can compete for business. Similar to websites Expedia or Lending Tree, once personal criteria is entered, insurers will publish rates and the consumer can choose a plan based on price or benefits.  Known as insurance exchanges, these will be launched nationally to help consumers make educated choices and provide a baseline for coverage comparison.  Exchanges will soften interstate requirements and prerequisites allowing for productive competition between insurance providers.

Similar to existing employer-provided healthcare, a person's individual policy will also allow access to preventative medicine. Even more important, individual healthcare will allow small firms (fewer than fifty employees) to compete with the benefits of larger firms when attracting employees as benefits are universally. 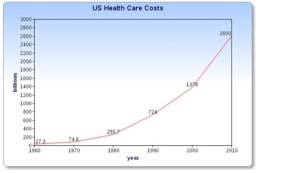 Since the bulk of uninsured individuals are under 35 years (65%), providing coverage for them is critical to lowering costs for all private insurance companies, given their healthy age demographic.  These younger, healthier participants are needed to offset high risk individuals, much like auto insurance or Medicare.  Because the inclusion of low risk individuals is critical in driving down costs, it is imperative they sign up.  One of the concerns is that uninsured individuals will forgo purchasing their insurance until they need it.  At this point, the only penalty they will face is an $89 annual tax, which is not very persuasive.  However, if the exchanges are able to drive down prices making health insurance affordable and attractive, this concern should be overcome (we will know in October).

On the government side, Obamacare (ACA) legislation mandated that State Medicaid programs cover individuals whose annual earnings fell within 133 percent of the Federal Poverty Level (FPL). The FPL currently covers at 100 percent, so the ACA provided funding to cover the increase; however, this mandate was struck down by the Supreme Court.  States can now opt out of expanding Medicaid, forgoing federal subsidies and leaving millions of their state residents uninsured.  Since those  in this demographic tend to be part of the healthier population, the aforementioned balance between the healthier individuals providing offset to sicker individuals will be more difficult to obtain, and insurance prices may not reach their full potential.

Living in Arizona and watching the fight over Governor Brewer’s decision to expand Medicaid, it’s hard to understand why any state would opt out.  The expansion will bring additional funding, jobs, and access to healthcare. States rejecting the Medicaid expansion will lose out on $8.4 billion in federal funding, exclude coverage for 3.6 million uninsured, and see $1 billion more in uncompensated spending.  Even more problematic, states rejecting expansion will see non-reimbursable emergency room and Medicare costs grow.

While I have argued that healthcare coverage is a three-pronged responsibility, many feel that a single payer healthcare system is the preferred model. This caused some to level the charge that President Obama did not fulfill one of his signature promises from the 2008 campaign: obtaining single payer healthcare.  Instead he took Governor Romney’s framework from Massachusetts, authored by the conservative Heritage Foundation, and leveraged the plan in a spirit of compromise. Initially this infuriated supporters as they felt betrayed on an issue they believed was mandated from the decisive election victory.  While President Obama may have expected this, what he probably didn’t expect was the venomous backlash from the right, even though the ACA is based on a healthcare plan they helped create, implemented by a popular centrist Governor.

Perhaps what opponents are politically afraid of is not the demise of the American healthcare system, but the potential success of Obamacare (ACA).  Currently three states have released preliminary pricing for their healthcare exchanges with better-than-anticipated results.  By October all states will see competitive pricing on the exchanges and citizens across the US will begin shopping for their preferred rates and cutting through political propaganda. For the governors of states that rejected the expansion of Medicaid, they will have to explain to 3.6 million employed voters why similar citizens in other states have healthcare and they do not.

While no legislation is perfect, the ACA improves access to healthcare, not only for the uninsured, but also sets guidelines to improve care and protect consumers through some of the following benefits:

Perhaps the biggest criticism is the expense of the Affordable Care Act (ACA). But according to the non-partisan CBO, Obamacare (ACA) is deficit neutral.  If Obamacare was to be repealed, there would be no change to our annual deficit or national debt.  Any additional costs associated with the law are offset primarily by scale and penalties paid by those unwilling to buy private insurance.  In fact the latest projections by the CBO resulted in $150 billion budgetary savings over 10 years versus the system currently in place. Opponents also charge that Obamacare is a tax for those who remain uninsured.  This is a fair statement; however the receipts collected will help offset emergency room liability for the uninsured that all taxpayers subsidize today.

To understand the new healthcare law, it is imperative to ask the right questions in order to open up honest debate.  Obamacare (ACA) is a far cry from socialism; its main purpose is to reduce Medicare and uninsured emergency room expenditures through access to care.  It uses tax penalties to push citizens away from government and into the hands of private insurance companies.  Obamacare (ACA) also delivers improved quality of life due to access to health care, unattainable for most Americans due to cost -- a significant benefit to society. Finally the most compelling argument for the ACA is our inability to call the United States the greatest country when our healthcare expenditures are the highest in the world and millions of our citizens lack basic insurance coverage.  The Affordable Care Act still needs revision, but it is a much needed improvement over the previous status quo.

Thanks to Elizabeth Eastmond for her edits.