The GOP Left Me

Several months ago, when a friend invited me to join the “Mormon Liberals” Facebook group, my wife asked me, "Are you going to join?"   I looked at her and said, “I’m not a liberal.”  She looked at me and said, “Yes, you are.”  And I was at a loss for words.  They say your wife knows you better than you know yourself, but I didn’t think this was actually the case until I realized -- she was absolutely correct.

In college, I used to be a Hannity-listening, O’Reilly-watching conservative.  My family are all conservatives, and I grew up in a very orthodox Mormon household.  But for most of the last decade, I’ve becomes more and more of what I would consider "moderate" or "independent", but what - it seems - everyone around me says is a Liberal.  (I live in Texas -- so there's that.)

This transition began, for me, in 2008 when Mitt ran for the first time.  I was really pleased to see a sharp, successful, northeastern, moderate governor have such a great shot for the GOP nomination.  I followed his candidacy from the beginning.  I even made the first political contribution I have ever made to his campaign at that time (which he spent sending me hundreds of follow-up pieces of mail asking for more money).  I then witnessed the ugly primary process, which has just gotten uglier since, where each candidate jockeyed for position as the most conservative candidate.  Each candidate had to prove their conservative values by making idiot proposals like building TWO fences on the border.  (Because the only thing more conservative than ONE fence is TWO fences!)  This bloody, right wing pulverization of Mitt's moderate values and compromise governorship sunk his chances of ever being a viable national candidate, and I saw that all happening way back in 2008.

Meanwhile, I observed the Left as they worked to broaden their message to gather up moderates and independents (like myself).  President Obama was a brilliant choice for nominee over Hillary in that he was such a new senator, his political image carried far less baggage and could be influenced -- and it worked brilliantly (see: Presidential Election, 2008.  Presidential Election, 2012.)

Since 2008, the blood bath on the right has continued.  Opinions I have long-held -- on funding government, on immigration reform, on helping the poor, on capital punishment -- are simply not welcome in the Republican party anymore.  One day, I had to simply wake up and realize that they no longer reflected my beliefs and they no longer wanted my presence - and that this is okay!  I had to tell myself - I can be a good, faithful, dedicated Mormon and a good "liberal."

It's now 2014, and the right-wing-swing shows no sign of stopping in the GOP.  This week's CPAC conference showed Rand Paul, Rick Perry, and Ted Cruz as front-runners for 2016 - all of whom make my skin crawl from both a personality and policy perspective.  The GOP is making no progress toward opening up their party to minorities or entreating women into small-government thinking.

I would encourage you to consider the GOP candidates, their platform, and their message.  You might be thinking, "this really doesn't represent my views at all."  If so, I welcome you to the moderate middle.  You are welcome here.  You may have gotten left behind by the party of "compassionate conservatism."  You may long for the days of compromise we had between a Newt Gingrich and Bill Clinton.  You may be thinking of the expansionism and opportunity (for everyone) of Dwight Eisenhower.  If you feel those days are gone for the GOP, as I do, welcome to the new "liberal" majority.

(Oh, and don't worry too much about the label, it fits better with time.) 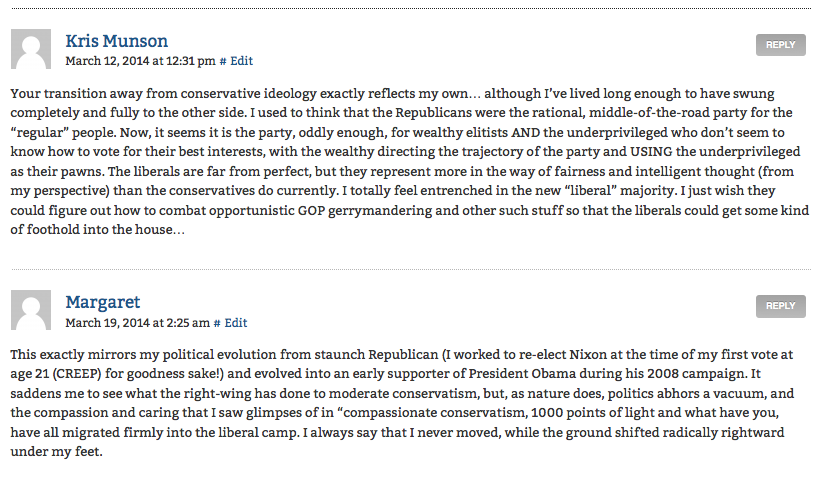