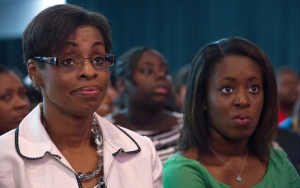 Mitt Romney and Joe Biden both took turns politicking in front of the NAACP's annual convention, and Romney's big booing was widely played on cable news networks and across the internet.  But what you haven't heard is that Vice President Joe Biden was also booed - for telling the crowd he would be closing his speech.  Yes, Biden received a much friendlier reception.  Just watch a few minutes of each speech, and listen to sounds of the crowd; when Romney is speaking you can almost count out the 5% of African Americans that will be voting for him in November.  Even the music greeting the two speakers is in complete contrast: Biden's intro sounds like the start of a party, while Romney's "God Bless America" intro sounds like it's being played by an organ at a funeral.

But putting all of that aside, I am must applaud Romney for attending the convention (while George W. turned down invitations repeatedly.)  However, he made a misstep or two, starting with one of his opening lines: "I believe that if you understood who I truly am in my heart, and if it were possible to fully communicate what I believe is in the real, enduring best interest of American African American families, you would vote for me for president."

Firstly, I listened to this line repeatedly: was his "American African American" line a verbal stumble or was Romney just trying to differentiate African Americans from Canadian African Americans?  Secondly, I find it a bit preposterous that Romney would claim to know (in his heart of all places) what is really best for the African American community.  He proved that he does have a handle on all the negative statistics that circle and stereotype African Americans when he said, "the unemployment rate, the duration of unemployment, average income, and median family wealth are all worse for the black community." But I am fairly certain that he doesn't have some magic trick to solve these issues - if previous Republican administrations didn't make significant inroads here, why should anyone expect that Romney would or can? 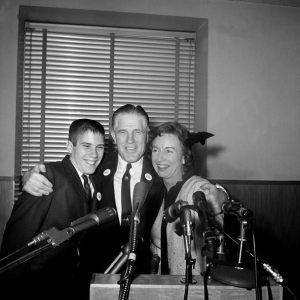 George Romney hugs son Mitt, 14, and wife, Lenore, at a Detroit news conference on Feb. 10, 1962, after announcing he would seek the Republican nomination to be Michigan's governor.[/caption]

That said, the story of Mitt Romney's father, Michigan Governor George Romney, is an interesting one.  He spoke out in favor of civil-rights and pushed for reforms to counter discrimination in housing. Due to this, he faced opposition from leaders in his own party and from angered whites in his state.  Mitt Romney, on the other hand, has stayed away from discussing race or even his father's civil-rights legacy.  According to Maeve Reston of the Los Angeles Times, "Romney has campaigned over the past year in front of predominately white audiences," and he is "a far more conflict-averse candidate than his father." And apparently, discussing his father's legacy could cause conflict with the conservative base.

But clearly the black vote is not what Romney is after, considering that even the African American Mormon vote seems out of reach; (see this article in the New York Times.)  Some theorize that Romney has even given up on winning the Latino vote, and that his outreach efforts to Latino Americans can be summed up by his bungled Spanish language campaign ads;  even his new ad featuring his Spanish-speaking-missionary son Craig (the curly-headed one, in case you're keeping track) is only being played in limited markets - with just $57,000 total air time bought, (and as of this writing, the dang video won't even play on Romney's website!)  Governor Romney is aware that his chances at winning over this group is limited, and as Eric R pointed out, his stance on Latino immigration is at odds with the official position of the LDS Church.  So that just leaves the white vote - and this is where Romney really has his greatest opportunity.

In 2008, 43% of white voters cast their ballot for Obama, while 55% voted for McCain.  We might expect similar numbers in 2012, although some (including Obama himself) express concern that the President may have lost his luster.  With continued unemployment issues, his "gray hair", and "Republican obstructionists" to Obama's brand of change, these white voters may be shedding their white guilt and their enthusiasm for President's message of hope; this is also evident among the young white vote, and this could result in many of these youths not turning out to the polls.  Additionally, white blue-collar men have decreased from 34% to 28% in their support for the president.

So with these trends among white voters continuing, can Romney expect a win in November?  Some have noted that although whites are still the dominant race in America, Latinos are now at 16%, followed by African Americans at 13% and Asian Americans at 5%.  By some estimates, the percentage of people of color in the USA will overtake whites by 2050 - (minority births have already overtaken white births in the US.)  And this is where Obama's reelection will ultimately be found.  The minority electorate has grown in the past four years, and voter suppression aside, Obama may not need those extra white votes.  So even if Obama experiences some loss of love among white voters, will that necessarily equal more votes for Romney?  Probably not.  It probably means more people staying home on election day on both sides of the political spectrum.

A year ago, The National Journal did a whole bunch of calculations that looked at Obama's 2012 reelection chances in light of race and the nation's changing demographics.  The article is long, cumbersome, and impossible to digest if you aren't being tested on it for your American Heritage final exam, but this here is a pretty good summary paragraph:

"So even if Obama’s support slips among whites, Republicans will face a tough uphill climb if they cannot capture more minority votes. Carlos Curbelo, a Miami-based GOP consultant, asserts that Republicans cannot win if they allow Obama to keep two-thirds of the Latino vote he attracted in 2008. The first step toward turning some of that support, he contends, is aggressively pursuing those voters with Spanish-language advertising. 'Some Republicans say, ‘We do not want to advertise in Spanish because it sends the wrong message,’' he says. 'We need to get to them, no matter what channel they are watching, or magazine they are reading.' And once Republicans have Hispanics’ attention, Curbelo insists, they must make the case that Obama abandoned his 2008 promise to emphasize comprehensive immigration reform. 'There is a gaping hole in the president’s campaign,' he argues."

At this point, President Obama is reaching out to these groups and plugging this "gaping hole", as we saw recently with his announcement that the US will no longer seek to deport undocumented immigrants who came to America as children.  So as we march onward to November, we may find that ultimately, the white vote might not be so great after all.
Contributors NAACP Obama racial issues Romney
Do you like this post?
Tweet