The liberating form of government intervention

Take the Word of Wisdom, for example. We are taught that living by the Word of Wisdom is a requirement. This requirement strictly limits us in certain areas: no alcohol, no drugs, no coffee or tea, no meat but for in times of famine, etc. But, we understand, those limitations actually increase our overall freedom. Even though our freedom is limited when it comes to alcohol (for example), our freedom is maximized in the sense that we are free from the negative effects of that alcohol. As one article in the Church's Ensign puts it:

[B]ecause the Word of Wisdom can liberate us from slavery to those proscribed items it is clearly a liberating form. For most of us, it forms the framework within which we can achieve and maintain healthy bodies and minds, which in turn can generate the physical, intellectual, emotional, and spiritual energy we need for rich, positive, creative lives.

This idea of liberating form runs throughout the restored gospel. Marden Clark, formerly an English Professor at BYU and the author of the Ensign article quoted above, has an entire essay on liberating form that I would highly recommend [PDF]. I owe him the credit for the phrase, and I hope to be using it in a way he would approve. We believe that some form--rules, restrictions, limitations, laws--can actually liberate us. Not all form is liberating, of course, but a central tenet of our faith is that form can be liberating.

This is a principle that seems to apply to more than just spiritual issues. Gravity, for example, limits our freedom. Human beings can't jump over a mountain or fly. But, without gravity we also couldn't walk, play soccer, or breathe. Gravity is a liberating form. The limitation of gravity provides us a net increase in freedom.

Same with laws against murder, which limit some freedoms (say, to shoot anyone we want), but grant us many others (like the freedom to not be killed). Such laws are another variety of liberating form--limitations on freedom that ultimately grant us even more freedom.

But, the best government intervention is a liberating form: it limits specific freedoms in order to maximize freedom for everyone. Taxes limit our freedom to directly spend that money ourselves, even though, in a representative democracy, we do have a say in how our tax money is spent. but in return we get national defense, an educated populace, higher quality of life in old age[1], checks on the excesses of our imperfect economic system. Not all hard/smart work is rewarded in a capitalist economy (for example). That might not be a bad thing, but it might also need to be remedied by smart government regulation, etc.

Now don't get me wrong: not all laws are liberating form. Many laws are just form pretending to liberate while, in fact, doing the opposite. Sometimes form that liberates is difficult to distinguish from form that imprisons. And that's why we need to have debates about laws, regulations, taxes, loopholes, and exceptions. We need to make sure that any limitation of freedom is circumspect, strategic, and liberating. 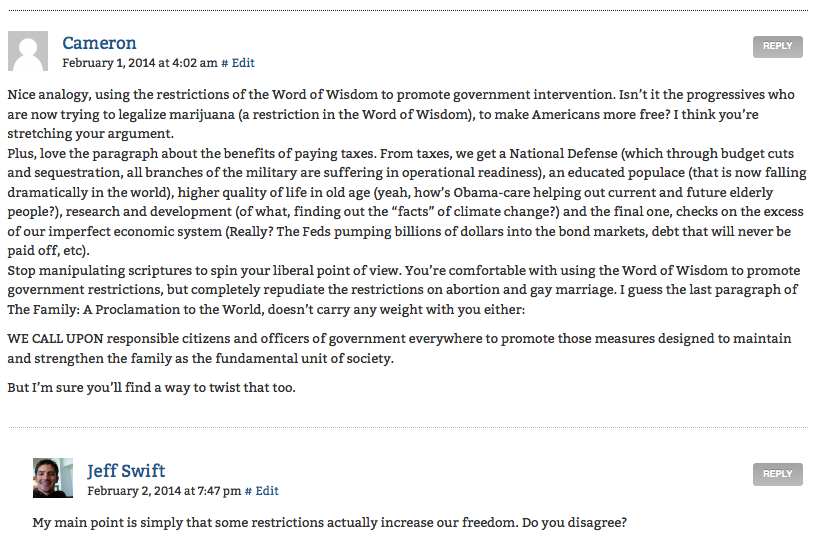