There have been a lot of conversations recently around abortion and I wanted to share something I read recently by Gabrielle Blair.  She does an incredible job articulating the Church's stance and why being pro-choice is actually more in line with what the Church teaches than being anti-abortion.  The original is found here.  I reached out an received permission to copy her words here.  Enjoy. 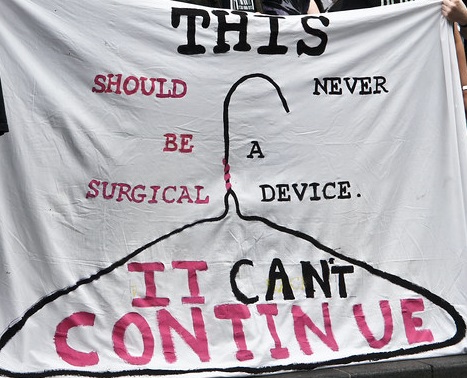 This may stress you out further, but we could also accurately say the Church is pro-choice — we want those who we think "qualify" for an abortion to be able to choose one if they want. That's pro-choice.

If the Church stance changes, and all abortions are forbidden no matter what — even for cases like: the pregnancy is killing the mother, the fetus has died in utero, or an 11 yr old child was raped and impregnated by her father — then that would be an anti-abortion stance.

Let's start with miscarriages. Have you had a miscarriage? Or multiple miscarriages? How many weeks along were you? Do you believe the fetus had a spirit? If yes, will that spirit get another chance for a body? Or was that the sum total of their Earthly experience?

I've asked these questions before and there is no consensus. Some people say they felt no spirit and don't believe the embryo had one — at the time of miscarriage it was only the size of a small bean and could be mistaken for a small bit of phlegm.

Others believe they did feel the spirit of the fetus, and that they felt the same spirit(!) when it came again in a future pregnancy.

In the case of full-term stillbirths, many Mormons believe that was the baby's chance at a body, and that the baby instantly qualifies for exaltation.

But we don't actually know any of this. We don't have doctrine on miscarriage, or when a spirit enters the fetus.

And as much as we like to talk about the after-life, we don't know how any of it is supposed to work. If a 1 yr old dies, is their spirit in Paradise an adult?

The comforting thing is: there aren't that many options for the fetus-spirit questions.

1) If we think the fetus DIDN'T have a spirit, then there's no eternal question to ponder. We are sad because we were hopeful the fetus would turn into a baby, but alas, it didn't happen.

Both excellent outcomes from an LDS perspective.

In the case of abortion, if we think the embryo/fetus DIDN'T have a spirit, then, again, there are no eternal questions to ponder.

If we think the embryo/fetus DID have a spirit, then we must conclude the spirit is so amazing they don't require experience in a body, or that the spirit will get another chance at a body.

To be clear, I know miscarriage and abortion aren't the same.

And yet: The physical and spiritual outcome for the fetus is identical. So if your biggest concern with abortion is: WHO IS LOOKING OUT FOR THE BABY?!! Then as a Mormon, you can put your mind at ease. You don't need to worry or think about the baby.

So then we have to ask, from a doctrinal perspective, why as #LDS #Mormons would we be bothered by abortions? Why would it be a divisive or important issue for us? The ultimate outcome for the spirit of the fetus is excellent.

The deeper we dive, the more it seems the true abortion issue for Mormons relates to not liking when women have non-procreation sex. This tracks for me anecdotally, because I hear from LDS folks daily who want to discuss abortion and say: She should have kept her legs closed!

They express the wrong and misguided belief that most/all abortions come from casual one-night stands, and don't seem aware that many abortions take place within married couples.

It's a weird mental conflict that Mormons have, because of course we want and need women to have sex. But clearly we're also not okay with women enjoying sex just for sex. It's especially odd because a common way women become mothers is via sex...and we are consistently told that motherhood is the highest, holiest calling. That mothers should be revered, and mother's instincts listened to and respected. And if we really believe that, we should celebrate women having sex, not try to look for ways to punish them.

Speaking of a mother's instincts, when a woman is impregnated, she immediately has to start making choices for the embryo that may one day become a baby. And as Mormons, we know she has access to promptings from the Holy Ghost that guide and confirm her mothering instincts.

So, if the mother's instincts are telling her it's the wrong time to have a baby; that the baby will not have the opportunities to learn what they need to learn on Earth, why wouldn't we listen to her?

Who on Earth would know what's best for that spirit more than the mother?

Some of us maybe be troubled by these ideas. Maybe when you picture abortion, you are picturing full-term babies being torn apart limb by limb. But that's not real.

If you're clinging to that image, you are choosing to believe something you know is a lie. Stop doing that.

Abortions, especially those induced by pill, are physically similar to miscarriages, and both generally happen at home. 91% of abortions occur before 13 weeks. 85% of miscarriages occur before 12 weeks. When you picture an abortion, it's accurate to picture it like a miscarriage.

1.4% of abortions occur after 21 wks. They are intentional, wanted pregnancies that tragically are not viable.

And the 7.6% of abortions between 13 and 21 weeks? The mothers report they wanted to have the abortion as early as possible, but they didn't have funds or access.

Still hung up on: "BUT THEY ARE MURDERING BABIES!"? You've got to stop that. Remember, miscarriages and abortions happen in the first trimester, which means you need to picture the developing cells as a raspberry-size clump. The developing tissue is not a baby yet.

(Can't tell the difference between a fetus and a baby? Speak with any woman who has had a common first trimester miscarriage, and has also had her baby or toddler die. The difference between the two events is incomparable. The miscarriage of a fetus is a loss of hope — hope of what might have been.  The death of a child is the ground shifting beneath your feet in a world-changing and disastrous way that many people never recover from.)

But okay, even if you insist the raspberry size fetus is a baby, the question must be asked: Does God love or value the raspberry-baby more than the pregnant girl or woman?

Personally, I believe God values the living person more than the might-become-a-person.

But even if you don't agree with me, then what? Based on doctrine, the most you can say is that God loves them equally, and wants what's best for both of them.

And if God loves them equally, then here's the best case scenario: The pregnant girl or woman is allowed to follow her instincts and spiritual promptings as she navigates her time on Earth, and the raspberry-fetus-baby gets to be with God. That's what we call a win-win.

(And the alternative is so very, very discouraging and destructive. The well-documented outcomes for children of unwanted pregnancies are so often disastrous for both the child and the adult. Both suffer. Neither thrive.)

My fellow #LDS #Mormons, I BEG you to stop pretending our Church stance on abortion, or our doctrine, align with politically conservative or evangelical views on abortion. There is zero alignment there. If you're convinced there is, you've been lied to. Be smarter than that.

Our Church stance is pro-legal abortion. Our collective teachings tell us fetus-spirits have good futures — whether they were miscarried or aborted. And we also teach that women are in the best position to make decisions for their potential offspring.

If you don't want an abortion, you don't have to have one. It's your choice. If a mother decides she needs an abortion, let's trust her instincts and promptings and support her choice.

Nothing good has ever come from trying to force personal religious beliefs on others.