Tax and Spend Liberals. If I had a nickel for every time I heard this phrase, I would be writing this post from an exotic hut with glass bottom floors somewhere in the French Polynesia. This negative connotation has been associated with the Democratic Party for several decades, and will be an effective talking point for elections to come. The irony: I would much rather be a tax and spend liberal, then a free charging conservative.

Recently I had a conversation with a friend whose number one disagreement with the current Democratic candidate was his commitment to let the Bush Tax Cuts expire (one might ask, why were the Bush tax cuts passed with an expiration date?). This, in essence, would be raising taxes.I followed up with a question regarding the consequences of deficit spending; their response, “government needs to be cut.”

There is not one current presidential candidate who shares this conservative ideology. Although Obama’s proposals are beyond McCain’s in cost, McCain’s proposals will increase deficit spending much faster that of Obama ($5.7 trillion to the national debt over the next decade -- source: CBO). Why?McCain is proposing vast tax cuts including voiding the AMT, doubling child credits, and lowering the corporate bill. This would be like cutting my salary by 20%, and not changing my spending habits. Needless to say I would rack up vast amounts of debt forcing me to leverage every asset I could to support my current lifestyle.

Think of the national debt as one giant Black American Express. Where does this limitless credit card come from? This is the scariest question of them all.We are currently expanding our money supply by borrowing from foreign countries. We are allowing Saudi Arabia, Japan, and China to become our shareholders. So, during this Olympic season when you are complaining about China’s human rights violations, just remember they are making our mortgage payments.

Looking at the last four presidents, government spending increased 36% under Reagan, 17.2 % under Bush I (only 4 years – 34% for 8 years), 21.2% under Clinton, and 32.4% under Bush II. What is most interesting from this comparison is that the economy was expanding at the fastest rate under the Clinton administration, providing them with the strongest justification to increase spending (higher tax revenues). Yet it was the tax and spend liberal who balanced the budget and kept the National Debt basically stagnant his final year in office.

Two major consequences of a rapidly expanding money supply (national debt) are declining currency value and inflation. When your two dollar milk now cost three, or the gas prices skyrocket at the pump, thank deficit spending and a weakening dollar. This is exactly why economists call inflation “the hidden tax”. However, we should take comfort that the current administration has passed sizeable tax cuts to off-set these cost to households making more then 250,000 a year. 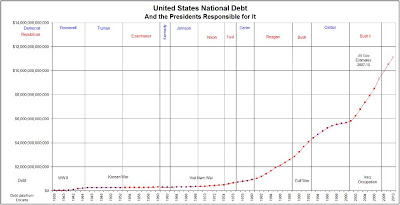