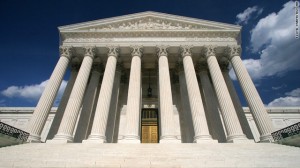 To be clear, the Supreme Court has not declared a Constitutional right to gay marriage. The High Court found DOMA to be unconstitutional because it was enacted to deny federal benefits to a defined group.  The motivation for the designation was congressional animus in the attempt to limit benefits to traditional "Judeo-Christian" marriages of one woman and one man. Justice Kennedy, writing for the majority in the DOMA decision, does not declare gay men and women a protected class under a traditional civil rights analysis. In addition Justice Roberts writing for the majority in the Prop 8 case punted on procedural grounds to allow same-sex marriages to go forward in California. With the decisions, there is strong indication that a current majority of the court is prepared to declare same-sex marriage a constitutional right, but that has not happened yet.

There are two important constitutional principles at play - civil rights and religious freedoms. In noting some religious motivation for DOMA, in preserving traditional "Judeo-Christian" marriage, Justice Kennedy does not deal with the First Amendment concerns of those who believe in marriage as a religious union between one woman and one man. Kennedy defines the issue with regard to their personal freedoms under the Fifth Amendment with reference to the Fourteenth. He also knocks out the strongest leg of the argument against same-sex marriage by determining that gay marriage does not cause harm to the children raised in such unions, but rather a legal prohibition "stigmatizes" and "humiliates" the children.  Justice Alito in dissent agrees that the sociological studies are incomplete and argues that society should be given more time to work out this issue.  The Justice’s reach for more time is a good argument, but not enough to persuade the majority.

Even if the court in subsequent cases establishes gays as a "protected class" under the privileges and immunities clause of Article IV, along with the "equal protection under the law" of the Fourteenth Amendment, religious beliefs and practices protected under the First Amendment are not necessarily compromised. Current and probable future law allows religious bodies to freely determine by their own criteria and behavior of whom they will and will not marry. The Catholic Church and many other religious congregations have their own rules about who a priest or minister can marry. Various Jewish synagogues from orthodox, conservative, and liberal groups can also set their own rules. The LDS Church currently has significant criteria to determine the qualifications of its own members to obtain a Temple marriage. There is no basis to compel these religious organizations to allow for same-sex marriage under their own constitutionally protected, traditional religious practices.

The recent rulings on gay marriage will impact society with regard to businesses and private individuals in workplace, housing, and other civil matters driven by the changes to federally recognized marriage. Regardless of the church’s position of male-female marriage, the LDS Church has supported legislation for protections of gays in the workplace and in housing.

Justice Scalia, in his highly entertaining dissent, argues against the idea that the decision could only bind Congress without interfering with states with the authority to define marriage. In a footnote he specifically cites historical Utah polygamy:

"Such a suggestion would be impossible, given the Federal Government’s long history of making pronouncements regarding marriage—for example, conditioning Utah’s entry into the Union upon its prohibition of polygamy. See Act of July 16, 1894, ch. 138, §3, 28 Stat. 108 (“The constitution [of Utah]” must provide “perfect toleration of religious sentiment,” “Provided, That polygamous or plural marriages are forever prohibited”)."

There are still splinter groups that claim allegiance to older practices of Mormonism although disavowed by the church. Utah newspapers have reported that some of these groups look favorably on the Supreme Court decisions as an opportunity to have their issues reconsidered.

Any suggestion must look at the balance between state interest and religious practice under First Amendment standards. In the 1878 case, Reynolds v. United States, the Court took a very simple approach in declaring federal laws against polygamy to be constitutional. This was based on a clear distinction between belief and practice and the impact to individuals and society at large. More recently, the Court has applied stricter scrutiny to laws infringing on religious practice and recognized First Amendment protections for those practices that do not interfere with an important governmental interest. Anti-polygamy laws would likely survive any challenges given the impact to children and women which are dominated in a patriarchal polygamist household. In addition, same sex marriage is driven by a collective acceptance of the practice in society which is not the case with polygamy. Unlike same-sex marriage, no state has legalized polygamy and we don't foresee that happening.