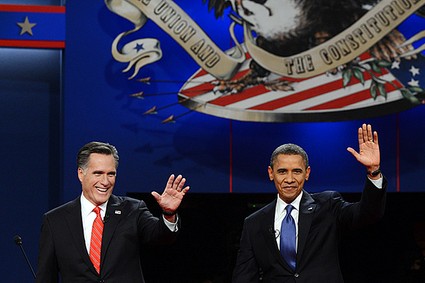 Let's just admit it now and get it out of the way: Romney looked strong in tonight's debate, and President Obama seemed  as if he didn't want to offend anyone.  Well, the Presidential race may have gotten a little more interesting - especially because the undecided voters (those who tend to have no idea what is going on in politics) may have been watching this evening.  And if they tuned in to this debate without the back story... then maybe Romney came out ahead?

The next two debates will both cover foreign policy, and the final debate is focusing exclusively on this topic.  And it is here that Romney may have found an opening: there is strong indication that the American officials at the Libyan consulate made several requests for extra security before the attack on September 11th that killed the US Ambassador Chris Stevens and three other Americans there.  Additionally, the State Department is reversing its former statements that the attack on the consulate was a result of popular protests due to American-made anti-Muslim video, "The Innocence of Muslims;" the State Dept now confirms that this was actually a coordinated terrorist attack.

Romney is rumored to be planning a coordinated attack of his own on President Obama's foreign policy record in order to assert that Obama is weak on terrorists.  This would be a much-needed boon after his "shoot-first-and-aim-later" statement on the evening of the attack in Benghazi and then his 47% comment that caused some Mormons to cringe.  Romney will need to continue to boost his image after the debate this evening, and maybe this is it.

Yes, Romney needs to seize upon this Muslim Moment.

But I wonder what is really going on here.  Maybe this is an area that Romney should avoid altogether.  Seriously folks, this is the President that killed Osama bin Laden. I mean, is it possible that the only voters who might respond to the idea that President Obama is weak on Islamic terrorism are those who believe that Obama is himself a Muslim?

Of course, Obama supporters do not require convincing that the President is the man for the job; it's just like tonight's debate - if one already supports Obama, then Mitt Romney's red-bull-infused attack did nothing more than cause a slightly irritating rash on the proverbial backside of listener's intellect.  (And poor poor Big Bird.  As one tweet asked: "doesn't Big Bird live on the street?; Romney hates the homeless.")

Anyway, I am amazed by how many questions still abound about Obama's religiosity and faith, and many come from our fellow Mormon brothers and sisters.  Interestingly enough, some of these same Mormons also question the faith and commitment of us here at Mormons for Obama, as evidenced by the constant trickle of hate mail we receive. (One would assume that since we Mormons are often challenged regarding our Christianity, we would be careful not to level the same charges at someone else.)  Alas, this is not so.

We recently received a comment that expressed a considerable amount of disdain for President Obama and our support for him. The commenter disparaged Obama as a "lover of Islam," and went on to say that she would not allow him to watch over her dog, "less (sic) alone my grandchildren." (To which I ask, did Obama even ask to babysit her grandchildren?) But she does have a point about Obama watching her dog, although I would add that both Romney and Obama carry baggage in this department; Romney's baggage is on the roof of his car, while Obama's is on his plate.

In the end I deleted the comment, seeing that it did not follow our guidelines of civil discourse. Obviously, this begs the question as to why I would review its content here - giving it more prominence than what it possibly deserves.

Well, first I wish to correct the assertion that Obama is a Muslim. Clearly, this woman, like many others, believes every anti-Obama email forward she receives in her inbox (which, I will add, is producing another convert to Mormons for Obama. Read this hilarious piece by Mark Saal.) She also must have arrived late to the town hall where John McCain rebuked a woman (and a member of the Blood gang?) for saying something similar.  If Obama says he is Christian, why would it behoove us Latter-day Saints to question this?

But this leads to an even a more important aspect of this whole debate: it does not matter whether our President is Muslim, Buddhist, Christian, or even a Mormon.  In fact, I would vote for Obama even if he was Muslim, and I am pleased that Minnesota elected our first Muslim congressman, Keith Ellison.  We are a country of many cultures, ethnic groups, and religious affiliations.  If I feel I cannot trust a Muslim to properly represent my views and interests on a national or local level, then why should we expect an American Muslim, Buddhist, or Jew to accept a Christian president?

Many people became very upset when a mosque was proposed at a site near Ground Zero.  This hostility seemed to imply that all Muslims are somehow responsible for the events of 9/11. However, this public battle failed to acknowledge or demostrate the proper respect for the lives of the many innocent American Muslims who were lost in the World Trade Center attacks.  Of course, my argument is not new.

Regardless, many people continue to assert that Islam is a violent faith; however, I caution that we don't need to look too far to find violence in Christianity - and I am not just speaking of the Holy Wars: bombings of abortion clinics, Jones, Koresh, Northern Ireland, and Mountain Meadows, all happened under the banner of heaven.

I don't know everything about Islam, but I am unconvinced that Muslim Americans are somehow less American than Christians, or that consequently, a Muslim is somehow less qualified to be President of the United States.  The Christian Right often states that America was founded on Christian principles, but one only need to watch the season finale of Sorkin's The Newsroom to know that this is not exactly true.  Maggie spent all evening to find the supporting quotations from our founding fathers - but it took me 30 seconds: Top 5 Myths About America.  (Will MacAvoy, hire me please?  --and where were you tonight?  The tired Jim Leher could've used your crib notes.)  See this article on Wikipedia as well, because Wikipedia is always correct.

But I will quote one of our founding fathers here:

Believing with you that religion is a matter which lies solely between man and his god, that he owes account to none other for his faith or his worship, that the legitimate powers of government reach actions only, and not opinions, I contemplate with sovereign reverence that act of the whole American people who declared that their "legislature" should "make no law respecting an establishment of religion, or prohibiting the free exercise thereof," thus building a wall of separation between church and State. Adhering to this expression of the supreme will of the nation in behalf of the rights of conscience, I shall see with sincere satisfaction the progress of those sentiments which tend to restore to man all his natural rights, convinced he has no natural right in opposition to his social duties.

And by the way Fox Newsies, the Pledge of Allegiance had its famous line, "one nation under God," added to it in 1954 by our other founding father, President Eisenhower. See this article. 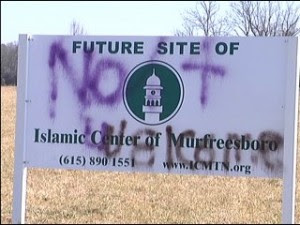 In the end, I believe that Obama is adept at handling our troubles in the Middle East.  Romney might possibly attempt to seize upon this anti-Muslim Moment and use it (as Bush the W. did before him) to stoke fear in the more bigoted hearts of America.  But as this article explains, it is high time we separated church and hate.  Obama has demonstrated how to do this; far from being the great apologizer as Romney accuses him of being, President Obama has exhibited true Christianity time and time again.  As Eric R. pointed out in his post:

(B)eyond the common sense reasons to be culturally sensitive to the Muslim faith..., there is another reason, an even better reason, for being thoughtful.  That reason, of course, is because it is the right thing to do.  Rather than subscribing to Krauthamer’s ‘only do good unto others when they have done good unto you’ worldview, I am more inclined to go with another philosophy, something more like ‘do unto others as you would have them do unto you.’

So Romney can debate on and on and on; some may listen and believe.  However, a quick tongue and a smart retort in tonight's contest doesn't obscure the fact that President Obama understands this country (beyond its capitalistic leanings) and its extremely important place in the world at large.  And yes - even the Muslim world.  Once again, I affirm my support for the President in 2012.
Christians Contributors mormons Muslims Obama Romney
Do you like this post?
Tweet