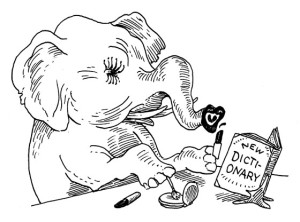 Lately I have been engaged in several debates and discussions with my conservative friends. I am often entertained with how they use words or phrases to exemplify a position or undercut my arguments. Since I find many of these tactics somewhat humorous, I decided to share some of the user's perceived definitions and place them against the litmus test of reality. Enjoy!

Birthers: Those who oppose any presidential nominee born outside of the United States as per the Constitution. Reality: This view really only applies to Democrat nominees. Currently one of the GOP presidential front-runners is Tea Party favorite Ted Cruz who was born in Canada. John McCain was born in Panama and George Romney was born in Mexico.

Communist: (also see Socialist) Conservatives are not really sure of the difference between a Socialist and Communist. Reality: Communism is COMPLETE governmental control of capital and resources. Nobody supports this, not liberals, not even Hitler.

Constitution: Our nation's founding document that can only be correctly interpreted by conservatives. Reality: The Constitution is cherry picked by conservatives to fit their agenda. Appointing judges, nominating cabinet positions, controlling the executive branch, and conducting foreign policy fall squarely under the President’s command but is undermined by conservatives on a regular basis.  Advice and Consent by the Senate is being abused and the House of Representatives does not represent the majority of the people due to gerrymandering.

Gun Control: The belief that government is coming for your guns and undermining your rights. Reality: Gun control is common sense solutions to help curb the rampant violence being experienced in our country. Ideas such as the Brady Bill, background checks, concealed carry permits, resources for the ATF to enforce current laws, and gun dealer inventory requirements are all solutions that can help prevent a portion of our 30,000 gun related deaths each year.

Entitlements: The giving out of free handouts to the lazy and parasitic by the government. Reality: 60% of all entitlements go to seniors, 20% go to the disabled, 10% go to working families, and another 10% go to non-working individuals and families (including college students).  It should also be noted that red states take more entitlements per capita than blue states.

Family Values: The basis for America’s greatness and the aspiration of how we should live as a society. Reality: Conservatives use family values as an ambiguous argument trying to suppress any diversity in social norms.

Food Stamps: Free handouts to the lazy. Reality: 50% of all food stamps go to children, and another 15% to seniors. 1 in 5 veterans are also recipients of food stamps.

Liberal Media: Any media outside of conservative news sources. Reality: This term is used when conservatives lack a coherent response to any data being sourced.  This could be viewed as the ultimate debate cop-out which, by disregarding the source, immediately invalidates all arguments.

National Debt: The amount of money we have to borrow due to the President’s budget. Reality: The Debt is a function of multiple administrations impacting mandatory expenditures that cannot be changed unless reversed by the House, Senate, and President working together.

Pro-Choice: A liberal position that encourage woman to seek abortions for their poor choices. Reality: Pro-Choice does not mean pro-abortion. Abortion is a complicated choice and the decision cannot be lumped into one generic stereotype. Pro-Choice should be left up to the individual’s doctor, religious authority, family and not directed by government influence. It should also be noted that 30% of all abortions are by married women and the abortion rate has been declining rapidly since 1980.

Pro-Life: A position that believes the embryo is a living person, and the sanctity must be protected at all costs. Reality: Pro-life arguments typically end at conception.

Ronald Reagan: The ultimate conservative and the gold standard for Republicans. Reality: Ronald Reagan supported gun legislation, signed pro-choice legislation, passed two of the largest tax hikes in American history, tripled the National Debt, passed full access for the uninsured to use emergency rooms, provided amnesty for three million undocumented workers, and signed several pieces of social reform legislation into law.  I’m pretty sure he would be kicked out of the Republican party today.

RINO: Republican In Name Only Reality: Name given to any Republican that does not maintain total loyalty to party ideas and platforms. I have seen Republican legislators who vote with the party 95% of the time and still be labeled a RINO.

Science: A selective explanation of data and theory that can be opposed for political justification. Reality: Public opinion does not trump scientific data.

Socialist: (also see Communist) Any person who supports government programs, fair taxation policies, or pretty much anything that is associated with the Democratic Party. Reality: Socialism is governmental control of capital and resources. The police, fire department, public schools, libraries, national parks, roads and bridges, judicial system, and the military are all socialist organizations.  Our country has always been a mixed-market economic system balancing socialism and capitalism.

Tea Party: A political movement that is holding our leaders responsible both fiscally and conservatively. Reality: A political movement that brings little to no ideas to the table and uses opposition as its only weapon.  The Tea Party takes extreme stances on every conservative issue and has been detrimental to the party when it comes to elections (Republicans would have control of the Senate today if it wasn't for Tea Party candidates).  The Tea Party creates gridlock and then points to the same gridlock as to why government doesn't work.

Tyrannical Government: Our nation’s leadership making obsessive power grabs to suppress the ideas of the majority. Reality: A conservative narcissist phrase used as fear-mongering to generate divide among our citizens.  Simply refuted, ask any believer why a tyrannical government would willingly submit to public elections.