Understanding the US Budget 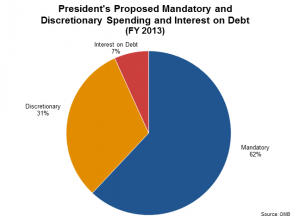 Our Budget is Represented by the Following:[/caption]

The United States budget can be broken into two groups, DISCRETIONARY spending and MANDATORY spending.  About 7% of the budget is interest paid on our debt – which will only increase, but should also be considered mandatory as defaulting is not an option.

As you can probably guess mandatory spending is outside of the President’s control and is regulated by established laws in place.  Mandatory spending includes Social Security, Medicare, Welfare, Food Stamps, etc.  The last major bump in Mandatory spending came in 2003 under Medicare Part D which approved an additional $17 trillion in additional spending across the upcoming 50-60 years. The only change that has been made to mandatory spending under President Obama, is Obamacare.  However, the CBO calculated the program is deficit neutral due to mandate penalties offsetting increased spending. So when you hear that Obama is responsible for the record recipients on welfare and food stamps, it’s a completely bogus claim as this spending is mandated by laws already in place. 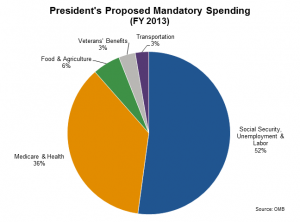 Here is the breakdown of mandatory spending:[/caption]

Discretionary spending makes up 31% of our total federal spend but represents the majority of our budget conversations (you can sense my frustration).  The discretionary budget is subject to annual appropriations in which the Congress and President have to agree each year.  Have you heard the saying that Congress controls the purse?  They do – but only for bills that have not yet been signed into law.  If a new budget is not passed, continuing resolutions can be approved by congress allowing discretionary spending to continue at historical levels (which is happening currently).  The largest part of discretionary spending is military which makes up 57% of the entire discretionary budget. If you take away military the remaining discretionary spend includes education, international support, governmental employees, transportation (PBS, Planned Parenthood, Big Bird, etc, etc) and make up 13% of our total Federal budget.  This meager 13% is what our President truly controls and can pull annual levers to grow or shrink. 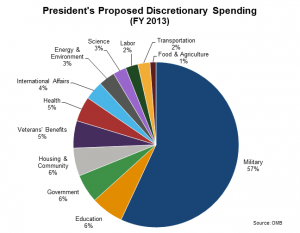 Here is a breakdown of discretionary spending:[/caption]

Now (here’s where I get on my soap box), when people call President Obama a big spender or big government, I immediately assume they have no idea what drives our budget or do not understand the budgetary process.  Besides the one year spike of stimulus spend (2009 – the vast majority being used to shore up state budgets), President Obama has been remarkable in keeping discretionary spending in check.  Discretionary spending has only grown 10% (it's actually declining if you take into account the sequester cuts) in four years but compared to any president since Eisenhower – this is strong.  Just to give a point of reference, a 10% increase in discretionary spending only attributes to 4% of total federal spending growth. If we want to hold President Obama responsible for 4% spending growth these past four years, this is a reasonable accusation.

Two of the worst presidents controlling total discretionary spending in the past 30 years?  Presidents Ronald Reagan and George W. Bush. 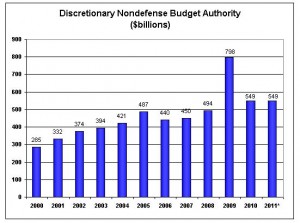 Now one can make the point that President Obama should be held responsible for not working with Congress to tackle mandatory spending (70% of our total budget) and that’s a fair statement.  However, with such backlash around Obamacare – which used marketplace principles to drive down costs modeled after conservative think-tank ideas of the 90’s – there is no way Republicans were going to let anything pass that would be a political win. To overcome any type of political posturing Democrats would need 60 votes from the Senate to beat any filibuster making any legislative fix to mandatory spending near impossible.

If the fiscal cliff is not solved, and tax revenues increase, we do not need laws in place that regulate the added income.  Any law governing spending would be placed into the mandatory bucket and would be difficult to modify.  Increased revenue will be applied to the total budgetary deficit as any incremental discretionary spending will need to be agreed upon by Congress and the President (which it wont).  Given President Obama’s track record with discretionary spending, I am confident the money will be used to close the budgetary gap.  Now one can argue that legislation could be signed to cap spending and I think that’s a fair conversation.  But once again, the problem is our budget issues are being driven by mandatory spending.

One more thought – history does not necessarily mean more tax revenue equals more spending.  Under President Clinton, tax revenues jumped and spending was kept relatively in check which is why he left office with a budget surplus.  Plus, as I have pointed out our budget problems have more to do with military and mandatory spending and less about the growth of non-defense discretionary spending which the President and Congress control.

Now I know some of these claims fly in the face of widespread perception of President Obama’s fabricated runaway spending habits (and Democrats for that matter).  The beauty of everything claimed in this post is that it can be fact-checked and I encourage all to do so.  Too much miss-information is driven by media outlets which makes budget conversations more about regurgitated talking points than actual numbers.