What is Driving Unemployment?

With the presidential election heating up there is one soundbite we hear from both sides on a regular basis – unemployment.  Although each side will lay out persuasive stories to drive awareness to their positions, unemployment is an elusive number driven by multiple levers.  Using only one measure to judge economic health is not only irresponsible, but laughable.  The GDP continues to grow, the stock market has returned to pre-bubble levels, and corporations are enjoying record profits.  Like all business cycles, unemployment is a lagging indicator and is the last measure to reflect economic change.

The American public gives presidents too much credit regarding the economy.  Presidents are powerful legislators but they do not control economic cycles given our market-based system. Understanding changes in the job market has more to do with Federal Reserve policies than presidential agendas.   Regardless of what you might think of George W. Bush, his policies had little to do with the banking collapse.  Unemployment stayed low during the early Bush years primarily due to the low cost of borrowing money.  Credit cards were cheap.  Mortgages were cheap.  Refinances were cheap.  Americans were leveraging personal debt to drive the economy through revolving credit and real estate borrowing.  Money was pulled from the housing boom and spent on consumer goods and services. 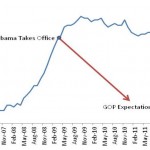 When the economy finally erupted at the end of the Bush administration and the free flow of capital was capped, the market swung the other direction and debt became a crippling liability.  Corporations started cutting costs and consumer good consumption did not meet their growth targets.  The stock market began its decline which further eroded any free capital that could be used to keep the economic engine turning.  The marketplace friction finally took a toll on employment.  The final year of the Bush Administration saw unemployment double due to increased efficiencies and budgetary choices.  Corporate hiring freezes led private sector job declines and proactive attrition was used to shrink the workforce.  With the sudden loss of investment tax, property tax, and sales tax our state and federal government saw almost $1 trillion in lost revenue.  Government was considering cuts in public sector jobs to avoid insolvency.

In 2008, in the middle of the presidential campaign, TARP was passed and signed into law by President Bush (recent polls show only 34% of Americans correctly identify President Bush as the signer) to help banks with capital and drive private investment.  In 2009, one month after taking the oath, President Obama signed the American Recovery Act which did several things: 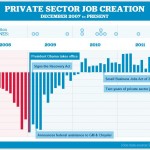 Between TARP and the Recovery Act capital was freed up to drive private sector growth, consumer spending, and sustain public sector employment.  Best estimates by reputable economists believe the Obama Recovery Act created or saved over two million jobs mostly public sector, with TARP and Federal Reserve policies driving significant private sector growth (I know fellow President Obama supporters use the following chart, but the data is not supported by legislation signed by the President).

As the campaigns continue to move forward take a second and really evaluate what the candidates are saying.  Unemployment is an important economic indicator, but voting for either candidate solely on this issue will lead to frustration due to lack of control.