Why I Support President Obama (Part I) 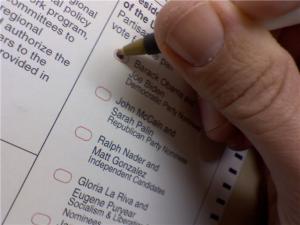 My principal reason for backing President Obama is his support and initiation of healthcare reform, and ultimately his signing of the Patient Protection and Affordable Care Act into law in 2010. Republicans have pejoratively labeled it Obamacare; meanwhile President Obama has embraced the term, saying, "I have no problem with people saying Obama cares. I do care." I care too, and this issue is the political lynchpin for me. I cannot support any candidate who does not appreciate or understand the need for an expansion of access to healthcare in this country. Healthcare should not be a privilege of the wealthy, but a right for all. I believe that if we can get behind public monies for libraries, sports arenas, museums, parks, wildlife protection, and Bombs over Baghdad, then we should also ensure healthcare access.

And so you might further see my point: are you aware that through local tax payer money, you (and your children) can check out Saw I, II, III, IV, V, VI, and Saw: the Final Chapter from the Seattle Public Library and the King County Library System? And I just checked - you can get it at the Salt Lake City Library as well.

My belief is that providing healthcare is the right thing to do; it is the Christian thing to do, and this aligns with my Mormon faith. I echo the words written by Boyd Peterson in his essay entitled, Why I'm a Mormon Democrat:

"I believe that the Democratic party takes the strongest position on many moral issues. For example, King Benjamin's address in the Book of Mormon admonishes us to prioritize, 'feeding the hungry, clothing the naked, visiting the sick and administering to their relief, both spiritually and temporally, according to their wants' (Mosiah 4:26). I believe the Democratic party works harder to protect and defend these moral priorities."

And so I feel about President Obama. When I decided to vote for Barack Obama, I did so with the belief that he would bring change to America and especially its healthcare system. Of course, there is more to be done. However, President Obama has fulfilled his promise of change in so many ways; therefore, I will continue to support him and his presidency.

In addressing the specific issue of healthcare, I like these two quotations, one from the US Conference of Catholic Bishops and the second from the American Medical Student Association:

"Our approach to health care is shaped by a simple but fundamental principle: 'Every person has a right to adequate health care. This right flows from the sanctity of human life and the dignity that belongs to all human persons, who are made in the image of God.' Health care is more than a commodity; it is a basic human right, an essential safeguard of human life and dignity. We believe our people's health care should not depend on where they work, how much their parents earn, or where they live. Our constant teaching that each human life must be protected and human dignity promoted leads us to insist that all people have a right to health care."

"In a time when thousands of people lose their health insurance every day, when health care is becoming elusive to even well-to-do Americans, and when any person is just one pink slip away from becoming uninsured, it becomes clear that health care for all is not just important to achieve, but imperative.

Americans purport to believe in equal opportunity. Yet, in the current situation, those who do not have health care are at risk for financial ruin and poorer health, both of which disadvantage them in society and thereby do not give them equal opportunity...

It feels dang good to be on the right side of history on this one.