A Thought on Reactions to the SCOTUS Ruling

Over the weekend, I — like many of you, undoubtedly — witnessed a lot of reactions to the Supreme Court’s decision on marriage equality. I’m sure many of your Facebook feeds looked similar to mine: lots of rainbow-tinted profile pictures, neutral posts by people who are happy for those who achieved marriage equality, and scorn. 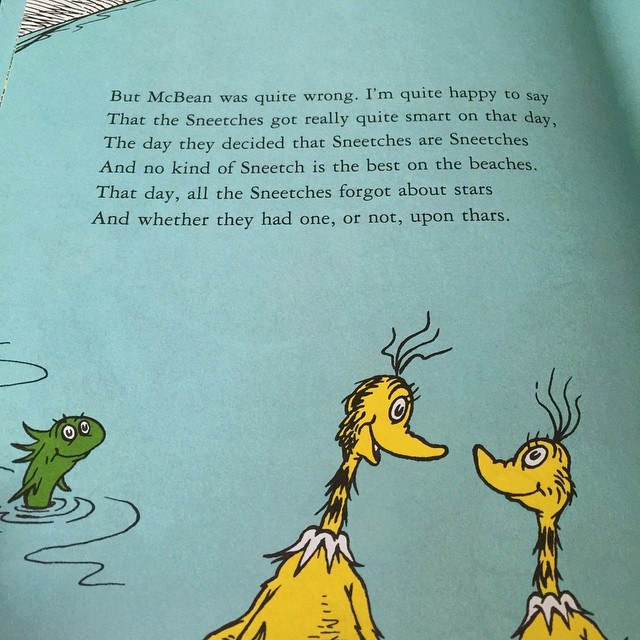 Something that I suppose has bothered me in the plethora of reactions to the marriage ruling is the air of moral superiority that individuals who both favor and oppose the decision have, at times, displayed. While I don’t have a problem with people celebrating the ruling or being upset with it — First Amendment rights grant us that opportunity — the tone people take and how they use it to present their stance can have a decisive impact on how they appear. Neither “In your face, suuuckaaas!” over a judicial win, or “Society is going down the toilet!” over a judicial loss make me likely to give you the Facebook thumbs up. And run for the hills should you decide to enter the comments section of either type of post.

On Friday, after the Court’s ruling came down, I was reading to my son. One of his favorite books at the moment is The Sneetches by Dr. Suess. For those who are unfamiliar with or perhaps have forgotten the story, it concerns two groups of characters, identical in every way, save for one defining characteristic: the Star Bellied Sneetches have bellies with stars, and the Plain Bellied Sneetches have none upon thars. The Star Bellied Sneetches think they’re better than the Plain Bellied Sneetches because of their difference, excluding their brethren and sisters from their activities because they think they’re lesser than those with stars on their bellies. When Sylvester McMonkey McBean rolls into town with machines that add and remove stars from bellies — leading to a circular pattern where Sneetches get stars added and taken off in attempts to be equal and different from one another — chaos ensues until, finally, the Sneetches make an important discovery:

[That] day they decided that Sneetches are Sneetches
And no kind of Sneetch is the best on the beaches.
That day, all the Sneetches forgot about stars
And whether or not they had one, or not, upon thars.

Something about that final page really struck home in light of the Supreme Court’s decision, and the varied reactions I saw plastered all over Facebook and Twitter. I realized that no matter where we stand on the issues, it’s important to remember that we're all humans. None of us is above the other because of our faith, social status, gender, orientation, or access to healthcare. We're all flesh and blood — one human family. Even in our disagreements with each other, especially over issues as monumental as this, it’s important to treat one another with respect.