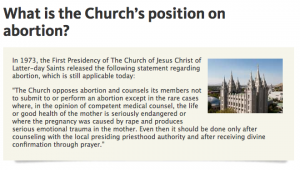 Mormons have an interesting twist on the Ten Commandments. While the Bible says "Thou Shalt Not Kill," Mormons have the added "or anything like unto it." This is typically then used to show that while abortion is not the same as murder, it is "like unto it." There are several aspects of Mormon teachings and practices that back pro-choice views. Let's start by a discussion at the moral heart of abortion: when does life begin? This is the real question at play. Many on the right believe that life begins at conception. Conception is a convenient place to say that life begins because it is definitive, there is no real ambiguity there. Most other 'lines in the sand' for when life begins are blurry. However, this definition of when life begins leads one to views of not allowing for abortions for rape or incest. Indeed if one considers a zygote to be a human being, then neither incest nor rape justify killing the "human being." Also problematic for this view is that the common birth control pill simply prevents implantation of the zygote into the uterine wall. Thus "life" by this definition forms but dies. Yet another problem for this view is IVF. Many zygotes are formed in the process of IVF and few are actually implanted. Most remain in freezers and are eventually disposed. The Mormon Church allows for abortions in the cases of rape and incest, and thus implicitly doesn't view a zygote as a 'human being.' In fact, let's now ask what the church has to say about when life begins. There have been a mixture of teachings on this topic over the years. Brigham Young once taught:

President McKay, in a letter to Tiena Nate on 10/31/34 (in which he says that the church 'condemns abortion' as a 'very sinful act') said regarding when the spirit enters a body:

Undoubtedly the nearest approach we have to definite knowledge on this subject is the statement made by the Savior, 3 Nephi 1:13, wherein he said: "Tomorrow come I into the world." This indicates that the spirit takes possession of the body at birth. Life manifest in the body before that time would seem to be dependent on the mother.

Brigham Young once taught that when children are still-born or when they live just a short time, that the 'spirit' will have a chance to get a new body and have another chance at life. As recorded in Wilford Woodruff’s journal, 15 October 1867, Young said:

Mortality is fully upon us when we first breathe the breath of life.

Granted, all of the previous quotes don't dictate official church views. Even ideas repeated by many church leaders do not dictate church doctrine. So perhaps the strongest evidence that the church doesn't view a fetus as a human being isn't in any quotes or teachings, but rather in church policy. Those familiar with Mormon practice know that the church looks towards an ideal universal salvation while rigidly holding to the view that one must be baptized to be saved. To harmonize these views, the church performs baptisms and other sacred ordinances vicariously in behalf of all people who have died. The church has the lofty goal of doing this for every human being who has ever lived. The church teaches that children who die before age eight do not require baptism as they are automatically saved, because children that young are not deemed capable of sin. Even with that, children who die prior to age eight are still vicariously 'sealed' to their parents. Sealing is one of the 'other sacred ordinances' which members seek to perform for all human beings who have ever lived, 'sealing' families together forever. This is done for all humans. The church policy however is that no ordinances or records are kept for stillborn children. So implicitly the church does not view a fetus as a human in need of such an ordinance. Thus we see that based upon many statements from Mormon authorities and in church policy and practice, the main issue at hand in abortion falls towards the view on the left, that human life doesn't begin until later in gestation (if not at birth). The Church’s stance is significantly more complicated than either the pro-choice or pro-life stance. If we want to parse the church's official statement on abortion, we see that

the Church opposes elective abortion for personal or social convenience, and counsels its members not to submit to, perform, encourage, pay for, or arrange for such abortions.

The official Church statement on abortion ends with this:

The Church has not favored or opposed legislative proposals or public demonstrations concerning abortion.

A summary of the church policy might be that abortion should be avoided if at all possible, but that abortions are allowable under certain circumstances and after counseling with priesthood leaders. This approach is not a legal solution. It can't be enforced in a legal realm--it requires ecclesiastical leadership, revelation, and personal relationships. In fact, Mitt Romney actually did a great job articulating how this view could justify a Mormon in taking a pro-choice stance and still remain in the church’s good graces:

So in summary, the purpose of this post is not to say that all members should be pro-choice, but rather to show that one can be pro-choice and a faithful Mormon. I presented many quotes from church authorities indicating that human life doesn't begin at conception. I discussed church policy which implicitly backs this view. I discussed the church's official stance and let Mitt Romney explain how the decision to be pro-life or pro-choice should be a secular one (as the church opposes abortion for convenience and is neither in favor nor opposed to legislation related to abortion). I'd like to end with this quote from President Hugh B. Brown:

"Strive to develop a maturity of mind and emotion and a depth of spirit which will enable you to differ with others on matters of politics without calling into question the integrity of those with whom you differ. Allow within the bounds of your definition of religious orthodoxy variation of political belief. Do not have the temerity to dogmatize on issues where the Lord has seen fit to be silent." 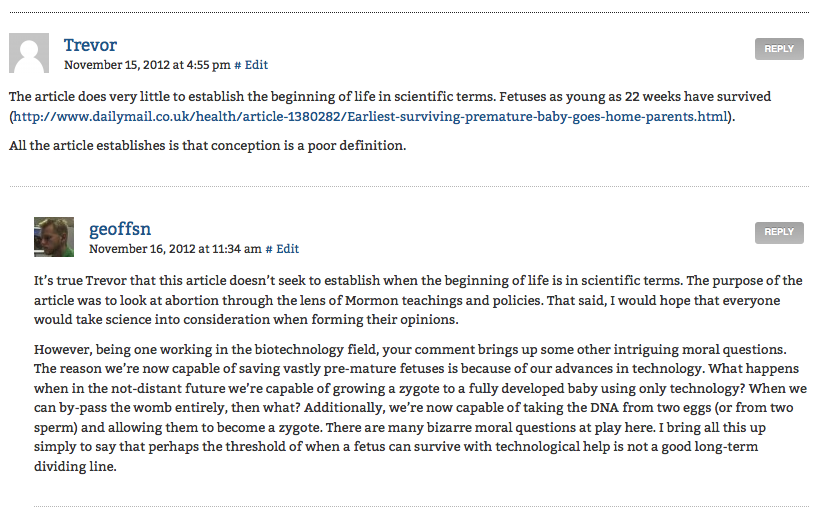 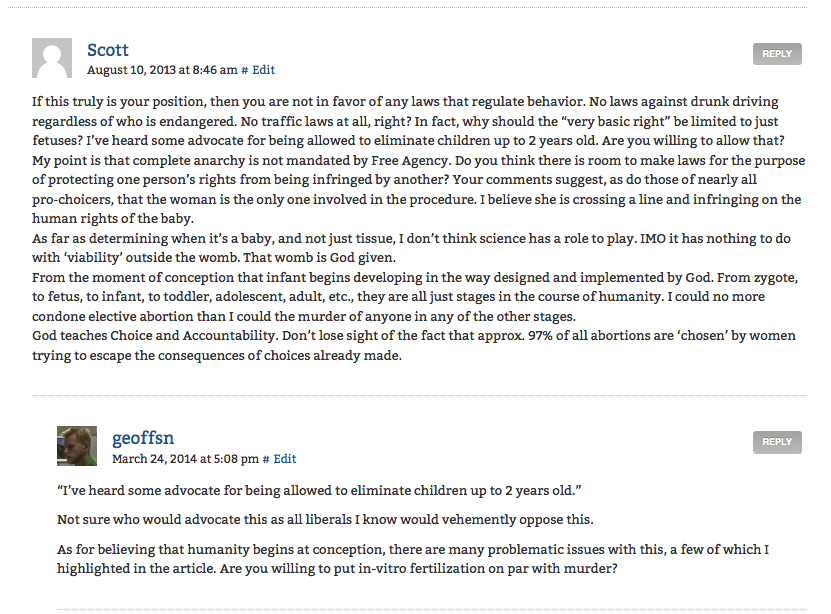 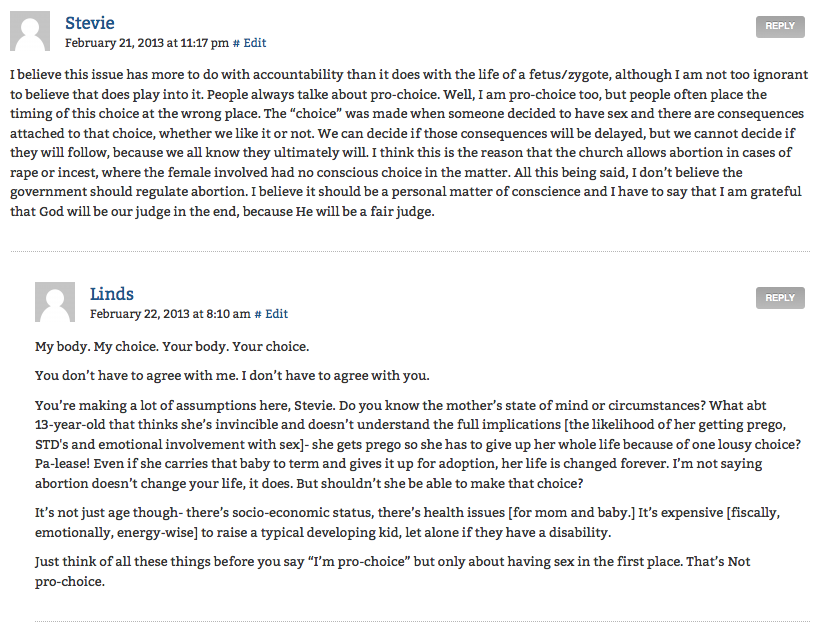 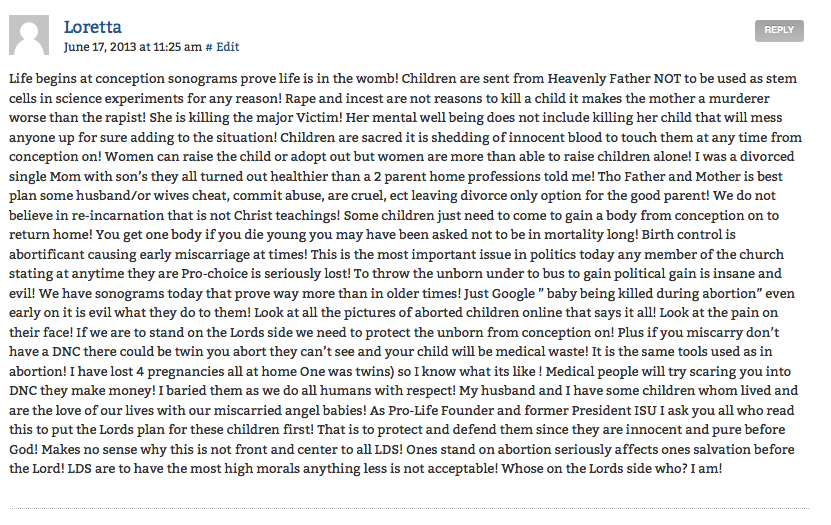 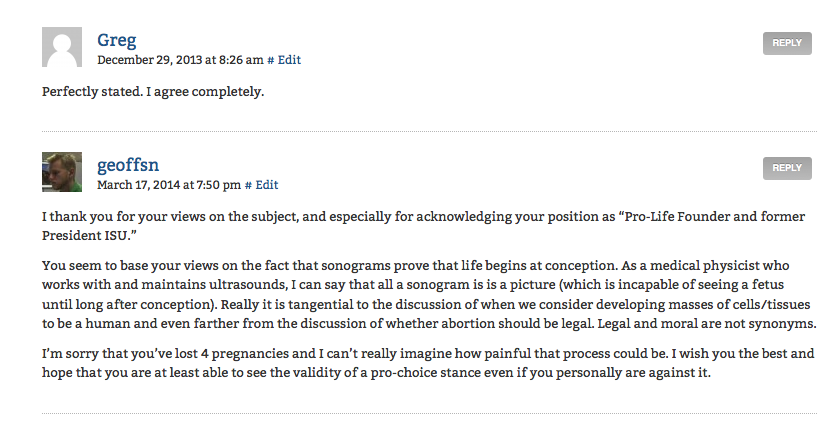 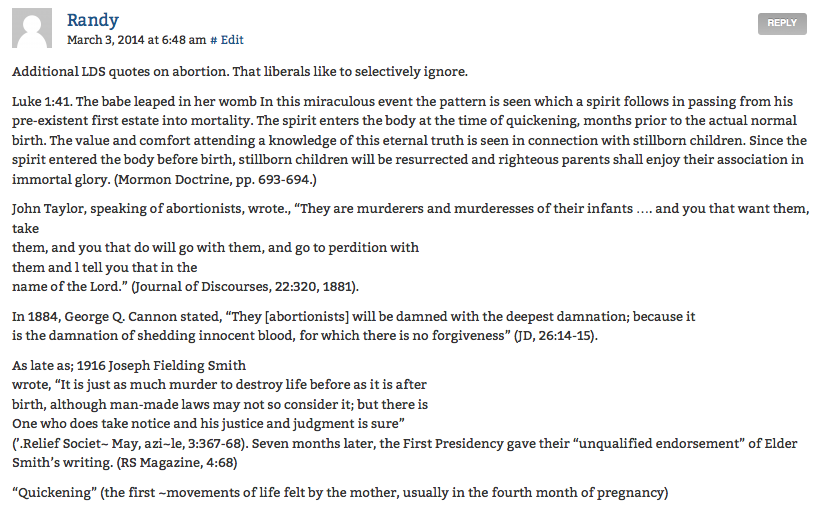 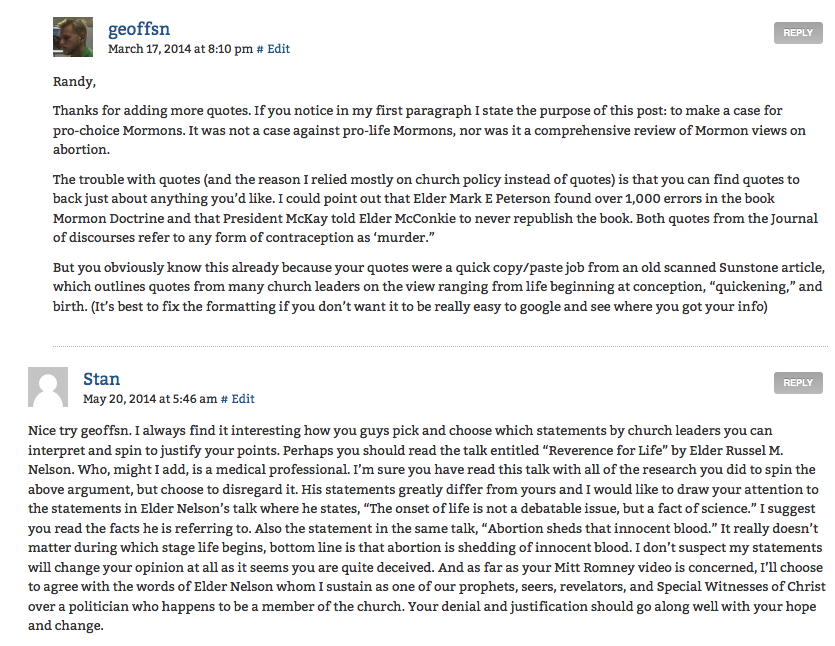 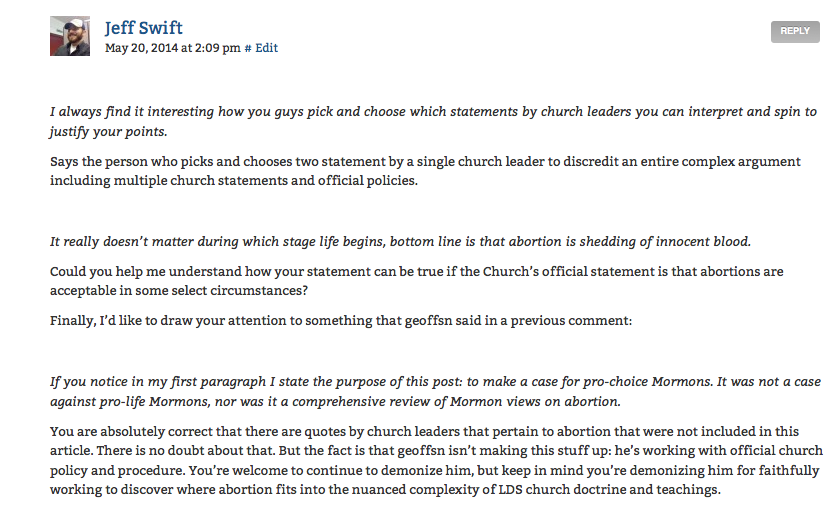 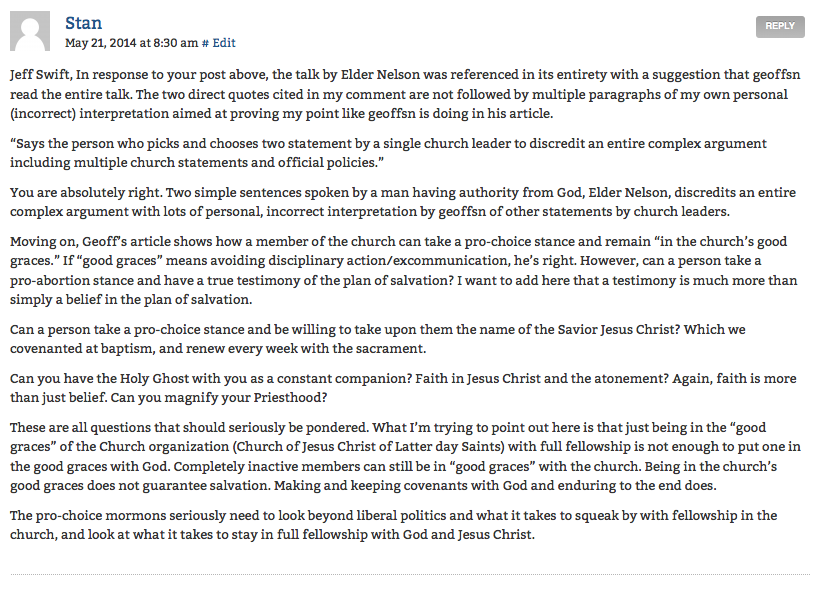 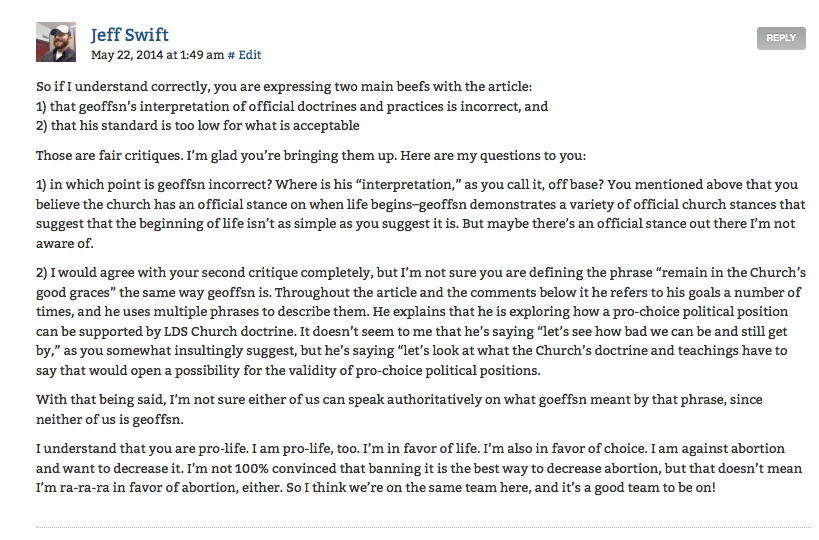