Disclaimer: I'm not saying Bernie's achievements aren't impressive. He took what many assumed to be a gadfly candidacy and turned it into something that will probably get around 45% of the pledged delegates for the Democratic nomination. But now the question is: where do the supporters of Senator Sanders go from here?

In many ways, I can't answer that. Ultimately, the decision will be up to every individual Bernie supporter. (Bernie has some thoughts.) However, one word of caution:

In every cause, in every campaign, there are people who are so committed they will throw reason out the window. They will advocate for things that are dumb, dangerous, or damaging to the cause and ideals they support. As causes and campaigns wither, the percentage of those who remain who are in this category increase, creating a radicalized echo chamber. Aurora Dagny described four attributes of such political echo chambers:

1. Dogmatic. Anyone who questions beliefs or ideas is seen as committing violence. An "in-group" forms around those who share political goals and anyone outside is regarded with, at best, suspicion.

2. Groupthink. Everyone winds up in agreement on a very wide range of issues.

3. Crusader mentality. The cause or campaign in question is the most important one ever. It cannot fail; it can only be failed. People feel intense guilt or shame for not living up to what they think is demanded by the cause. They end up doing things that damage themselves, their family, or their friends.

4. Anti-intellectualism. Details can be figured out later; winning is the most important thing. Evidence that questions the official story must be cast aside or downvoted.

Every campaign has these qualities to a certain extent. These things are the darker side of elements that required for putting together a cohesive team or community. But humility and being open to a wide range of information sources are key tools to avoid doing things that harm yourself or others.

Which brings me to a photo I've seen circulating on Facebook. It had 250 shares an hour ago; it's now up to 310: 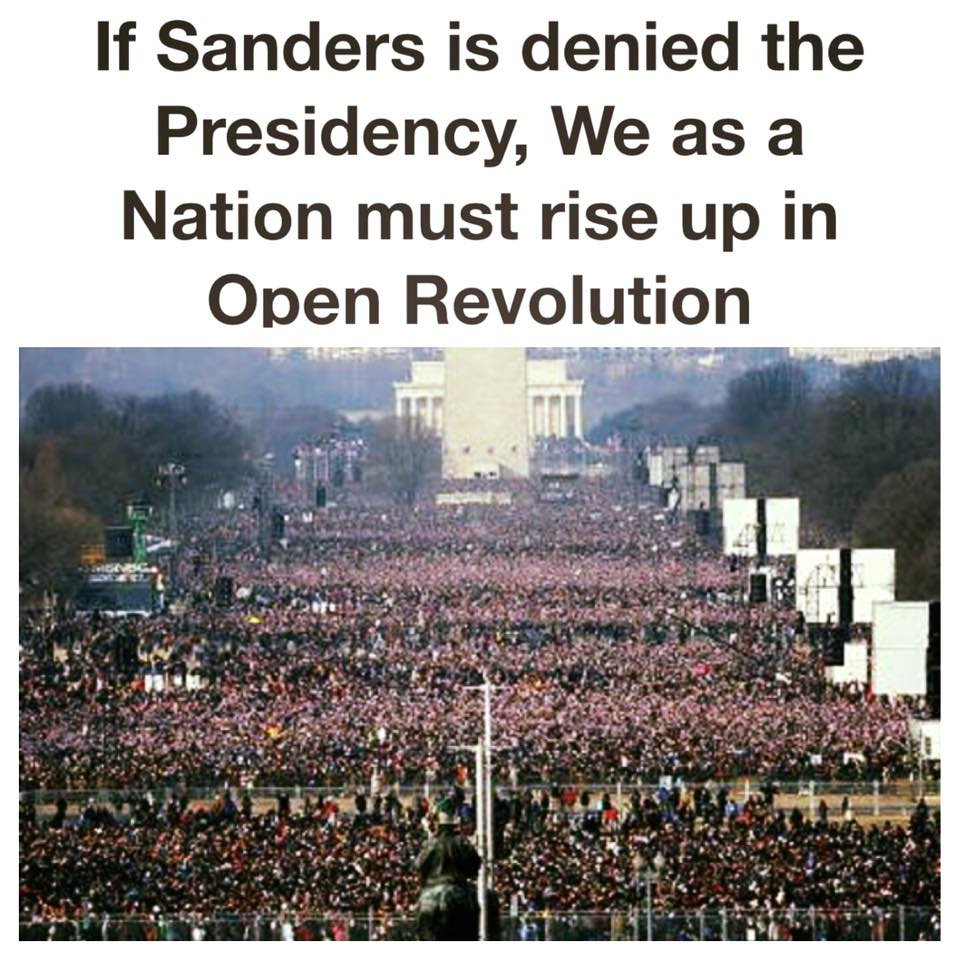 I will leave aside for now the troubling capitalization issues. I will also leave aside the pro-revolution argument (as much as it pains me to do so, as a historian of revolutions as I am).

The premise is wrong.

It's a very tough climb.

A small minority of Bernie supporters are telling a different story. Instead of one where Bernie lost at the ballot box, he was cheated, he was denied his chance, and therefore the system must be overthrown. They're promising to march in Philadelphia (their right, under the First Amendment), and they're also talking about rising up in a less-metaphorical revolution.

While the picture is of a revolution, a peaceful assembly, the political change it depicts is President Obama's first inauguration in 2009. (Source.) The core of Obama's organizing strategy is, in some ways, the cure for the echo chambers Dagny diagnosed. Respect. Empower. Include.

What happened to the 2008 revolution:

The night after this photo was taken, the night after millions thronged the National Mall for the inauguration, key Republican leaders met and agreed on a simple strategy: oppose everything. Oppose reining in Wall Street. Oppose making it easier for Americans to have health care. Oppose any and every measure proposed by the President and the party with Congressional majorities to help the dire economy. This strategy had already been kicked around by then-Senate Minority Leader Mitch McConnell for a couple weeks. Senator McConnell, by the way, is currently spearheading the movement to keep an open seat on the Supreme Court for President Donald Trump to fill, despite President Obama nominating someone who has been praised on both sides of the aisle.

We're still fighting for that revolution, to build on it, to improve on it. But people have different ideas about what's important, and political organizing requires long term strategy and commitment.

I know the maker and sharers of this meme represent a generally fringe opinion among Sanders supporters. I'm grateful for the intense debate about issues and process we've managed to have during the primary season. And we have a few more weeks to go. But after that, it's time to focus on the general election, on building campaign infrastructure that's long-lasting, on organizing for change.

Fighting for political change is good! We shouldn't let disappointment keep us on the sidelines! But we also need to be sure to be intellectually humble, to gather information from lots of different sources, and make sure our investments of time, energy, and money are sustainable for ourselves, our families, and our larger relationships.