I personally want to thank Arizona’s Republican Party.  From the removal of concealed-carry permits, to SB 1070, to radical border philosophy, to Sheriff Joe’s posse, and now the attacking of Senator John McCain, misguided legislators are alienating key voting demographics in the state.  The Hispanic vote is growing leaps and bounds, doubling this past decade and edging close to 30% of the electorate.  Moderates are regularly siding with Democrats over issues like gay rights and immigration reform causing key political strategists to take notice.  Many have switched Arizona from red to purple going into 2016 and believe this transformation will continue for decades to come. 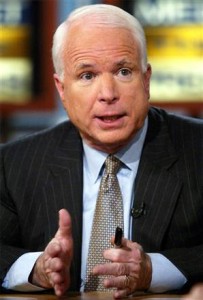 Current voter evolution is lost on our state leaders. Recently Arizona GOP legislators passed a resolution censuring McCain, a moderate favorite, for his “long and terrible record of drafting, co-sponsoring and voting for legislation best associated with liberal Democrats.”  They also used the session to vote on a support measure for non-Arizonan Senators Ted Cruz and Mike Lee. You read that correctly – Arizona legislators wasted taxpayer resources to show support for Senators that do not represent their constituents.  Of course, this misguided political theater is far from the truth as John McCain’s 90% party-line voting record stands on its own.  Probably the most conservative vote of McCain’s career came in 2003 when he, and then-Congressman Jeff Flake, bucked their party voting against a massive prescription drug entitlement program.  That single bill accounts for $17 trillion in unfunded liabilities today and one of the largest drivers of our national debt. In contrast that same bill passed with votes coming from Eric Cantor, John Boehner, Paul Ryan, Tom Delay, Jon Kyl, Rick Santorum, Pete Sessions, Darrell Issa and several current Tea Party darlings.

To be fair, Arizona’s divisional rhetoric mimics what we experience across our nation. Conservatism has been replaced with exclusionary politics that cast aside any politician that does not align with their platforms 100% of the time.  Cloaked under the guise of the Constitution these political radicals are punishing any politician that steps across the aisle, ignoring the entire compromising fabric of our originating document. Such attitudes were on display earlier this year as the country witnessed the full Tea Party agenda as the government was held hostage by a misguided minority.  Such extreme positions were also experienced at local levels as two Colorado State Senators were ousted for supporting the same common-sense gun legislation that Ronald Reagan would have endorsed.

Ironically, embattled Senator McCain’s approach to immigration is the only path that will save Arizona’s current Republican Party.  The Hispanic community is a becoming a force and the Tea Party circus is motivating voters across the state.  One of Arizona’s residents, a national political strategist for the GOP, commented that such extreme actions such as censuring Senator McCain are why “they (the nation) laugh at us.”  I completely agree.  Arizona’s intolerant primary voters will soon see the same phenomenon experienced in Nevada, Delaware, and other states where extreme candidates were traded for moderate Democrats, which I will applaud.