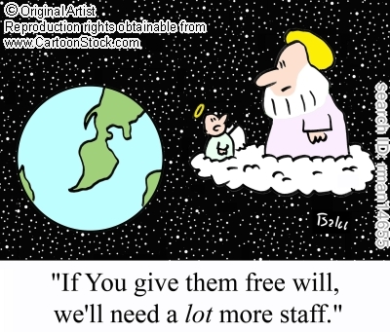 In recent weeks I have been part of several discussions with conservative Mormons about how the proper role of government should intersect with Christ’s commandment to take care of one another. A common point that keeps coming up is “free agency”. More precisely, my friends object to the federal government requiring citizens to contribute to social programs, as they feel that it is a violation of their free agency to choose how they will (or will not) contribute to the temporal wellbeing of their brothers and sisters in need. Yes, we need to help take care of the sick and afflicted, they agree, but the government shouldn’t force us to do it, rather it should be a matter of individual initiative and obligation.

What I found most frustrating was the fact that I knew these people support the government restricting our individual agency in hundreds of other ways each and every day, because they recognize that it is for the public good, and often in support of a larger moral imperative. Speed limits, bans on indoor smoking, age limits for alcohol consumption, mandatory education for minors, and the list goes on and on (much to Ron Paul’s dismay, I’m sure). Most Republicans support these types of common-sense regulations that all have one thing in common: they restrict individuals’ free agency in the name of the common greater good.

And then there are more controversial restrictions of individual free agency that many conservative Mormons support: a ban on same-sex marriage; public decency laws limiting the display of pornography; keeping personal drug use illegal; and changing current law to make abortion illegal even in the case of “legitimate” rape. ‘Yes, these are restrictions to free agency,’ conservatives would agree, ‘but they are necessary on moral grounds!’

I understand the ‘moral imperative’ argument, and unlike many other liberals, I do believe that it is appropriate to acknowledge the role of personal morals when discussing public policy. What I cannot understand, however, is why so many conservative Mormons fail to see poverty, hunger and homelessness as being worthy of morally-anchored government action. For some reason many conservatives believe that it is appropriate to arrest an individual for using drugs in their own home (requiring tax payers to pay for their incarceration), but it is not appropriate to require citizens to contribute to poverty alleviation programs that address hunger and homelessness.

This selective defense of free agency by conservative Mormons is particularly baffling given what I know of our common faith. The scriptures commanding us to take care of one another are too numerous to mention. So why is taking care of each other less worthy of a government mandate than, say, not allowing two men to get married? Both are issues with a moral component, both are relevant to our larger society, both include an element of the government deciding what individuals may or may not do. It seems like many conservatives are only concerned about the government limiting our freedom to choose when it has to do with their wallets.

Do the freedoms that Republicans hold so dear include the freedom to pursue an education if you were brought to this country by your parents illegally as a child? Not so much. The freedom to have safe drinking water if you live in coal mining or natural gas country? Well, maybe not that. The freedom to worship in a mosque without being spied on by law enforcement, when no illegal behavior was ever detected, or even alleged? Now that is going too far!

The hypocrisy and selective nature of the freedoms and rights that Conservatives choose to idealize is mystifying. But alas, none of this is new, as the GOP has been at it for decades. It is just disheartening to see Romney and other conservative Mormons, with whom I share a common gospel centered on loving your neighbor, buying into it so wholeheartedly.
Class Warfare Contributors Democrats featured mormons poverty Republicans
Do you like this post?
Tweet