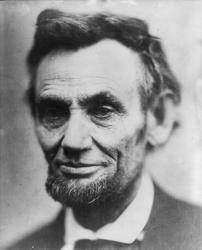 son to the importance of freeing the Slaves. And shutting down the government is nothing at all like Civil War. But the principles are exactly the same.

President Obama came in inexperienced and made mistakes - so did President Lincoln. But they both promoted the overriding principle of Constitutional government of, by, and for the People - all of us People - not any particular faction, party, or philosophy, except for this: The Constitution is not some stale, old parchment perpetually framed in the National Archives and in the context of the 1700s. No, there is relevance today for the principles that "all men are created equal, that they are endowed by their Creator with certain unalienable rights, that among these are Life, Liberty, and the Pursuit of Happiness." All our individual ideals and aspirations have value as we learn to work together within the framework for government that our Founders were inspired to construct. And those principles should last for the eternities.

Ponder those words again, “all men are created equal.” Well, for one thing, it now includes women, too - and children. The 'all' also has a bit more meaning than it did originally. It's not just white male property owners anymore. Go find those words in the Constitution! (Spoiler - they're not there!) No, those words come from the brain and pen of Thomas Jefferson who wrote the Declaration of Independence (in committee with Ben Franklin, John Adams, Roger Sherman, and Robert Livingston). The concept has always been important to the American Spirit, but those words were not in the Constitution. There needed to be a phase-out of the concept of State Power as opposed to the rights, protections, and even responsibilities of individuals.

The genius of Lincoln is that he fused the principles of the Declaration that God created all people equal, with the structure of our Constitutional government so that all the people have a chance to participate freely in representative self-government. As I said, Lincoln made mistakes. He admitted at least once that he had to break the Constitution in order to save it. And he was willing to stretch Constitutional power - but not beyond the breaking point - to save those holy principles upon which it was founded.

There are still people today who criticize Lincoln. And at the time, he was far from popular. He didn't even win a majority of the vote or the Electoral College to become President. He won in a plurality. Even in his own government and party, he was called a tyrant, dictator, even "gorilla." And, of course he felt the assassin’s bullet from a son of the South who cried out the Latin version of "This is how we deal with Tyrants!"

So here we are. Maybe you do not like our Constitutionally-elected President. But he is the President, twice-over, by Constitutional means. The Affordable Care Act is still controversial, as was freeing the Slaves. And while not nearly to the same level of “freedom,” the ACA has passed Constitutional muster. And it does appear to promote the promise of the Declaration that we should all be able to access the means to life, liberty, and happiness. It is much like Social Security and Medicare, both highly controversial at the time, and now part of the Constitutional law of the land.

The other day, I felt the turmoil, heartache, anger, and fury (fortunately still without the bloodshed) of Major Robert Anderson when Edmund Ruffin fired the first shot at Fort Sumter. A lot of people blamed Lincoln for that and it is true that he manipulated the situation to ensure that South Carolina fired first, but only after it and many other southern States had violated the Constitution and stolen federal property including forts and arsenals.

A lot of people blame President Obama for excluding WWII vets from the memorial they had come to see. I'm glad they got in. But what infuriated me was to see Representative Michelle Bachman and other Congressional Republicans glorying in the shutdown and exploiting the visit of these WWII veterans for their political gain. The Department of the Interior, my Department, graciously allowed the veterans in. Yet, my anger remained. Was Michelle Bachman going to take care of the workers and review the contracts to clean and maintain the Monument? Would she process the tort claims in case any of those aged vets slipped and fell? Would she clean up any graffiti left by gang members that slip in at night? Would she appropriately deal with additional protests or demonstrations that converge on the site? (without seeking her own glory, of course). You see, you cannot have a memorial to honor veterans unless you are willing to pay and take care of it. I rather ungraciously posted on a dear friend's FB posting last night in my fury. I said in defense to his plea to respect the vets, "THAT's what my job IS!" And Bachman and the rest of Congress are keeping me from it.

(OK, so I've never worked on that particular monument, but someone in my office does, and I have worked on many others.)

And here's the deal. My friend was hurt. He said I should have messaged him personally and maybe I should have. We both apologized for the terrible misunderstanding and our offenses that we had taken. We came up with the idea that he would post another picture of the Vets without Bachman in it. I said I would not comment. You see, people of different ideas and backgrounds and perspectives can work together to compromise and come up with something that is good for both and for the larger good as well.

God bless these United States and every one of us, the People.