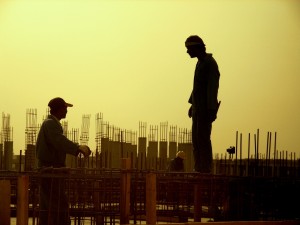 I actually believed it.  I worked hard.  I put in extra shifts.  I did jobs that no one else would do.  By the end of my annual stint at the grocery store, I realized that working like the head manager equaled three things—a dysfunctional family, alcoholism (he was addicted to the bottle), and a temper that was out of control.  To get to the top, you had to work 60-70 hours a week.  The yelling, the abuse, and the firing of employees (some who had worked for the popular Utah Company for 30-35 years) left me incensed.  On top of that, I was broke.  It wasn’t because I didn’t know how to save.  I do.  It was because the minimum wage that I was making wasn't covering my basic needs—an apartment, a little food, and gas to get me around town.  I was constantly in poverty and no matter how many courses the Dave Ramsey disciple taught in priesthood, I still wasn't meeting my needs.

The summer after my experience at the grocery store, I decided to get a work visa to the United Kingdom.  I joined the (British University North American Club), worked in the United Kingdom for a year, and had an exceptional experience.  The healthcare was excellent.  I had a job that provided me with an apartment, food, and time off to visit other parts of the country.  Not only that, even though my job was grimy, I was treated like a human.

When I got home in 2001, I plugged away.  I worked hard.  I went to school, graduating from Weber State University in 2004.  I got married.  I started a family.  I experienced life and realized that it wasn’t like Ronald Reagan and other Conservatives had told me it was going to be like.  I found out that the system is rigged.  No matter how hard an American works, the promise of stability, a place to live, and money to support a family isn’t there.

Years later, I became a head manager of a large American retail store.   I worked hard.  I put in long hours.  I worked Christmas days and overnight shifts.  I worked like an American.  I made my store an example for the rest of the district.  I made my decision to leave after I did something dishonest.  I let a few employees go because it was a requirement by the District Manager.  We were cutting back right after the economic collapse of 2008—but instead of paying them unemployment, like a responsible company should do; I had to find creative ways to fire them without causing unemployment to fall on the burden of the company.   According to them, “It’s what a good manager does.”

If an employee was ten minutes late, I wrote them up.  If an employee wasn’t always happy when an angry customer approached them, I wrote them up.   If a ridiculous sales quota wasn't met, they were written up.  By the end, I was a total wreck.  I had become the store manager I had dreaded becoming.  I was a bully and I was smart enough to eventually see how the corporate structure worked.  It's a business model that screws the individual and benefits the company.  It's how things work in America.

“Are you honest in your dealings?” my Branch President asked me in my temple recommend interview.

“I've done something awful.  I followed the directions of my district manager and fired five people.  They won’t get any benefits and most of them were barely scraping by. ”

He consoled me and gave me some advice, “Capitalism is a great system and it’s inspired by the Lord.  You were doing what you were told to do and that’s your job.”  Somehow it still didn't sit right with me.  A few weeks later, I approached my district manager about what we had done.  Two weeks later, I was out of a job during the Great Recession.

Inequality and how our workers are treated in America is a question for our generation.  For me, it’s a moral and religious question.  Have we been honest with our dealings towards our fellow men and women?  Does it benefit our Church to have a membership that’s paid “slave wages”?  In a Church that works because of the sacrifice of time from its members, does it really benefit the American Church to have a membership that devotes more hours to their jobs than ever before?  Are we treated right in America when it comes to parental leave, benefits, and retirement?

I was always taught that if someone works hard in this country, you will be able to take part in the American Dream.   I’m not sure.  I’m as frustrated as anyone when I look at the statistics, the news, and the constant stories of wealth inequality and poverty that have struck our nation.  We have been here before—when our pioneer ancestors were the victims of railroad barons, bankers, and fraudsters.  Many of us have turned around and become the equivalent of those past pariahs that controlled our country.   Even within our own Church, good leaders and some Mormon politicians have bought into proven failed economic policies that have created poverty and brought great inequality to our members and the state of Utah.  Church members have never been accused of not knowing how to work--but following the Republican elephant is not leading us to Zion and happiness. 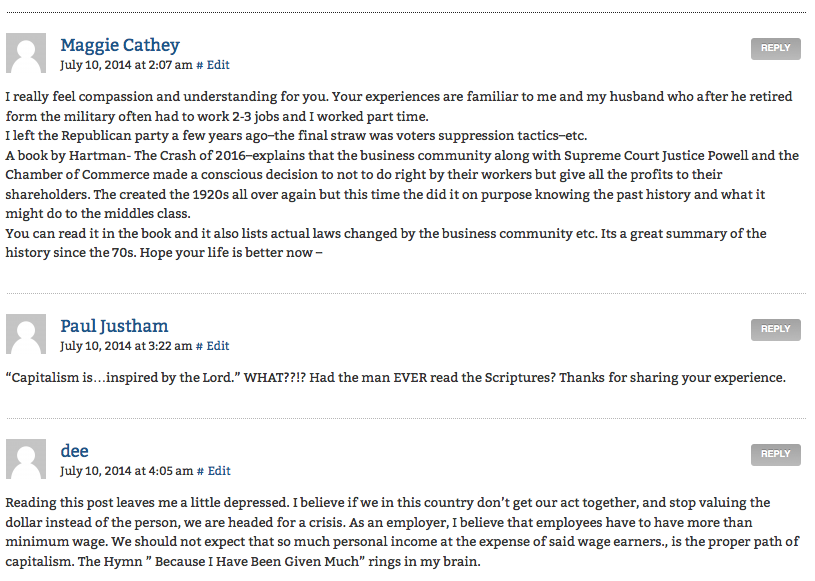 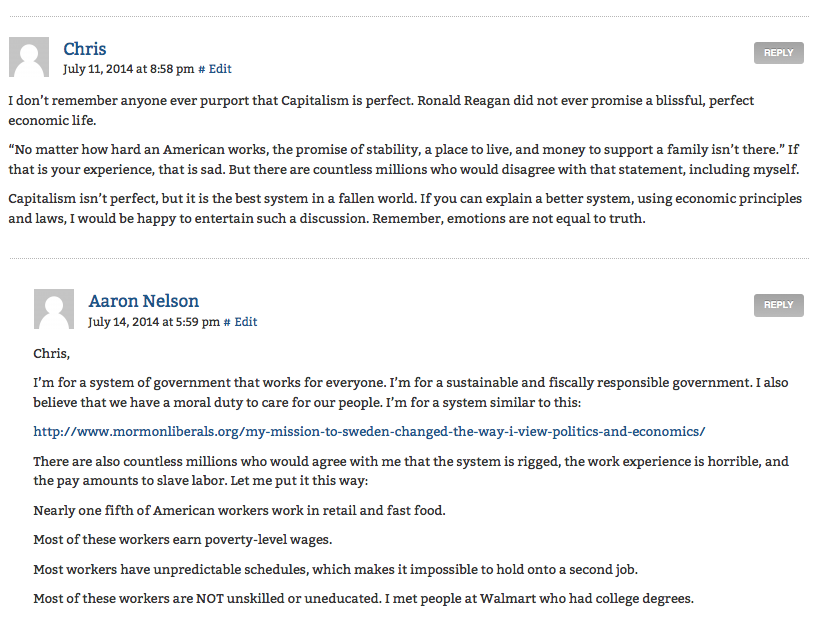