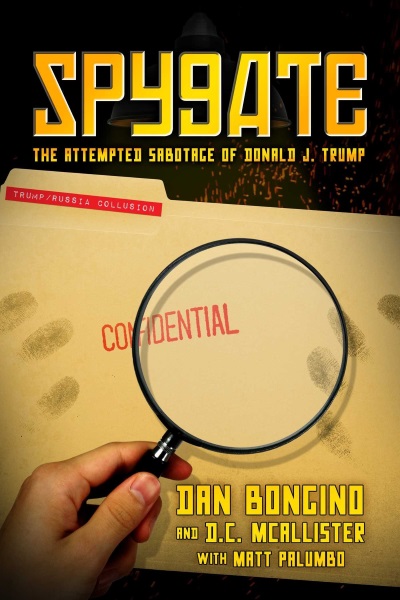 Not long ago a Republican friend of mine asked me to read a book.  Being the bookworm I am, I took him up on the offer.  The book was Spygate: Exposing the Obama/Clinton Deep State Criminality.  I do love a good read, and I often look for books and articles that will challenge my political conclusions.  This book presented just that challenge.

I started out writing down some things wrong with the arguments the book presented.  Here are a few examples from the first few pages:

I noticed that after several hours of reading with deep research and intensive internet searching, I was only on page 20.  At this rate, it would take me a year to finish the book.  So, I just continued to read without taking the time to write down discrepancies or logical holes in the book.  Reading that way, it was an easy and fast read, which is a little disquieting in itself.  It would be easy with this kind of book to manipulate a trusting person into thinking this book is telling everything, when it most certainly is not.

After finishing the book, I started to take a philosophical approach to this information age we live in.  One would think that with more information, people would come to a consensus.  For example, when I was growing up my friends and I would quiz each other on various trivia.  We’d wager a nickel or so on who was right, then go ask a grown-up to tell us what was true.  Now we wager nothing, because we all have the information in our pockets.  We all can look up the truth or fiction of anything, anytime.

This deluge of information hasn’t helped us in the political realm, however.  Despite anyone anywhere at any time being able to look up information on Donald Trump and his dealings with Russia, his sickening quote about groping married women, his escapades with porn stars, his making fun of military families who’ve lost their children in battle, his call for keeping an entire religion out of the United States based on their religion, his antipathy towards immigrants, his racist and criminal background in his real estate businesses (and those are just things I came up with off the top of my head), Republicans still elected him president.

This reminds me of Paul’s words to Timothy about those of us living in the last days; specifically, that we would be ever learning, and never able to come to the knowledge of the truth.

With Facebook and other social media news outlets reinforcing our proclivities, we fail to see how our conclusions can be wrong.  We can read entire books composed of narratives leaving out opposing positions, then go to our Facebook news feed and read news articles that back up our suppositions.  For all we know, everyone in the world is getting the same information.  In reality they are not.  Indeed we each live inside our own bubble of information; leaving occasionally to argue with a Facebook friend, only to come back to the safety of our confirmation-bias-reinforcing information shelter.

Lehi counsels, it must needs be that there is an opposition in all things.  If I am only reading what I agree with, no opposing viewpoints being rendered, then I will never come to the truth.

Recently a friend of mine reached out asking for political research process and how to get informed, unbiased political information.  My advice was:

Of all the things I think I needed to know, this book taught me that someone can take good information from good sources and still come to incomplete or one-sided conclusions.  It also taught me that I should look at my own biases and sources to make sure I am not falling into the same trap.