Lies Do Not Become Us 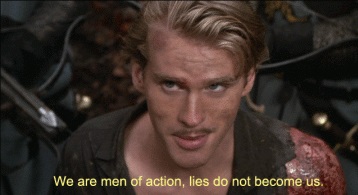 Growing up, a favorite movie for my family was The Princess Bride.  One of the most memorable scenes came after Wesley and Buttercup, having conquered the many obstacles in the fire swamp, come out the other end and meet Count Rugen and his lackeys who are ready to arrest Wesley and bring Buttercup back to Prince Humperdinck.  After Buttercup bravely gives herself up to save Wesley’s life, a smiling Count Rugen lies about their destination, “Come, sir. We must get you to your ship.”  Wesley replies with the classic line, “We are men of action.  Lies do not become us.”

Also while growing up, lying was not tolerated in my home.  I tried. It never ended well; usually untruths ended with a pitiful confession, as my mother knew the entire truth, the entire time.  While raising my own children currently, lying is still not tolerated.
The American people are not stupid.  We understand when we are being lied to.  During Donald Trump’s campaign, I could see right through him.  I left the party of my youth when I encountered his lies and immorality, as I couldn’t willingly be a member of a group that would vote for that man.  Only now does it seem like the obvious lies are starting to crack through to Republicans. Here are some examples:
According to a recent Deseret News article, a more Utahns now blame President Trump for the shutdown than Democrats.
According to the article, 36 percent of Utahns blame President Trump, while 32 percent blame Democrats.  In the same article, Jason Perry, head of the University of Utah's Hinckley Institute of Politics, said Trump is viewed as provoking the fight.  "What's happening here, at least in the minds of Utahns, is that the impasse is in the hands of President Trump. It was his line in the sand." Perry said.
Perhaps one reason is that before Donald Trump blamed the Democrats, he explicitly, and on national television, said he would take the blame.  President Trump said, "I'll take it.  You know what I'll say?  I will shut down the government.  I am proud to shut down the government."  Shortly after that conference, wherein he personally and explicitly took the blame, he tweeted, "Nancy and Cryin’ Chuck can end the Shutdown in 15 minutes. At this point it has become their, and the Democrats, fault!"  Another sidestep, another lie, another falsehood, and lack of integrity that Utah Republicans are seeing through.
More Republican members of congress are voting with their Democratic colleagues to put pressure on Russia.
According to the New York Times "A group of 11 Republican senators broke ranks with their leadership... to side with Democrats... over sanctions on Russia"  As the lying continues, and becomes more obvious, I hope that more Republicans will join with Democrats in doing what is right for the country.
This could be due to more detail coming out regarding his lies to us surrounding Russia. A recent article in buzzfeed indicates that President Trump instructed Michael Cohen to lie to congress.  While the facts surrounding this article have not been independently verified by the New York Times or the Washington Post, the fact remains that Cohen did lie to to cover up for Trump's public lies.  Kurt Eichenwald, a prominent New York Times reporter explains this in a twitter thread, "What Cohen argues is that [when] he heard Trump's public lies, knew he needed to back him up, and [he] did so."
My Republican friends are having a hard time defending him.
When I began posting articles two years ago calling out Trump, my Republican friends on Facebook would rush to defend him.  This would result in hours spent debating, backing up my claims with substance, logic and reason.  When I post articles now, there is no such debate.  Perhaps this is because I've worn them down... however, I think more likely Trump has become much harder to defend, as his lies become more and more obvious.
In conclusion, I am hoping that the fourth estate (the news media) will continue to shine a light on his trail of lies and deceptions, so that we as Americans can end it, and never allow such a man to be in the White House again.
Do you like this post?
Tweet