That said, I don’t recall canon or Church leaders anywhere or anytime telling politicians how they should make law. In fact the canon (Article of Faith 12) expressly states:

“We believe in being subject to kings, presidents, rulers, and magistrates, in obeying, honoring, and sustaining the law.”

I strongly believe that the moral principles of our faith strongly support the principles in the Constitution; namely that the law shouldn’t treat an entire class of people as second class citizens. To that end, the Fourteenth Amendment to the U.S. Constitution is clear:

"no state shall ... deny to any person within its jurisdiction the equal protection of the laws."

The Constitution is the supreme law of the land. Its edicts are clear: our government must grant all citizens equal treatment under the law. In general terms, this means laws must have a rational basis; they can't simply treat one class or a person differently than others for no good reason.

Some Mormons will try to justify or make rationales for why same sex marriage is bad for the kids, or bad for society. Several "scholarly" articles have even been published to this effect, despite the fact that the mountain of evidence says just the opposite. It is critical here to remind the reader of history. The exact same arguments were used to justify segregation of blacks and other minorities from schools, and to justify prohibitions on interracial marriages.

Using both religious and practical rationales for what we now consider inexcusable discrimination, southern judges often cited societal norms and the behavior of blacks affecting white culture. The Virginia Supreme Court in the case of Loving vs. Virginia even proclaimed that the anti-miscegenation laws were justified in that they prevented the "mongrelization of the white race."

Another important consideration here: regardless of how our society treats gay people (which is how we will be judged) gay people aren’t going to stop being gay. They are going to live with each other, be a part of families, have jobs, and live their lives like anyone else. Not allowing them to marry is just denying them a right the rest of us enjoy.

Let me be clear about another aspect that may trouble a Mormon about same-sex marriage: Allowing civil marriages between gay couples in no way obligates the Church to accept or perform said marriages. These are absolutely separate things. The First Amendment to the Constitution is crystal clear: "Congress shall pass no law... respecting the establishment of a religion, or prohibiting the free exercise thereof."

“All Americans should be treated equally by the law, whether they marry in a church, another religious institution, or a town hall. This does not mean that any religious group would be forced by the state to recognize relationships that run counter to their conscience. Civil equality is compatible with, and indeed promotes, freedom of conscience.”

While we are discussing prominent Mormon political leaders, Mitt Romney also made the case that the Mormon faith doesn’t direct its members about how the law should be, even when it comes to abortions:

“The church does not say that a member of our church has to be opposed to allowing choice in our society and therefore there are Mormon Democrats,”

Watch the whole video below. Mitt Romney makes my whole argument for me from 9 minutes on. He demands that the Mormon Church does not impose its views on society.:

It’s important that we as Mormons are able to make the distinction between the laws of the land and what our religion demands of us personally. Just like the law doesn’t have to reflect the Word of Wisdom, or even prohibit fornication or adultery, it doesn’t need to reflect our current views on heterosexual marriage.

Today more Mormons know and make friendships with gay people, and are learning that they aren’t a threat to the family unit or a threat to anything else we hold sacred for that matter. Indeed, they are members of our own families and dear friends. Fear that some Mormons feel toward the gay community will reside as understanding grows.

It is my testimony that God loves all his children; that He would have us treat each other with love and compassion; and that treating all citizens with equal protection of the law is a principle fully harmonious to the teachings of the Gospel. 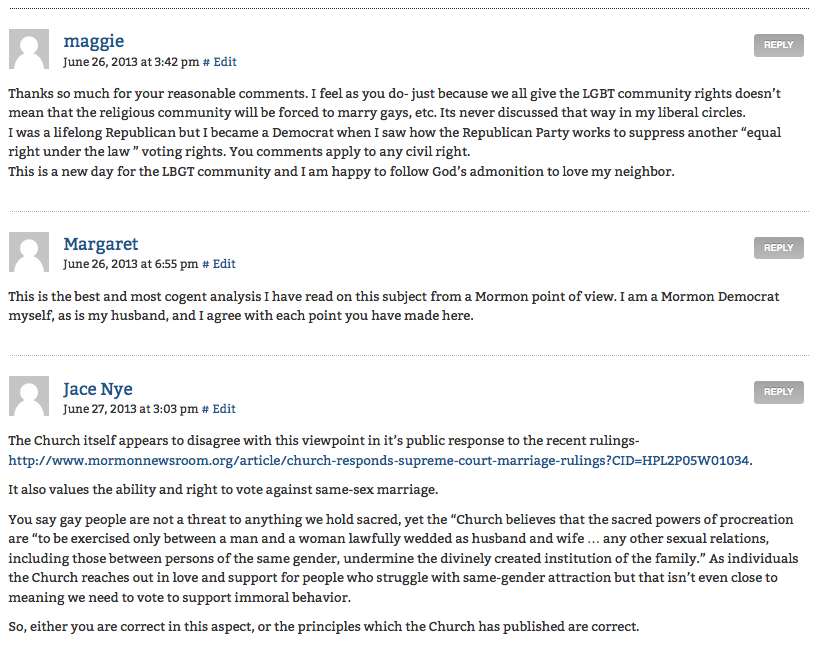 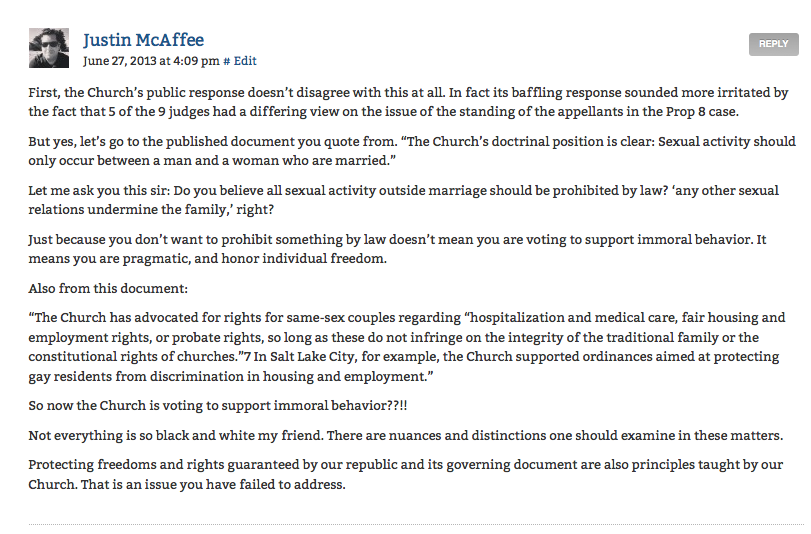 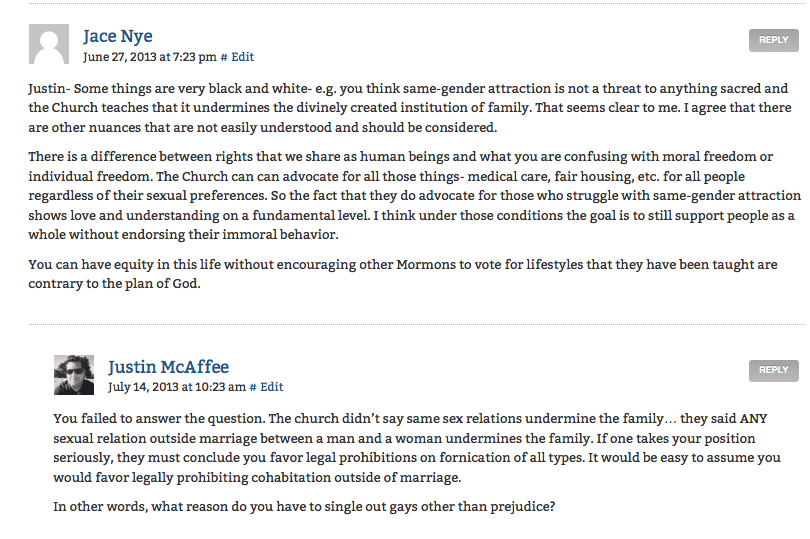 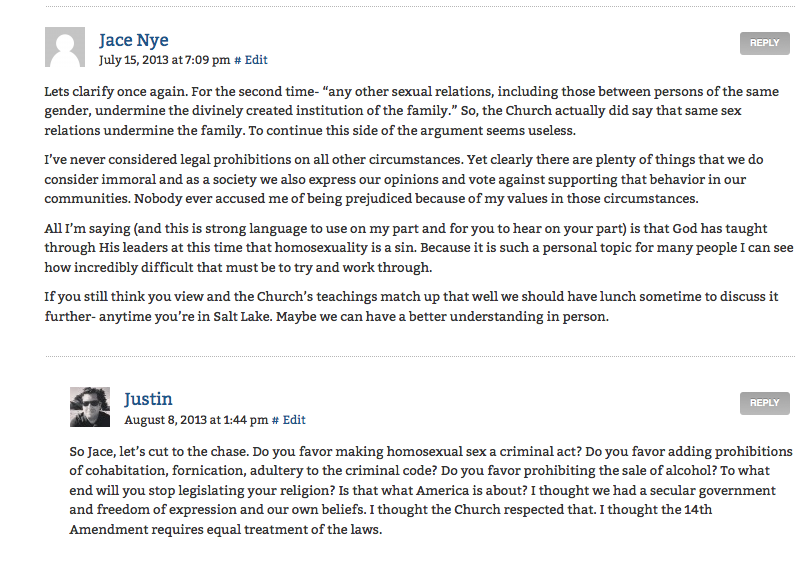 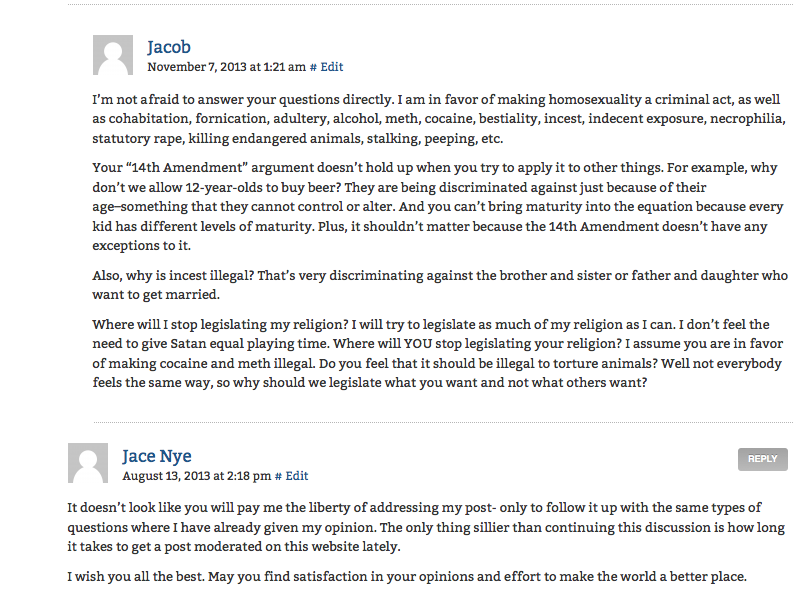 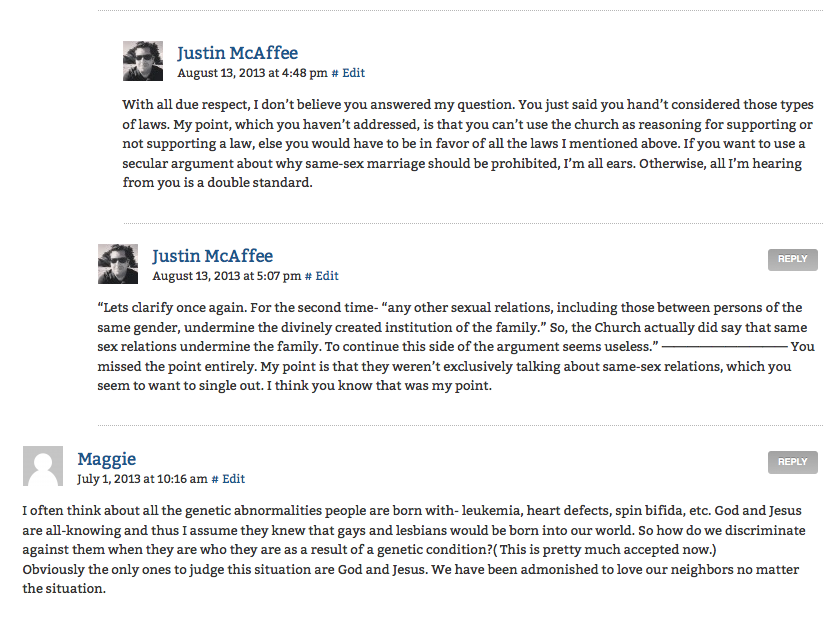 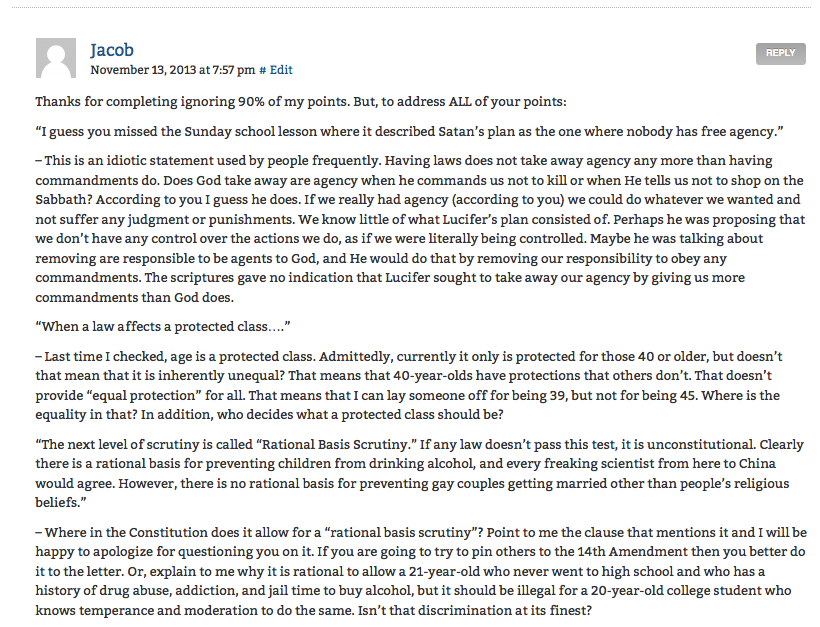 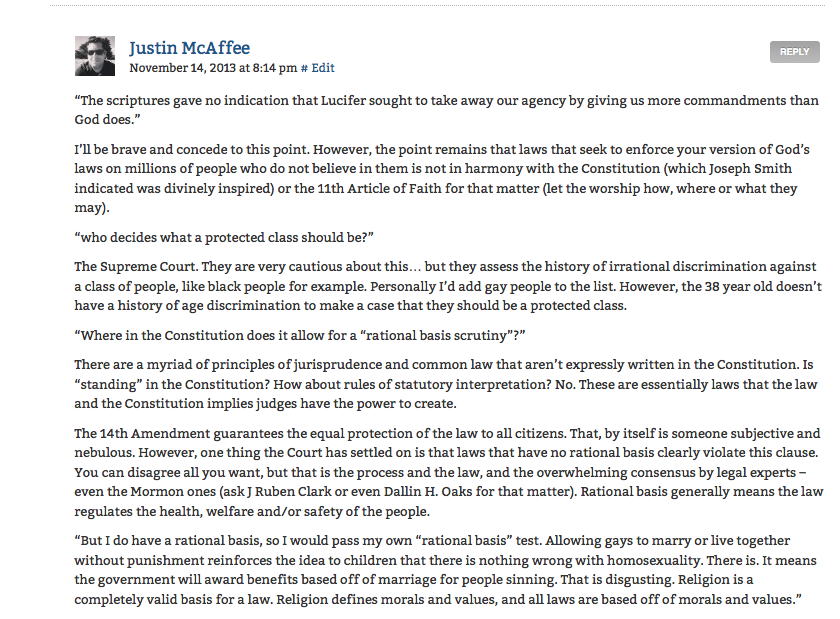 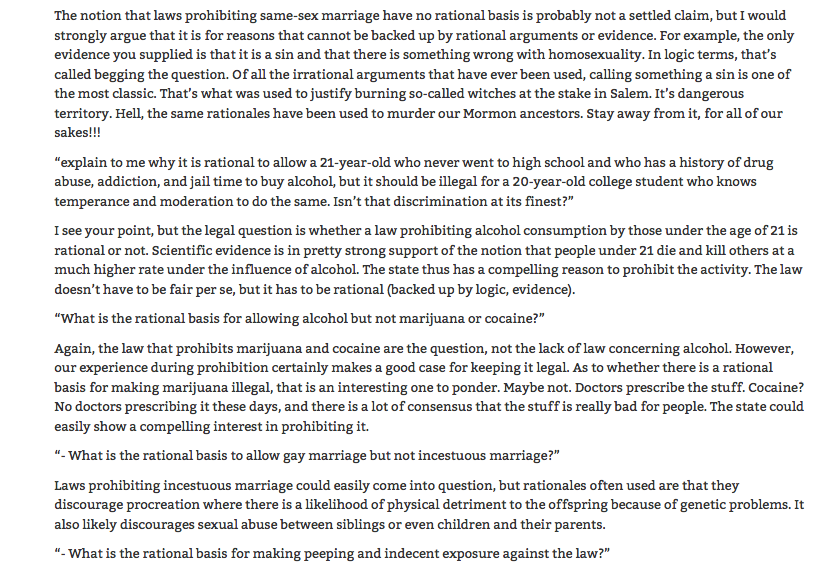 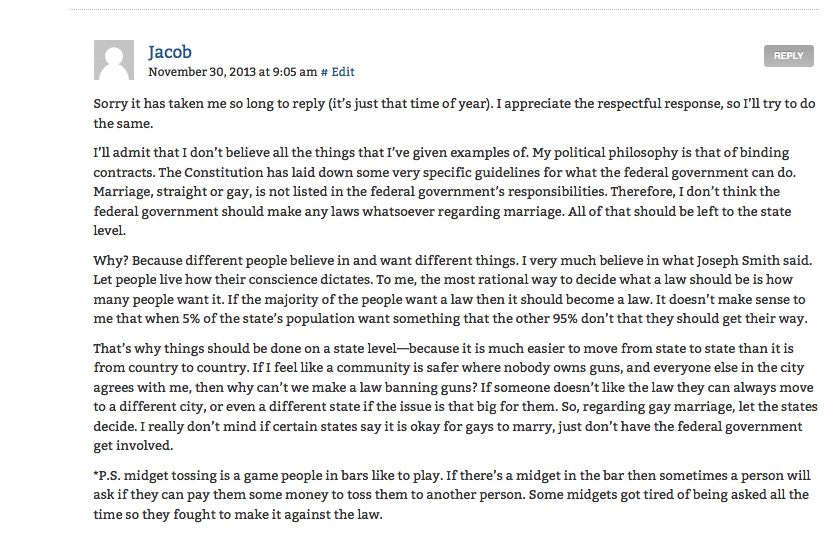 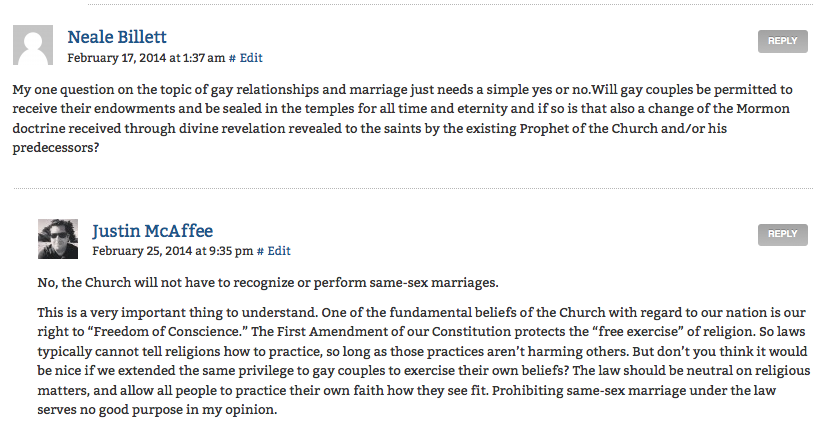 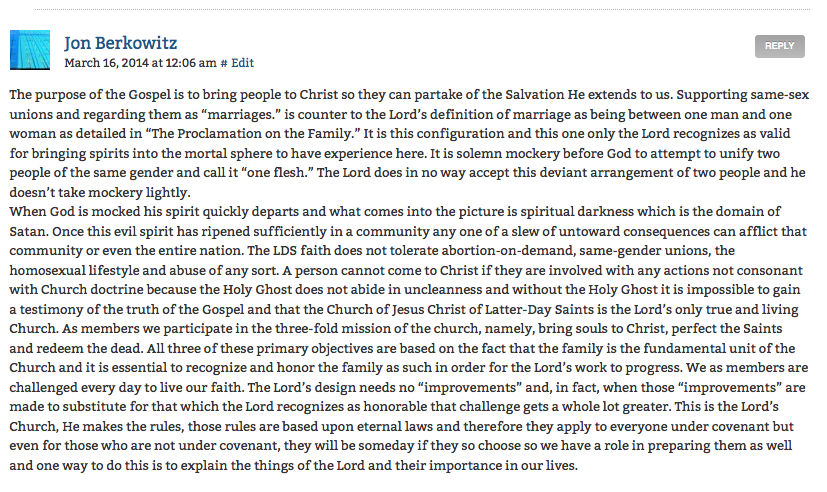 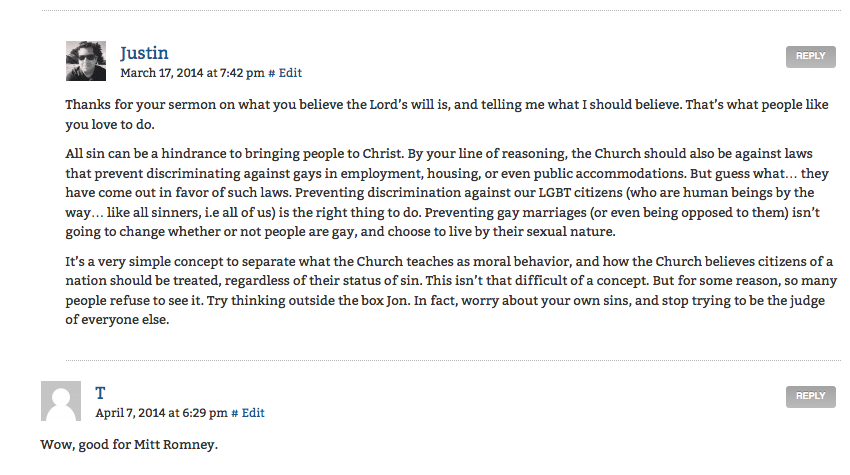