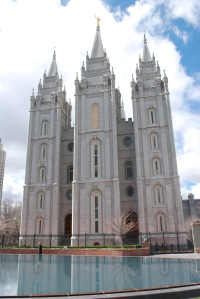 As the election gets closer, the media attention on the LDS Church intensifies.  This month (and this past weekend in particular) we've already seen an article about missionaries on Facebook, the temple garments, and the Businessweek magazine cover (an article about an article.)  None of these articles address Mitt Romney directly, but of course without his campaign, the attention on the Church would be much diminished or non-existent.  We at Mormons for Obama have received attention as well - we've received a few mentions on different online articles and news reports.  (Salon.com, RealClearPolitics.com, and also here on this Boston local news channel.  But don't blink, or you'll miss it!)

We Mormons are everywhere - all over the internet, TV, (and in some cities - on billboards and the sides of buses) - and never have we received this much scrutiny... and so it is with cautious footing that we run this website.  We say this because our hope is what we do here doesn't put up a wall between ourselves and other more conservative or Republican-leaning Mormons.  We appreciate and love them - (and hopefully not in a patronizing, we-are-better-than-you, way.)  After the dust of this election settles, we will still be at church on Sunday mornings worshiping with our fellow Latter-day Saints, regardless of who they voted for the previous Tuesday and regardless of who wins.  But we don't want to miss this opportunity to represent the strong ideals and beliefs of those of us who will be casting our votes for President Obama.

We received this email from Stephen, who happened across our site, and we believe his comments help to shine light on much of our reasoning in putting together this website:

Thank you for putting up this website. I am not LDS, but I have known quite a number of people who were, as I'm from the Pacific Northwest and was an avid genealogist before the Internet changed the game. With but one exception (in the Army) all (Mormons) that I've met have all been kind, generous, and humble - stunning examples of people who live a good life, performed good deeds, and treated others with respect. They were emissaries, living examples of people who truly aspired to be more like Jesus Christ. The "countenance" described in a recent post is something that even I found easy to spot. I've been in Southern California for some time now, and rarely meet Mormon people here. My memories are faded, and they have been tarnished by what I have seen in Mitt Romney. He has not shown himself to be one who cares about people. His lack of concern for those in need--particularly those his own actions have put in need--really surprised me. I was left to wonder if I had drawn the wrong conclusions. I know everyone is different, and one man is never an example of an entire group, but the writings, and even the very existence of this webpage affirm my early impressions. Reading here has been like Romney tarnish remover.

Thanks again making this effort, and for reminding me of truly good people I had long forgotten.

And thank you Stephen for your kind email, and thanks for giving us permission to post it here.  This political campaign still has some months to go, and we hope that we can continue to participate in the dialogue and discussion of the issues - and we hope that we can do it in a way that is respectful and inclusive of those who believe differently than us.  But clearly, we are not perfect - and so we are trying to do better.

So once again, I am looking over the Mormon Ethic of Civility - an article posted on the Mormon newsroom feed back in 2009.  This is the perfect navigating tool for Mormon Dems and Pubs when it comes to engaging in political discourse.

Also, I really enjoyed this piece by Walter Kirn, the author of Thumbsucker, my favorite (Non-Deseret Book) Mormon fiction after Levi Peterson's The Backslider.   The kindness and inclusiveness of Kirn's Mormon roommates and friends is what we offer each other.  I also found this piece on MormonDems.com entitled, "Stop the Madness!"  We might use this as a reminder of how to bring unity between Democrats and Republicans (inside and outside of the Church.)  And if we are still wondering what we can do to better represent ourselves as Mormon Democrats, we might watch this YouTube video featuring an amazing Utah Mormon Democrat; we all know about Harry Reid (and we aspire to be like him,) but Brian King, member of the Utah State Legislature, is a great example as well: