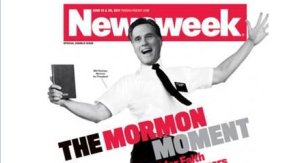 Super Tuesday is over, Santorum took Kansas yesterday, and Romney got Wyoming (and Guam and the Virgin Islands); he continues to inch closer to Republican nomination - line upon line, precept upon precept.  And in order that I might contradict my last post, I offer up this post script:

While it might seem less likely that I'll have the opportunity to be offended by the Republicans for picking Santorum over Romney, ultimately I wish that the Romney candidacy was done or that it had never happened altogether.  This Mormon moment is going on for an eternity, and I feel a tremor in the Force.

Mostly, I don't like the scrutiny.  With Romney in the spotlight, the news media is looking to report on anything and everything about the Church; seriously, if there is anything sensational, ugly, or that will make a good report or newsworthy (or not) they seek after these things.  Check out Friday's op-ed piece in the Huffington Post that asks, "Is Mormonism a Cult?" The good old days of the Salt Lake City Winter Olympics are gone, back when the Church had published ideas for stories on Mormons for the media to use when reporting about the Church.  Now the talking points have given way to the Mormonism: Getting it Right feature, and Mormonism 101 which includes a FAQ section that addresses many of the queries about Mormonism, (i.e., "Do Latter-day Saints believe that they will 'get their own planet?'")  Personally, I would prefer directions from the brethren that sounded something like "duck and cover!" "drop and roll!" "hold on tight!" or other words of wisdom from a Tornado Survival Guide.

This oversaturation of Mormon stories in the news and popular culture leaves me feeling defined, boxed-in, stereotyped, and judged.  My discomfort is increasing with each new online article or blog post, and I am patiently awaiting the day when I become desensitized to it all (or just give up and grow horns).  I acknowledge again that Mormons make a tempting target.  The policies of apparent discrimination makes it so; but seriously, The Book of Mormon Musical?  (And I have it on good authority that it contains catchy tunes, colorful sets, and profanity throughout.)  Of course, the South Park guys are equal-opportunity offenders, and Mitt Romney's campaign can't be blamed for The Book of Mormon Musical, only thanked.  But it feels a little bit much right now.

A couple of media storms have arisen in the past few weeks that illustrate my point; these concern baptisms for the dead, and the ban on blacks receiving the priesthood.

Baptisms for the dead have continued to be a problem in the Church due to the continued overzealousness of some genealogically-minded Latter-day Saints that feel inclined to submit the names of people such as of Anne Frank, Daniel Pearl, Elie Wiesel's parents and other Holocaust victims for proxy baptisms.  See my previous post.  And before I even heard the Church leaders' letter that was to be read in Sacrament meetings today, I first heard a report about it on NPR.

And then my former mission president (and BYU professor), Randy Bott, offered an explanation to a Washington Post reporter about the Church's ban on blacks receiving the priesthood 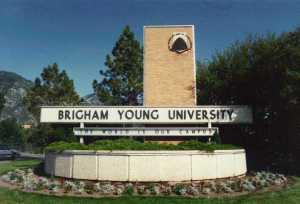 .  The Church immediately condemned it in an issued statement.  Well, I don't feel I need to say much about the ban or the 1978 reversal; here is the link to the original Washington Post article, and this is the Church's response as reported in the Deseret News and the Salt Lake Tribune.  Additionally, some Mormon bloggers at By Common Consent have already thoroughly examined the issue and posted their many comments, condemnations, and analyses on their website; they lined up like members of a Utah firing squad, uncertain who had the real bullet in their barrel, but took aim President Bott and fired their guns anyway.  Their posts can be found here and here and here and here and here and here.  I especially liked what this guy had to say  - he's southern, and I can relate.

But my point is that a lot of this news coverage seems to miss who we really are as Latter-day Saints.  For example, I enjoy explaining proxy baptisms for the dead.  To me, this rite and all the research that goes into it, shows a deep compassion for one's ancestors and a commitment to them in a real tangible way.  I am reminded of some branches of Buddhist practice that call for the male relatives of a deceased person to become monks and spend time in the monastery so that they can obtain merit vicariously for the departed.  This merit is then transferred in a ceremony in hopes that it will improve the station of the loved one in their next life.   Therefore, I realize I could take the opportunity to correct the misperceptions, but with so much information on the Church and its doctrines suddently available, why would someone even feel the need to ask a Mormon for clarifications at this point? (And why would someone feel the need to talk to LDS missionaries if they just heard them singing on Broadway for three hours?)

Additionally, all of the criticism of President Bott does not represent him in the way that I experienced him as a mission leader.  I love this man; I loved his enthusiasm, compassion, and insight.  He did away with "junior-senior companions," (we needed to learn to share responsibilities equally); he never talked about baptismal statistics, (this obscured the real purpose of missionary service); and he consistently followed Joseph Smith's declaration, "I teach them correct principles and they govern themselves." As an instructor, he was incredible.  He gave us the parable of the devil tree, his retelling of the David and Goliath story, and a clearer existential understanding of life and death.  I remember going to him as a struggling "green" missionary, feeling somewhat alone and isolated, and he saw to the heart of my concerns almost instantly.  His counsel was right on the mark, and I remember it almost word for word.  I don't feel I should forget this, regardless of the Post article and the assertion by some that President Bott has taught these ideas for years at BYU.

Thus, I refuse to define my former mission president by this public relations debacle.  I know that I don't wish for a lone action on my part to solely characterize me.  President Bott does not equal his statement made to the Post reporter, just like the Church is not just the pre-1978 ban on blacks receiving the priesthood.  But I realize that this happens often in life and popular media; we define people by their most provocative action or a prominent occurrence, and all else becomes insignificant: Kitty Genovese was defined by her murder, Richard Jewell by doing his job, and Thomas B. Marsh by cream off the top of the milk.

I miss the days of my youth in the south when nobody really knew the Mormons; I could be the one to tell them who we are and be the first point of contact.  Then I had control of how I was defined and understood.  So let it be over quickly.  Mitt Romney's presidential aspirations have pulled Mormonism into the 21st-century spotlight like a handcart across the plains of America, and I am feeling pretty tired.  Not even a hit Broadway musical could have ever done it this well.
Baptism for the Dead Contributors featured mormons News Links Priesthood Ban
Do you like this post?
Tweet