A great example of our nation’s partisan politics is the careless discussion of the Supplemental Nutrition Assistance Program (SNAP) or food stamps. Lately there have been several measures passed by the House of Representatives which feed on misinformation or play upon voter’s perceptions. As citizens we are left to dissect rampant talking points and blatant fabrications with little help from our media outlets. In general, misinformation has become a lucrative industry with talk show hosts, pundits, and politicians selling unsubstantiated data and twisted logic.  This leads to conversations driven by 45 second sound bites, 140 character tweets, and out-of-context statements which are shallow and divisive. 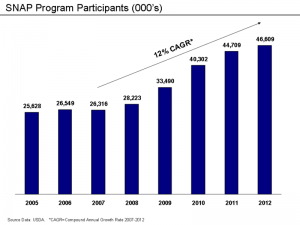 SNAP has expanded rapidly under the Obama administration making it a popular talking point with right-wing pundits.  The guilty-by-association rhetoric leaves out critical information needed to understand the trends, and focuses entirely on the “what” and not the “why”.  Republicans are correct to point out food stamp participants have grown 65 percent since 2008 increasing spending to an all time high of $74B (2 percent of budget), but when asked the cause they fall into the trap of popular propaganda.  They do not know that 50 percent of food stamp recipients are under the age of 18, or 15 percent are elderly. They do not understand that 20 percent of food stamp households support the disabled. They incorrectly believe that President Obama has passed legislation that enables the expansion of the program or incentivizes participation.

In addition, Republican's association of food stamps with left-leaning blue states lacks credible data.  The highest SNAP participating state is Mississippi with 22.5 percent of their residents receiving assistance.  7 of the 10 highest SNAP participating states are red and primarily in the South. The state with the most people on food stamps is Texas, which is surprising given California has 12 million more residents.  Even the reddest of states, Utah, has seen participation double in the last five years (from 5 percent to 10 percent).  Regardless of state targeted data, food stamps are distributed somewhat evenly. Currently 16.8 percent of red state residents are receiving food stamps compared with 14.3 percent of blue state residents. 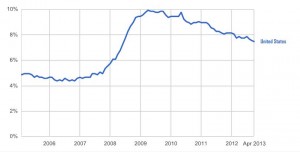 It is not fair or reasonable to hold the Obama Administration accountable for SNAP participation increases.  It is fair to hold the Obama Administration accountable for households leaving the program now that unemployment is improving (7.8 percent).  Moving people off of government assistance is a sign of progress and should be the desire of every Democrat who understands the bridging role of social programs. However, decreasing participation needs to be persuaded, not forced, as any mandated cut in SNAP will disproportionately impact the elderly, disabled, and children.

Food stamp talking points, like all issues, need to be challenged and understood.  Focusing too quickly on the “what” will lead us into a partisan spin zone and dull our problem solving ability.  We need to ask the right questions, understand the impact of our choices, and weigh the impact to our fellow citizens. Accepting popular talking points to support an ideology is not only disingenuous, but undermines the need for solution-oriented conversations to tackle our country’s major challenges.