Nothing is left unscathed.

As this chart from the Intergovernmental Panel on Climate Change's (IPCC's) March 2014 working group report shows, climate change will hit everything from the polar ice caps to our bank accounts.
The colorful icons show what kinds of effects have been observed so far around the world, and the little bars next to the icons show how much confidence scientists have that the effects were caused by climate change. In the Arctic and other parts of North America, for example, scientists have high confidence that glaciers, snow, ice, and permafrost are melting due to global warming.
But warming doesn't just impact weather: It changes the environments in which we grow our foods, changes the ecosystems in which the fish we eat live, increases the likelihood of wildfire, erodes the coastlines, and causes drought that robs populations of their water sources. 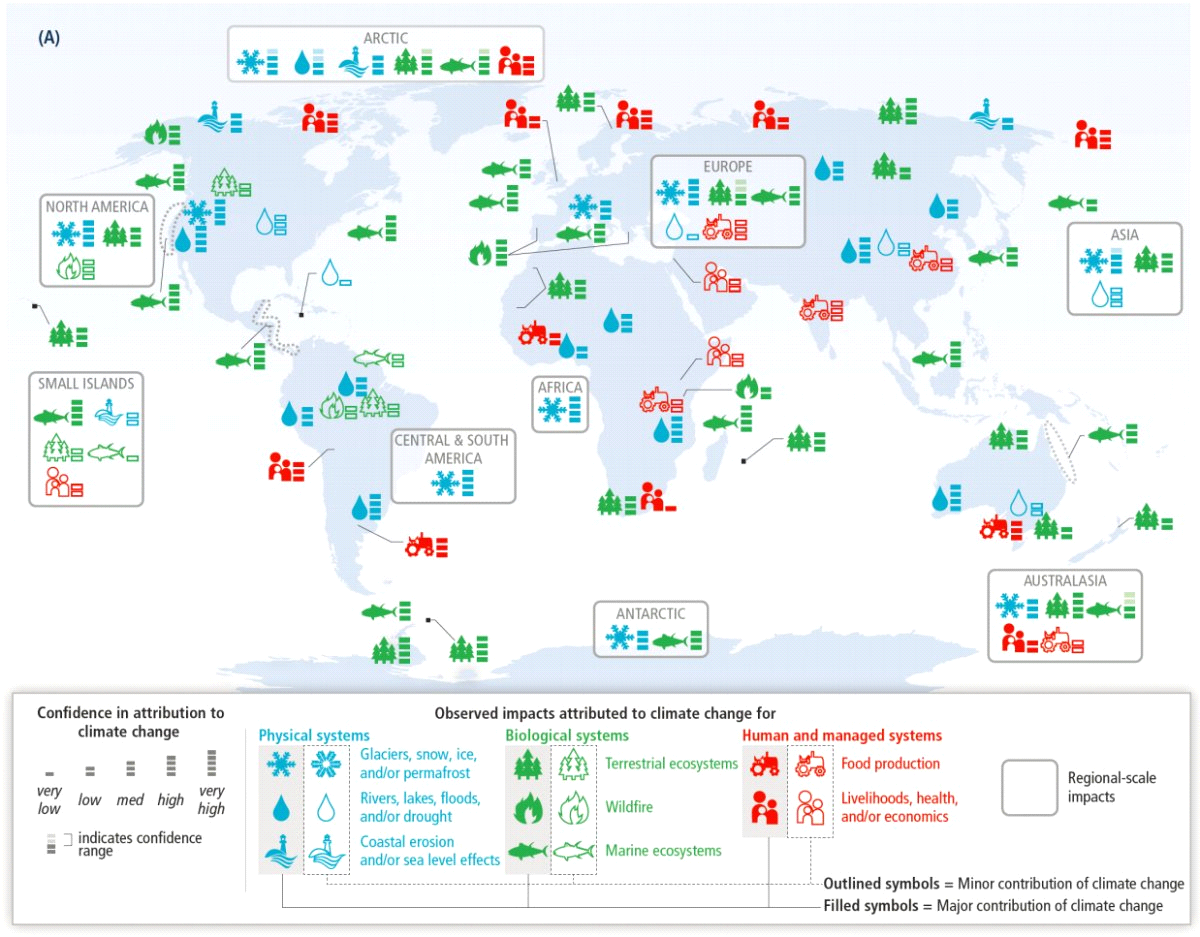 Coastal cities will be wiped out.

All over the world, coastal cities are in danger of being wiped out by floods. This chart, published by the Union of Concerned Scientists, focuses just on the United States, pointing out some of the country's historic landmarks that may be lost to rising sea levels or other extreme weather events.
The Statue of Liberty, Cape Hatteras lighthouse, and the Kennedy Space Center are just a few places that may one day exist only in history books. 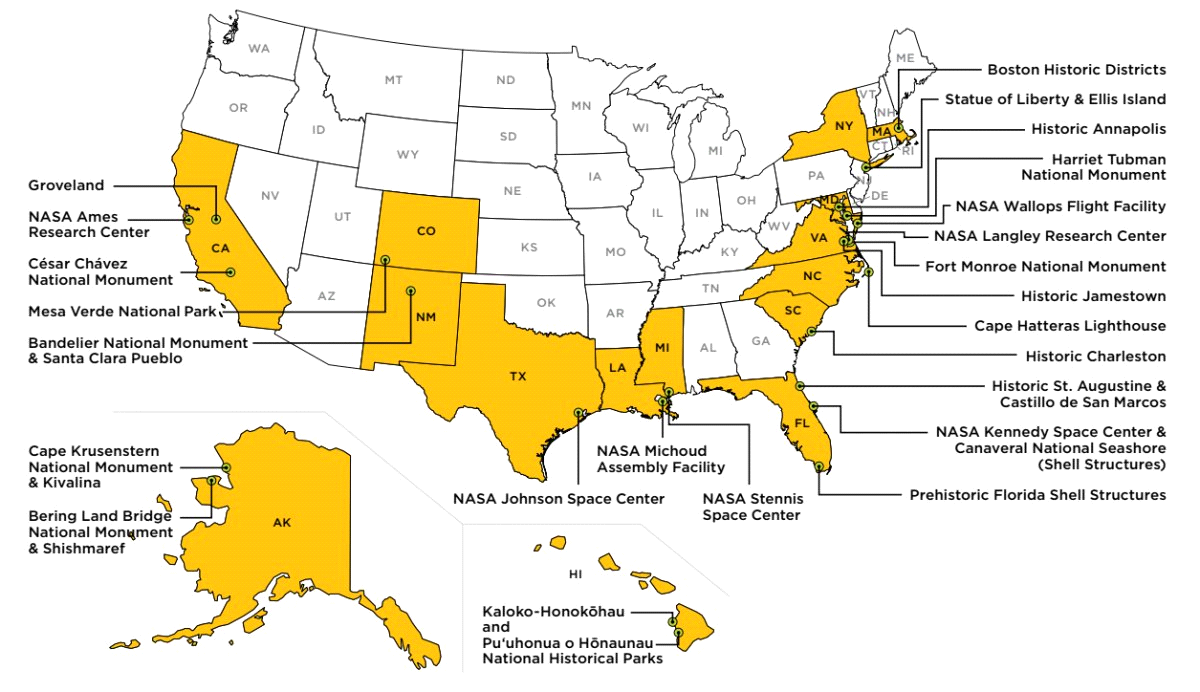 The increasingly acidic ocean will kill its inhabitants.

As the ocean absorbs more carbon dioxide, chemical reactions cause the water's pH to fall. This chart from a recent World Meteorological Organization report shows the ocean's pH over the past 20 years, according to a number of different studies (shown in different colors). The numbers are slightly different for each model, but all show a downward trend in ocean pH. 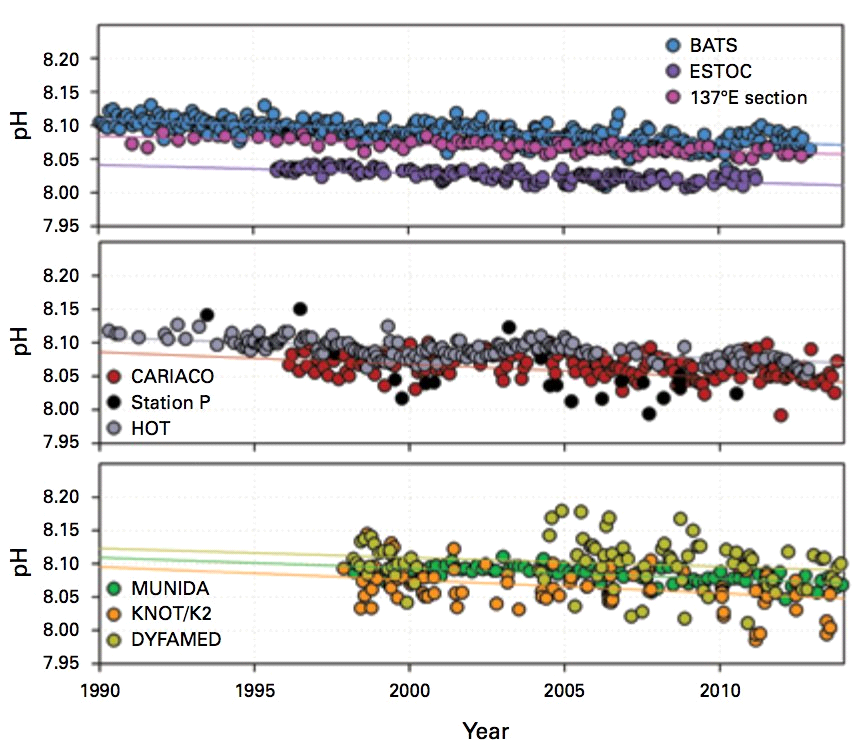 An acidifying ocean could spell the demise of all kinds of sea life that are not equipped to thrive under such acidic conditions, and can't adapt and evolve quick enough.
This IPCC chart shows how four kinds of animals are being affected by ocean acidification. As you move from left to right on each graph at the bottom of the chart, pH decreases and the animals experience more negative effects. Acidification is especially harmful to animals like mollusks and corals, which use calcium carbonate to protect their bodies.
As pH drops, so do the levels of the molecules these animals use to produce and maintain their calcium carbonate shells. 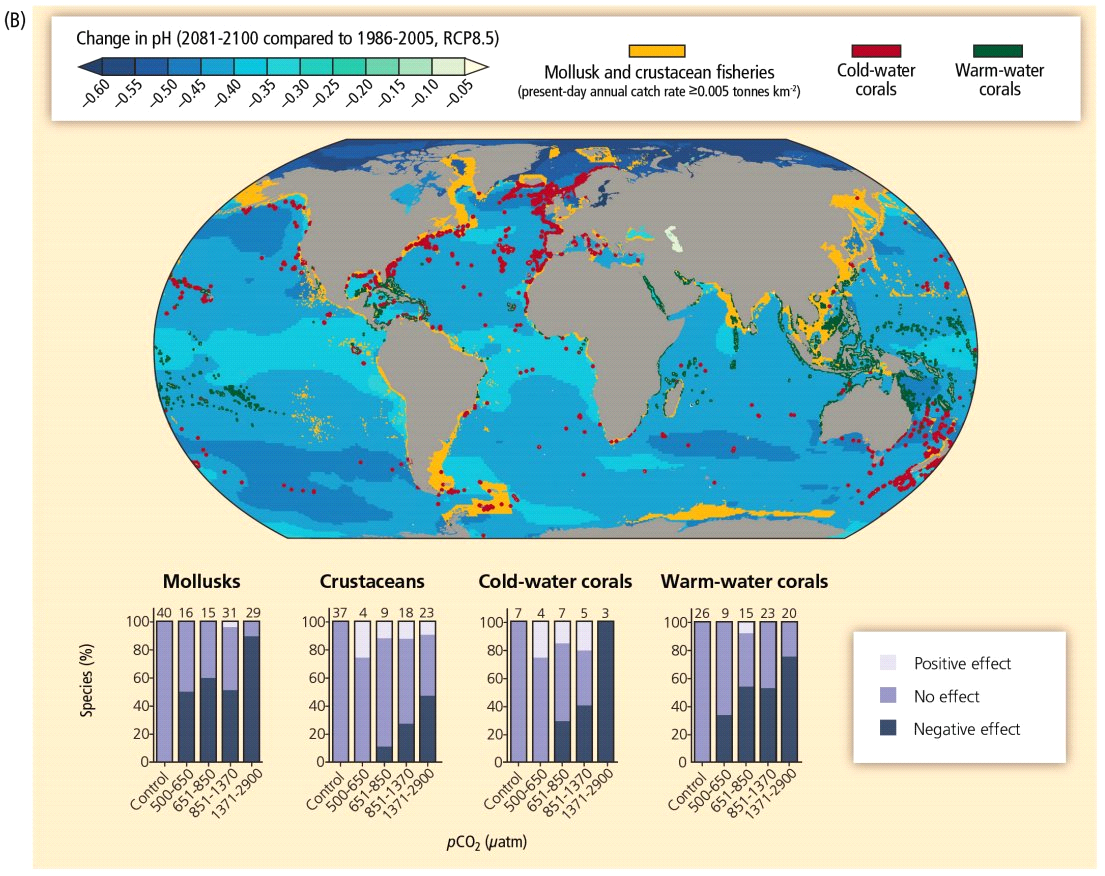 Melting permafrost will pour more carbon into the atmosphere.

As temperatures rise, permafrost — a layer of permanently frozen soil found in polar regions — will start to melt. When this happen, the ground can become softer or change shape, which can damage buildings and cause trees to lean or topple over.
Permafrost also contains trapped carbon, which is released into the atmosphere as it melts. This chart from IPCC's Fifth Assessment, released last year, shows several projections (shown in different colors) on how permafrost's surface area might decrease throughout the rest of the century. They all show a downward trend.
Currently, permafrost has an area between 12 and 17 million square kilometers. In this chart, the worst-case scenario projects permafrost shrinking down to 2 million square kilometers or less by 2100. 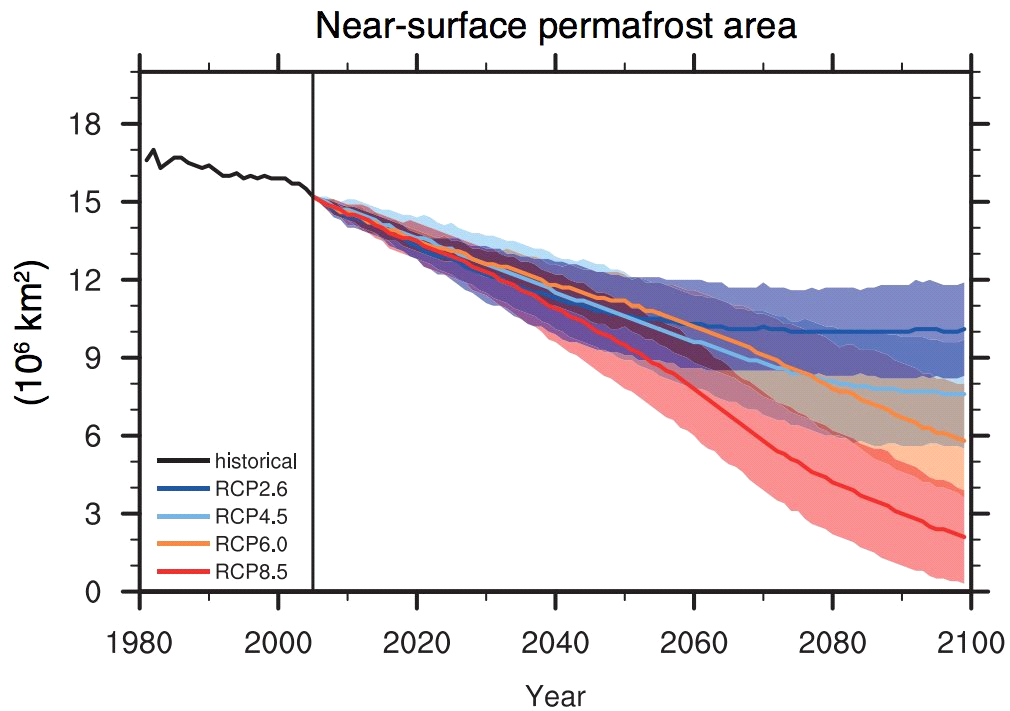 Another side effect of rising temperatures is melting ice. Numerous studies have shown that ice in the Earth's polar regions is melting, and models show it will continue to do so.
The IPCC Fifth Assessment chart below shows different projections (shown by the different lines on the graph) on how Arctic sea ice area is expected to decrease throughout the century, using September — the month in which the most Arctic sea ice has melted each year before refreezing over the winter — as an example. Some of these models predict a totally ice-free September by 2050. 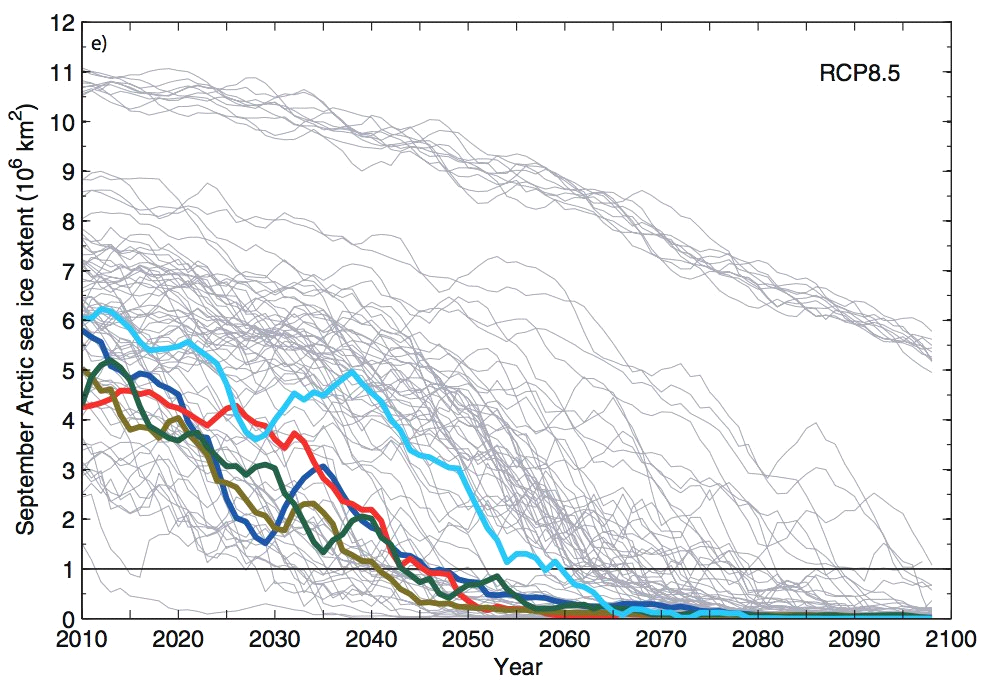 Less sea ice means less habitat for animals like polar bears, who depend on it for survival, and it also means more water will be melting into the ocean, leading to the next problem on this list.

As sea ice continues to melt, all that excess water will cause sea levels to rise. This spells disaster for coastal areas, which will inevitably flood as the water level creeps up.
This IPCC Fifth Assessment chart shows how much sea level rise scientists expect will be caused by a variety of different factors, including the melting of large ice chunks like the Greenland and Antarctic ice sheets. The chart also factors in thermal expansion — water's tendency to increase in volume as it gets warmer.
The gray section on the chart shows how much sea levels will rise when all of these factors are lumped together. This projection shows sea levels rising by nearly half a meter (that's 1.5 feet) or more by 2100. 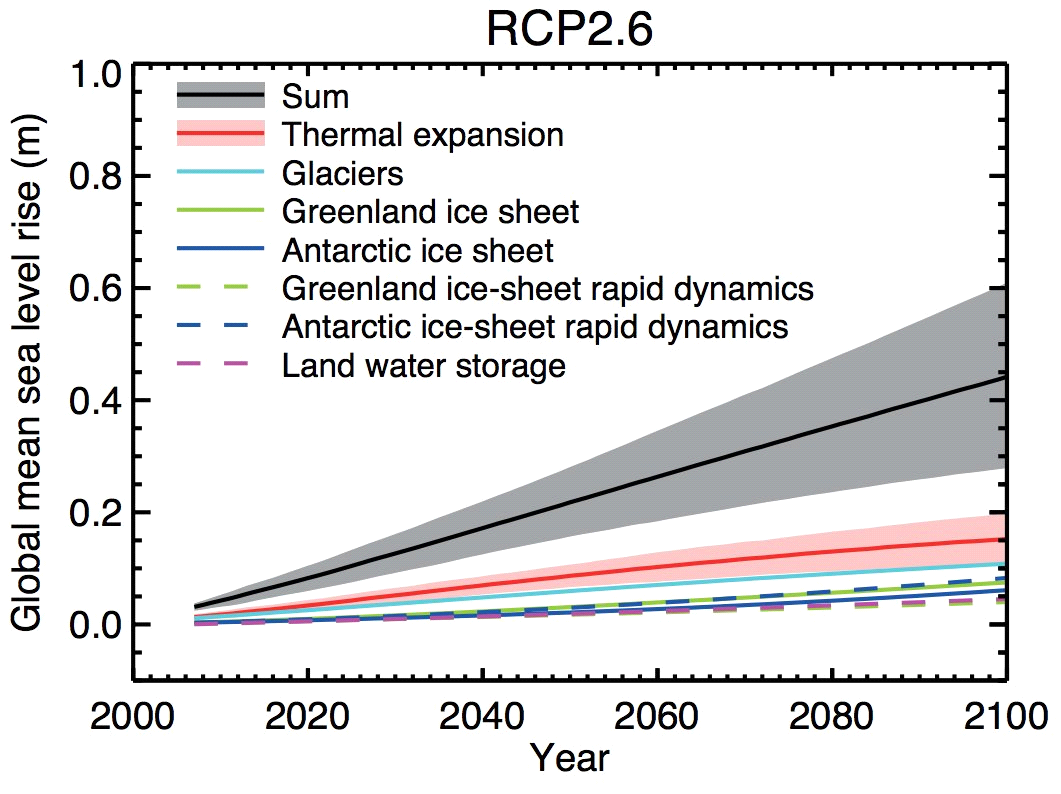 There isn't just one solution.

Just about every aspect of life contributes to carbon emissions. This chart from the U.S. Environmental Protection Agency shows carbon emissions by sector in the United States – the second largest contributor to global carbon emissions. Surpassed only by China, the US pumps the most carbon into the air through the electricity sector, which is followed closely by the transportation sector. 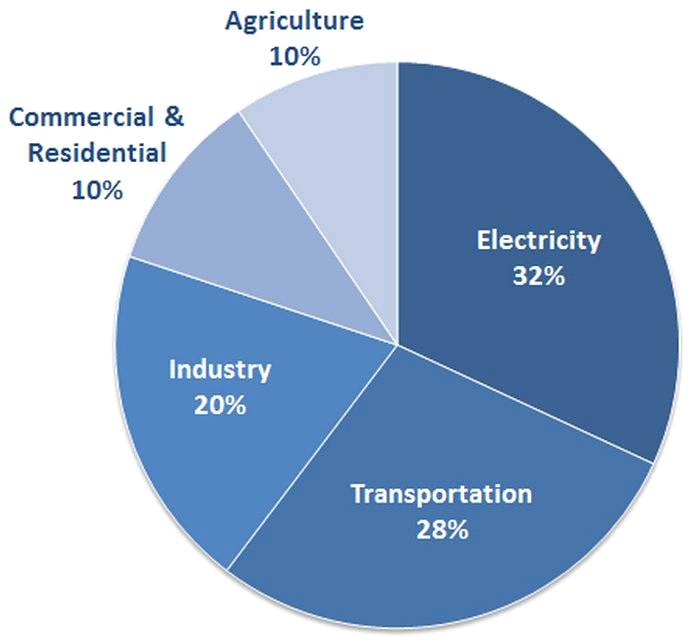 It's happening faster than you know.

Climate change is caused by carbon emissions in the atmosphere, and humans are pumping out carbon at an unprecedented rate.
Carbon dioxide levels in the atmosphere increased at a record-breaking pace last year, new report shows, with the biggest jump in atmospheric CO2 since scientists first started collecting detailed records in the 1980s.
This chart from the World Meteorological Organization's report& shows how much carbon dioxide emissions have risen each year — the increase from 2012 to 2013 comes in at a whopping 2.9 parts per million of carbon dioxide added in just one year. 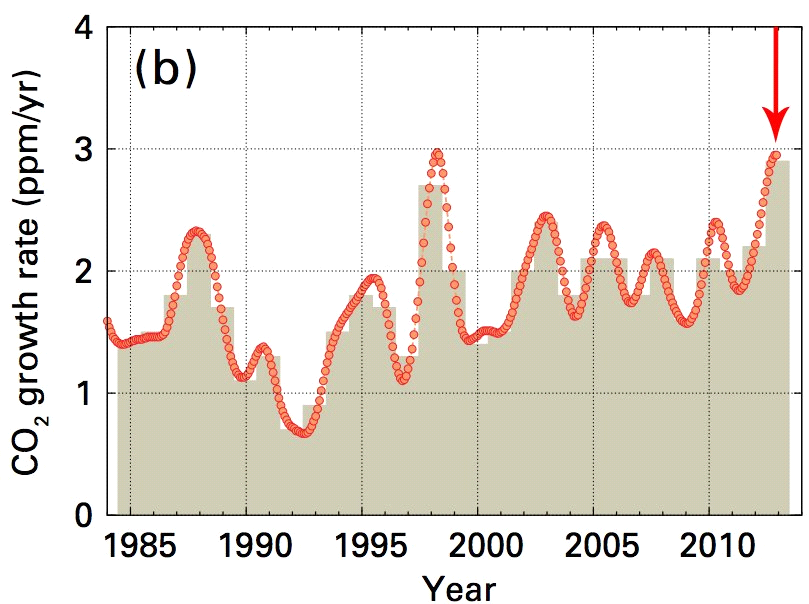 And we're running out of time.

Most scientists agree that keeping global temperatures within 2 degrees Celsius of their historic levels is our last chance to avoid the most extreme effects of climate change — any warmer, and the earth could launch into a spiral of terrible storms, droughts, fire, famines, and extinctions.
Keeping under 2 degrees was the goal agreed to at the 2009 United Nations Framework Convention on Climate Change, but recent research shows we're on track to miss the mark within just a few decades.
This chart, which is part of a report released this month by accounting giant PricewaterhouseCoopers, shows just how far off we are. It illustrates current rates of "decarbonization" — essentially reducing our use of carbon — compared with the rates needed to keep climate change in check.
At the rate we're going, we're on track to shatter our goal by a hefty 2 C by the end of the century (reaching a total of 4 degrees Celsius increase). In order to avoid such an outcome, we'd have to cut 6.2 percent of our emissions every year for the rest of the century — a monumental task. 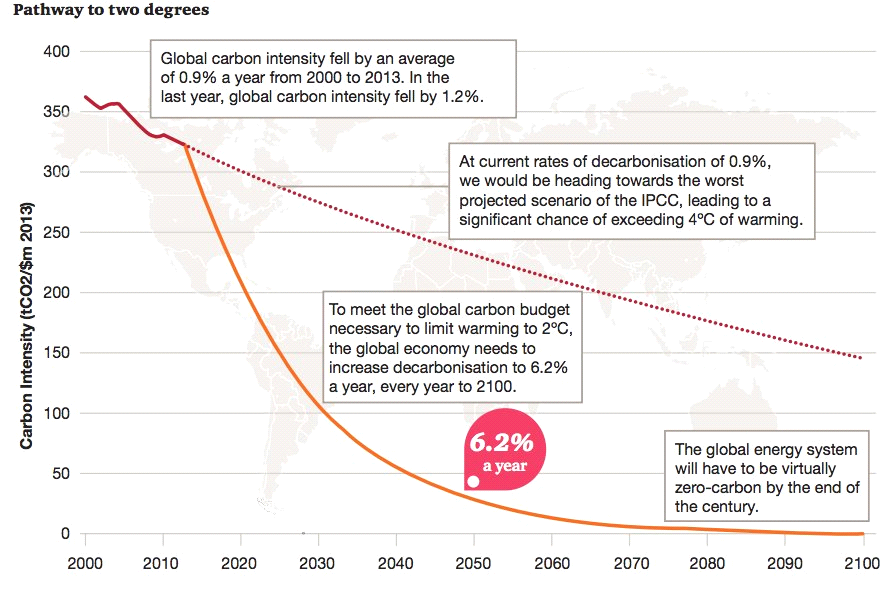 We know that the world will be destroyed. But what God allows for the end to come via calamaties that we could have prevented?
Deniers of climate change perhaps wouldn't care even if they changed their mind because the end of the world is prophecied anyway. Yes, God has that in mind. But God also wants us to be stewards of the earth. And even more importantly, temporal salvation is a thing, too.