Nothing like the back-and-forth, finger-pointing, and grand-standing bluster of John Boehner to throw water on any lingering post-election celebratory feeling.  Yes, the congressional Republicans are the ultimate buzz-kill.  And of course, once again, President Obama is proving himself perfectly diplomatic in the fiscal cliff negotiations.  He is even doing campaign stops, which makes me suprisingly nostalgic for two months ago when the idea of moving forward seemed much more of a possiblity than it does right now.  Also, the President is proposing real compromise (cuts in spending in addition to raising rates on the wealthiest of Americans) while the Republicans are offering a vague proposal to close tax loopholes as a way to generate revenue from the upper 2% and to cut spending on who-knows-what.

A large majority of Americans agree with President Obama's balanced approach to dealing with the fiscal cliff.  In fact, according to Kwame Holman from the PBS Newshour:

...new polls show Americans do want compromise, and it's the Democrats who hold the edge. An NBC/Wall Street Journal poll released yesterday shows a majority, 65 percent, say President Obama has a mandate on both increasing taxes on the wealthy and reducing federal spending.

A similar two-thirds are willing to accept tax increases or cuts in federal government programs to reach a deal. But while public support on taxes is overwhelming, opinion on proposed cuts is less so.

So according to these numbers, even Americans who may not have supported President Obama for reelection acknowledge that his balanced approach to looming fiscal cliff is the way to go.  Presently, Obama's approval rating is at 55%, while the Republicans stand at a 32% approval rating.  See the full report from the PBS Newshour's coverage for more complete "notes" of the going-ons of this debate.

But what does this say about the Republican's digging-their-heels approach to dealing with President Obama's agenda?  Apparently, the Republicans view this as their means of getting what they want, while America sees it as more of the same.  However, President Obama clearly has the upper hand.  The Republicans run the risk of being the party that denied tax cuts to the majority of Americans in order to preserve tax breaks for the wealthy.  And seriously, is $250,000 really the defining cut-off for the middle class?  Many would disagree and believe that Obama's proposal of going back to the pre-Bush tax rates are not enough.  According to Chris Weigant, "If we're going to tax the rich... then let's tax the rich."  See his recommendations on Huffington Post.com.

So hope and change are once again side-stepped by Boehner's need to hold a daily press conference where he says the same thing over and over again with his gravely voice and his blunt affect: "It's clear the president is just not serious about cutting spending!"  Meanwhile, America's economy is inching closer and closer to the edge of some cliff.  (Probably in the Arizona desert somewhere.)  Which causes me to think: while I hope we are spared a Thelma-and-Louise-type ending in 2012, (although there are a few things/people/Boehner I would like to see driven over a cliff,) maybe this is the end the Mayans where predicting?  In lieu of that meteorite colliding with the earth, we get a tumble off of a fiscal cliff instead.  This might be the time we should call our members of congress.

See this inforgraphic from DailyKos.com for more insight into the so-called fiscal cliff. 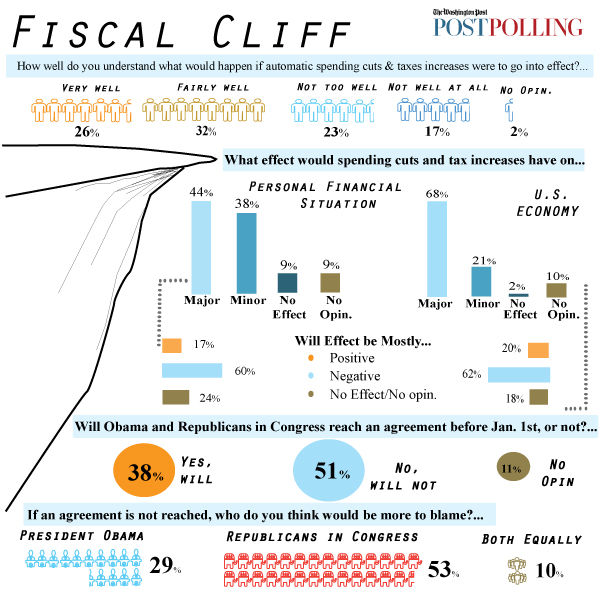