The Book of Mormon Takes a Stand - for Obama 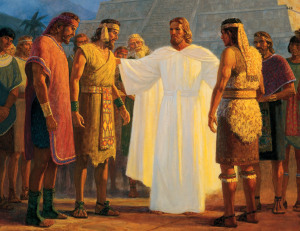 We all know Mitt Romney is the Mormon in this year’s presidential race.  Therefore, we ought to be safe in assuming that Book of Mormon teachings more closely align with his views than those of President Obama.

Alas, if we made that assumption, we’d be wrong.

Let’s examine what the book says and where the candidates stand.

When it comes to the Book of Mormon’s central message—that Jesus Christ is the Son of God and Redeemer of the world—Obama, a member of the United Church of Christ, and Romney, who belongs to The Church of Jesus Christ of Latter-day Saints, agree.

On other key topics, however, they part ways.

For example, the book prominently features wars and other conflicts.  The subject occupies around 170 of the book’s 531 pages.  Prophets often admonish Book of Mormon peoples never to “go up” to war against their enemies. Instead, they must wait until their foes “come down” to their land.  In other words, they may fight defensive wars but must never be aggressors.  As LDS scholar Hugh Nibley wrote, righteous principles “rendered aggressive warfare impossible and preventive warfare utterly unthinkable.”

In the Iraq War, we saw the United States “go up” to attack a nation that hadn’t attacked us.  Supporters of the war deemed it preventive or preemptive.  Romney strongly supported the war, favored increased U.S. troop levels as it dragged on and criticized Obama’s decision to end it.  Obama, on the other hand, opposed the war from the start. As president, he terminated U.S. troop involvement in December 2011.

The Book of Mormon also declares that righteous nations must treat prisoners of war humanely.  In Alma 62:27-29, prisoners not only were freed, they were given land and were welcomed into the society.  On another occasion, prisoners were allowed to depart promptly in peace after a bloody battle (Hel. 1:33). Centuries later, however, after both sides had rejected God, they abused and tortured their prisoners (Moroni 9:7-10).

In the wars in Iraq and Afghanistan and in the war on terror, U.S. soldiers and our agents have engaged in a variety of abuses and torture of prisoners, including waterboarding. Among the most infamous sites of prisoner abuse has been Guantanamo.

Romney declines to renounce waterboarding, and his aides have said that he does not view it as torture. His support of “enhanced interrogation techniques” has drawn strong criticism from 2008 Republican presidential candidate John McCain.  Romney also has said, “Some people say we should close Guantanamo.  My view is we ought to double Guantanamo.”

Shortly after taking office, President Obama issued an executive order halting harsh interrogation techniques, including waterboarding. He has sought to close Guantanamo but has faced stiff resistance from Congress.

In terms of military spending, Nibley assures us that when the Nephites were righteous, their “military preparations were defensive—minimal—with God acting as their radar and warning system.”  Rather than “minimal” defense spending, Romney wants to restore American power and has pledged to boost the military budget by close to $2 trillion over the next 10 years, adding 100,000 soldiers.  (U.S. military spending is by far the world’s largest.)  Obama favors significant cuts to the military budget.

Clearly, it is Obama, not Romney, who heeds the counsel of Book of Mormon prophets on war. His actions prove that he regards Christ as the Prince of Peace rather than the Prince of Preemptive War.

Another yardstick measuring the uprightness of Book of Mormon peoples is how they treat the poor.

During the longest peaceful era in Book of Mormon history, the people established economic equality—“they had all things common among them; therefore there were not rich and poor” (4 Nephi 1:3). Earlier, a prophet rebuked those who neglected the poor and who allowed great disparities to develop between the haves and the have-nots (Alma 4:11-13). The practice of “oppressing” wage earners was condemned (3 Nephi 24:5).

The Book of Mormon stresses equity.  In Mosiah 18:27 we read that those with high incomes should give “more abundantly” and that for those with little, “little should be required” and “to him that had not should be given.” King Benjamin reminds his people that he has only sought to serve them “and have not sought gold nor silver nor any manner of riches of you.” Prophets denounced taxation that enriched the wealthy and those in power while burdening everyone else (Mosiah 11:3-6; Ether 10:5,6).

Romney deserves credit for leadership at Bain Capital that rescued some companies that might otherwise have gone out of business. But his actions widened the gap between the haves and have-nots, with people like himself and others at the top reaping multiple millions in income while many at the bottom lost jobs and saw jobs shipped overseas where it is legal to oppress wage earners by paying them below minimum U.S. wages. Romney favored a minimum-wage hike early in 2012 but then reversed his position. His proposed boost in the military budget would come at the expense of social programs that aid the needy. President Obama has supported hikes in the minimum wage and is often called a socialist for supporting programs that help lower-income and unemployed Americans.

Although both candidates can be viewed as wealthy, Romney’s 2010 tax forms, the latest he has released, show income of $21.7 million, 13 times greater than Obama’s $1.7 million.  But Romney paid federal taxes of only 13.9 percent while Obama’s federal tax rate was 26 percent. In order to reduce the gap between the haves and have-nots and help cut the deficit, Obama favors allowing the tax cut for people making more than $250,000 annually to expire. Romney would extend the tax cut for the wealthy, making it easier for high-income Americans to continue paying lower overall rates than those of modest income.

Another prominent Book of Mormon message is to beware of pride while remembering “your own nothingness . . . and humble yourselves, even in the depths of humility” (Mosiah 4:11). Prophets rebuke those who feel they deserve their riches and who claim “every man prospered according to his genius” (Alma 30:17).  Part of this pride among the Nephites also manifested itself in feelings of national superiority and boastfulness after military victories.

In his 2010 book “No Apology,” Romney lays out the case for American greatness. He vows to “never again apologize for America.” He has reminded critics of his income that America's capitalistic system allows some to accumulate great wealth (“I’ve been extraordinarily successful”) and that those who are less successful should avoid “the politics of envy.” President Obama has apologized for American mistakes that have offended other countries, such as the burning of a Koran at a U.S. military base.  He has stated that no one achieves success alone but instead receives help every step of the way.

On immigration, the Book of Mormon offers a limited “open door” policy. If people are willing to be good citizens, the attitude is “y’all come.” For example, when believers among the Zoramites found themselves expelled from their country, they entered the land of Jershon. The people of Jershon, being righteous, did not say, “You don’t have proper papers, so self-deport yourselves back to where you came from.” Instead, Jershon “did receive all the poor of the Zoramites that came over unto them; and they did nourish them, and did clothe them, and did give unto them lands for their inheritance” (Alma 35:9).

Mitt Romney coined the phrase “self-deport” in saying those who lack citizenship papers should leave the country.  He has opposed the DREAM Act, which provides a pathway to citizenship for those brought to the United States as children. He also supports making English the country’s official language and has said Arizona and other states should be allowed to enact their own immigration laws.  Obama halted deportation of young undocumented immigrants in June 2012 and supports the DREAM Act. He also directed the Justice Department to pursue its successful challenge of Arizona’s “show me your papers” anti-immigration law.

With Mitt Romney’s positions so often contrary to the Book of Mormon, what shall we say to Mormons who support him? Perhaps a one-word answer is best. It’s a word that repeatedly pops up in the Book of Mormon: Repent!
Book of Mormon featured Guest Contributors immigration Obama poverty Romney
Do you like this post?
Tweet