The Rich Take the Truth to Be Hard 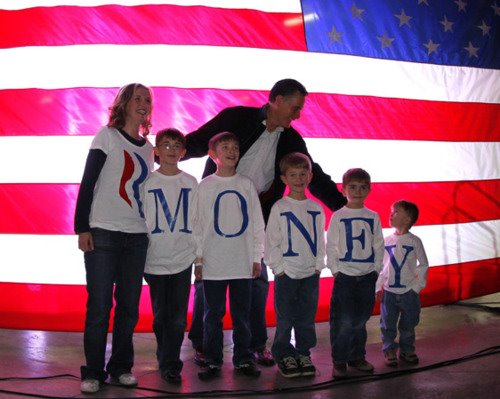 President Obama finally did it: he ended Tuesday evening's debate by calling out Governor Romney (to his face!) over the 47% comment.  Romney set himself up for it; he answered the last question by declaring that he cares about 100% of America.  This proved a temptation too great to for even Obama to resist, and Obama responded by referencing the behind-closed-doors 47% comment.

But on one point, Romney is correct: the Obama campaign has painted a picture of Romney as out of touch with the poor and the middle-class.  But Romney has also done a lot of this to himself; when he attempts to be candid, he invariable says too much, and this ultimately signals open season on the fields of (class?) warfare.  Romney's wealth, elitism, and disconnect from ordinary Americans have become his most salient features, and therefore this image of privilege has supplanted the real man.

And it seems that conservatives are getting rather testy about all this negative talk of Governor Romney's wealth - and also of rich people in general.  This also is the case with some members of the church as well, and I'm not sure when the shift began; it used to be that we were concerned about not speaking ill of the poor, but now the super-wealthy seem to be deserving of our charity and sympathetic glances.

Two examples: some months back, our Elder's Quorum lesson devolved into the semi-annual discussion of how should we respond to "pan-handlers" on the street; one comment from the group asserted that we should be cautious because homeless people are often hyped-up on meth and might kill you.  And then the next Sunday, another good brother commented on how there's such hostility towards wealthy individuals these days, and that he was surprised by the poor opinions that many people have of the rich.  (Yes, he used "poor" and "rich" in the same sentence as if to say, "those poor rich people.")

In an extreme case of political-correctness-hijacking, the wealthy are no longer referred to as "the rich," but now they are part of the protected class of  "job creators," "entrepreneurs," and "innovators."  I'm guessing that congress might even enact laws shielding them from hate crimes.  This is necessary because all of them own small businesses and hire lots of people to do lots of things; money trickles down from these wealthy folks like water flowing towards a floor drain after a long shower at the gym.

In a recent column, David Brooks extolled the virtues of a wonderfully ambitious job creator, Elon Musk, one of the minds behind PayPal.  He writes, "Government can influence growth, but it's people like Musk who create it...A few ridiculously ambitious people can change an economy more than any president."  Romney reiterated this when he reverted to his high school cheerleading days and attempted to lead a chant towards the end of Tuesday's debate, "Government does not create jobs! Government does not create jobs!"

So if David Brooks is correct, we shouldn't be looking to tear down Romney and his financial success - even if he did eliminate jobs in order to make companies profitable and more efficient.  The goal of a business is to make money; when a company makes money, its workers will benefit - the company can hire more workers. (Wait, is that what Romney meant when he said 'corporations are people?')

So this just begs the question: why all of this class warfare anyway?  and when did this feeling of animosity towards the wealthy begin? and who decided that it was okay to criticize someone just because of their riches?

Or Matthew 6:24: "No man can serve two masters: for either he will hate the one, and love the other; or else he will hold to the one, and despise the other. Ye cannot serve God and Mammon."

"Go to now, ye rich men, weep and howl for your miseries that shall come upon you Your riches are corrupted, and your garments are motheaten. Your gold and silver is cankered; and the rust of them shall be a witness against you, and shall eat your flesh as it were fire. Ye have heaped treasure together for the last days (James 5:1-3)."

The Book of Mormon is also rife with admonitions as well; I'll just give the first one I found:

"Wo unto the rich, who are rich as to the things of the world.  For because they are rich they despise the poor, and they persecute the meek, and their hearts are set upon their treasures; wherefore , their treasure is their god. And behold, their treasure shall perish with them also (2 Nephi 9:30)."

So I guess when people ask where all this rich-bashing came from, I'll just say, "well, it's Biblical."

Of course, being "rich" is relative; with the advent of the middle class, most people would not think of themselves as "rich," but might feel like they're somewhere in the middle. 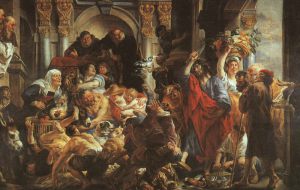 However, I wonder what wealth looked like during the time of Christ, a time when money changers were cast from the temple?  And for the young man who received Jesus' condemnation, what made him rich?  We are told that he had "great possessions," (but so do many of us, and we are clearly in the middle class.)

These questions are particularly hard for many of the super rich, who tend to view their "great possessions" with a sense of pride.  Chrystia Freeland, the author of Plutocrat: the Rise of the New Global Super Rich and the Downfall of Everyone Else, said on NPR on Monday that "in America we have equated personal business success with public virtue. And to a certain extent, your moral and civic virtue could be measured by the size of your bank account."

Freeland goes on to say that the "super rich" are angry because President Obama is pushing the idea that "what is good for the guys at the very top is not necessarily good for the people in the middle."  They see this as an "existential threat,"  because people don't just want to be wealthy and successful, they want to be good.  Therefore, any suggestion from progressive thinkers, Obama, or Jesus to the contrary is met with disappointment: "Wow, I'm not as full of virtue and goodness as I thought I was?"

Freeland notes that the numbers of  plutocrats has increased, and the gap between them and everyone else is huge; ultimately, they can be expected to "rig the rules in their own favor," while convincing themselves that what is good for them is in the interest of everybody else, (i.e., cut entitlements and shrink the national debt, while reducing taxes for the wealthy.)

However, I am not interested in pointing fingers at Romney - or to imply that any church members with several fancy cars and a horse are not going to heaven until they learn to thread a needle.  I guess I am more interested in understanding America's relationship with money.  Capitalism has become our national pastime - and I am not sure what this says about us.  But alas, that is also another post.

I think our prophet Brigham Young's fears for the Church and the Saints is of particular note:

"The worst fear I have about this people is that they will get rich in this country, forget God and His people, wax fat, and kick themselves out of the Church and go to hell. This people will stand mobbing, robbing, poverty, and all manner of persecution and be true. But my greatest fear is that they cannot stand wealth; and yet they have to be tried with riches, for they will become the richest people on this earth."

What did President Young see of our future when he said this?  The implications for America (or even for me and my own life) will make my head hurt if I think on it too long.  Clearly this is a truth that is hard for all of us (including the rich) to take in.  The pursuit of wealth is truly a moral conundrum; for what is so powerfully connected with self-worth in the American context is defined as a burden that drags one to hell in the scriptural sphere.

So I will end this for now.  I have the new episode of The Walking Dead saved on my DVR, and I am really excited to watch it on my 48-inch flat-screen LED TV with my Bose speakers!  (And my TV is a Samsung, because everyone knows that is the brand second to none when it comes to flat-screens!)
Bible Book of Mormon Class Warfare Contributors featured Obama Romney Wealth
Do you like this post?
Tweet