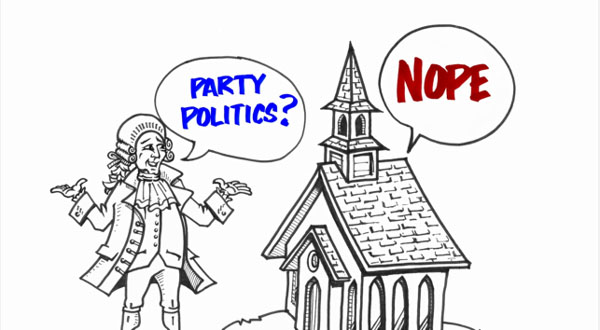 I just finished reading Stake President Matthew DeVisser's Talk [PDF] in a recent Stake Conference in Utah. I'm glad he said what he did. First of all, he's a good man just trying to do his best as he fulfills an incredibly difficult calling. I admire anyone who's willing to take on an entire Stake's-worth of responsibility in addition to work and family. Kudos to him for that. And I'd imagine he's feeling rather sheepish now that this speech has caused such a stir.

Peggy Fletcher Stack of the Salt Lake Tribune reports on how this talk came to be accessible outside President DeVisser's stake:

In the speech, DeVisser . . . said he did not intend to be controversial or political, but was directed in his thinking by the "Holy Ghost."

He later emailed a copy of the speech to a Mormon in his stake and, within days, it was being forwarded, posted and linked online. Soon it had gone viral on the Internet, appearing on more than 200 websites, blogs and Facebook pages, generating heated debates between believers on the political left and right.

It's important to note that this has already made rounds online, and there's a good reason for that: it taps into the feelings of a lot of Church members. We've posted before about our experience that many Mormons conflate religion and politics:

Whether about national, state, or local issues, these opinions come out over the pulpit, in the hallways between meetings, in Sunday School lessons, during Visiting Teaching visits, and really anywhere else Mormons tend to be. Now, if you’d ask most Mormons, they’d tell you that political opinions have no place in Church. The thing is, most conservative Mormons in the US honestly believe that their political opinions are actually religious ones. In other words, when a well-meaning Sister expounds upon the Satanic agency-reducing effects of redistributive taxation, she is not talking politics, she’s talking religion.

We here at mormonliberals beg to differ. We don’t accept conservative politics as automatically equalling the Gospel.

I'm glad he said what he did because let's be honest--a lot of the people in my ward and in your ward will agree with him. This makes explicit the implicit biases we experience every Sunday at Church. And now we can talk about them, if only in the context of this man's political pulpit opinings. And this is a conversation we need to have. I wrote on my personal blog last year about the experience of attending the inaugural LDSDems meeting in Charlotte, North Carolina during the Democratic National Convention. I'm not a Democrat by any stretch, but it was a profound experience I will never forget:

These were people who know what it’s like to be an ideological and political minority at Church every Sunday. People who are familiar with not only the overt attacks on progressive ideology from our fellow Mormons (I can’t tell you how many times I’ve been told political ideas I believe in come straight from the Devil himself), but also with the more subtle and regularly unacknowledged antagonisms. The overheard conversations between two fellow Latter-day Saints excitedly repeating Glen Beck’s most recent liberal-bashing. The repeated jokes about how no good Mormon can be a Democrat. The fact that sermons so often unconsciously include political opinion as if it were established doctrine.

Reading the responses on the Salt Lake Tribune article just further cements that feeling: many Mormon right wingers are very happy with the talk, saying conservative/libertarian politics "have as much relevance to our faith as do the breakdown of the family and rampant immorality." We agree that politics and religion are very related, but of course we disagree about their direction. We've posted quite a bit on this topic--in fact, one of the stated goals of MormonLiberals.org is to

demonstrate that liberal politics have just as much Gospel backing–if not more–than do conservative politics. We certainly don’t believe we have a monopoly on truth, nor do we believe our perspective is the only one credibly backed by LDS doctrine.

But, we do believe ours is most credibly backed by LDS doctrine. Otherwise we would have to be Mormons despite our political beliefs. We are liberals because of our Mormon faith, not despite it.

In the months since we posted that goal, we've written about quite a few topics: the relationship between agency and politics, the negative effect conservative policies have on the family, the Mormon argument for a more pacifist foreign policy, the Mormon-inspired liberal view on immigration, the pro-family respect for work that requires a strong safety net, the complexity of the issues of abortion and marriage equality, the bold scriptural charge for liberal politics, the Mormon definition of the word "liberal", and even the validity of Ezra Taft Benson's ultra-conservative and oft-repeated political arguments.
We invite disagreement and encourage discussion, and we hope President DeVisser's talk will help bring these Mormon/political discussions out into the open. Having these discussions can do nothing but good for the cause of the Mormon Liberals.
Community Current Events Political Neutrality DeVisser politics in church philosophies of men
Do you like this post?
Tweet