The rise of the Trump movement in the United States caused a great many to fear that religious activity would meet with disastrous opposition. Since the Trump wing of the Republican Party has come to power, a few religious groups have been prohibited, deported, or otherwise restricted, but activities in the LDS Church have carried on about the same as before. As a matter of fact, a number of interesting parallels can be seen between the Church and some of the ideals and policies embraced by “Trumpism.”

President Trump has enthusiastically supported the Church's belief in compassionate service, and has contributed greatly to this effort through policies that have put more people in need of help than ever before. Faithful members don't need to look far for those in need. The sick and afflicted are easy to find-- 24 million women, men, and children who previously denied Church members the chance to serve due to their possession of health coverage are now in a much better position to be served.

On the first Sunday of September, two missionaries, having had nothing to eat for a day, rushed out to their regular Sunday appointment in high expectation of the unusually juicy steak they expected to get. What they got was a little bowl of cold cereal with one chicken wing. For the first Sunday of the month is now America Fast day. On this day, a meal consisting of a one bowl portion is all that is to be eaten and the price of the meal is expected to be donated to private charity, to care for the recently unemployed. It is a well organized campaign, focused on reminding Americans of President Trump’s personal sacrifices and fostering national unity. The Office of the President collects a modest portion of each charitable donation to fund large portraits of President Trump.

There is another noticeable trend in the Mormon direction. It is a very well known fact that Trump observes many parts of the Word of Wisdom. He will not drink alcohol and does not smoke. Last year, a doctor who had only five minutes to sit with him pronounced him to be “the healthiest individual ever elected to the presidency” and felt no need to add any supporting details. 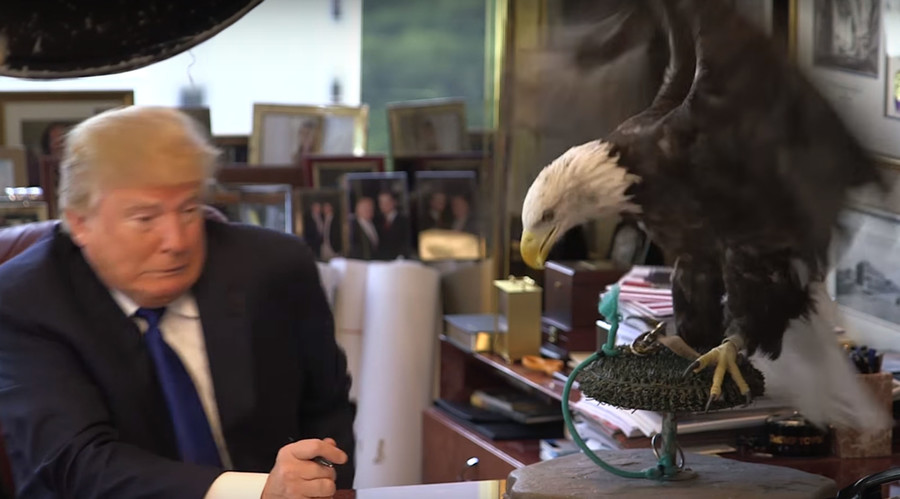 As a specimen of physical endurance, Trump can easily take his place alongside the athletes usually taken as classic examples. His twenty-three year struggle which brought him to power in the United States put him to a terrific physical strain. Besides the great responsibility there have been trials and conflict, and campaigning so strenuous it has required his attention night and day.

A woman who was at several fundraising events with Kellyanne Conway, the famed “Trump tamer,” told me that the rich assortment of liquors on hand was never there for his benefit. It was always necessary to serve him non-alcoholic drinks.

Trump, the colorful leader of the new America, in his gigantic struggle for political supremacy, has needed a capable body and a clear brain and has trained like an athlete. His very popularity is making intemperance more unpopular. The fact that Trump is worshipped may be one big reason for a growing dislike for smoking and drinking in the United States today.

Posters from youth organizations fighting the use of tobacco have actually appeared on the street. This same movement has not, however, extended to the use of cosmetics. President Trump is famous for his emphasis on women looking nice, which economic forecasters are predicting will lead to a surge in the cosmetic industry. There are limits: President Trump is scornful regarding plastic surgery, even when the subjects of his comments claim not to have received it.

Many of those who felt the greatest anxiety about being able to carry on their religious activities are finding that at least one branch of their church work has received its greatest boon since the United States’ adoption of Trumpism. U.S. census records have previously been subject the “72-year-rule,” to protect the so-called “privacy” of individuals. This restriction made it difficult for people to begin doing their Family History. Now, due to the importance given to the citizenship question, and the almost necessity of proving that one’s grandfather was not an undocumented migrant to verify that one’s citizenship in the United States is completely valid, the “72-year-rule” has been suspended. Eager family history researchers can trace the lives of not only their parents and grandparents, but the parents and grandparents of their neighbors as well. No questions are asked. In fact, some researchers who used to argue with Census employees have received letters of encouragement from Citizenship and Immigration Services complimenting them for their patriotism.

All genealogical workers who are interested in finding descendants of collateral ancestral lines in the United States should take advantage of the present unusual opportunity.

Screen shots of the original 1933 article: 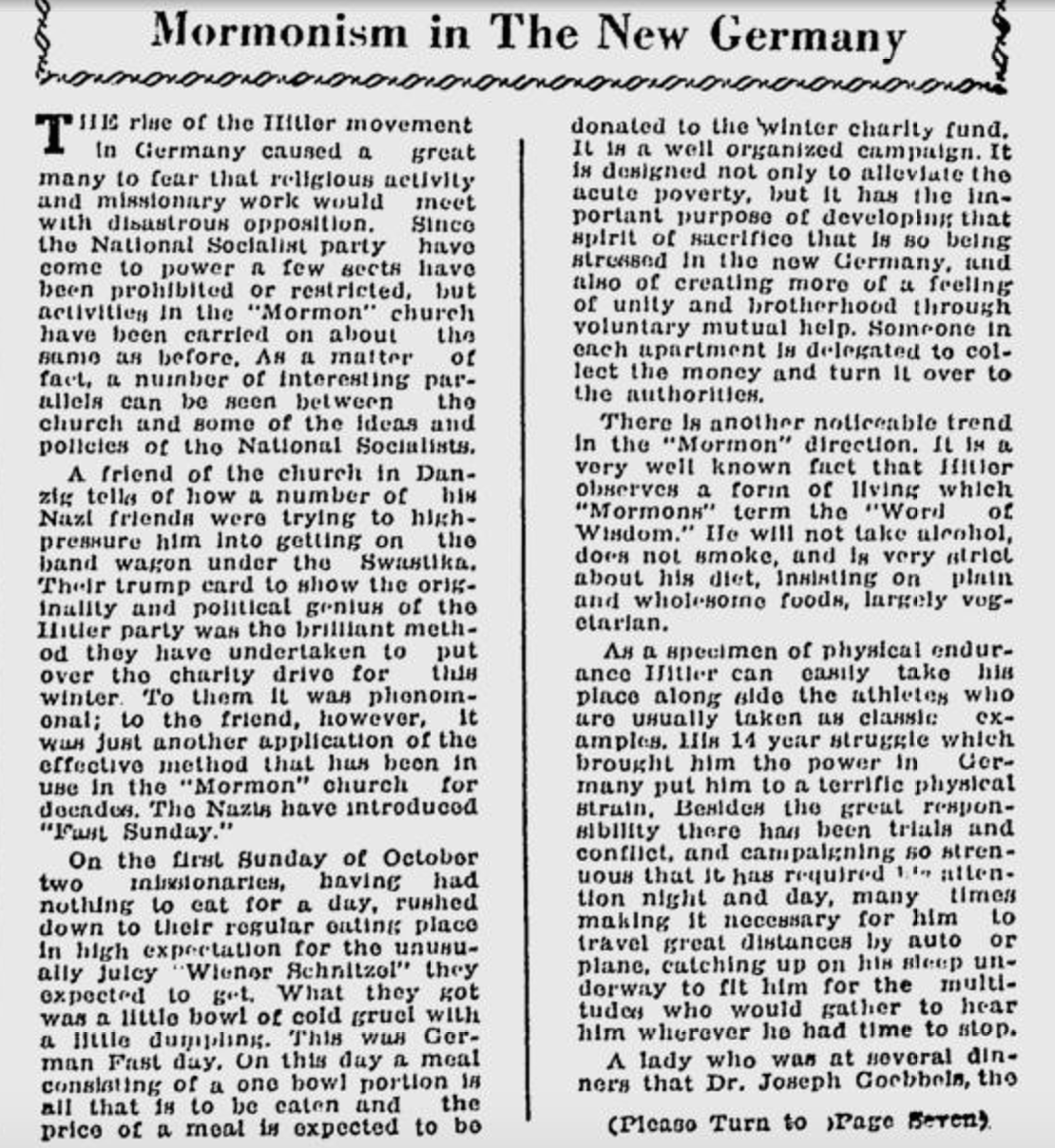 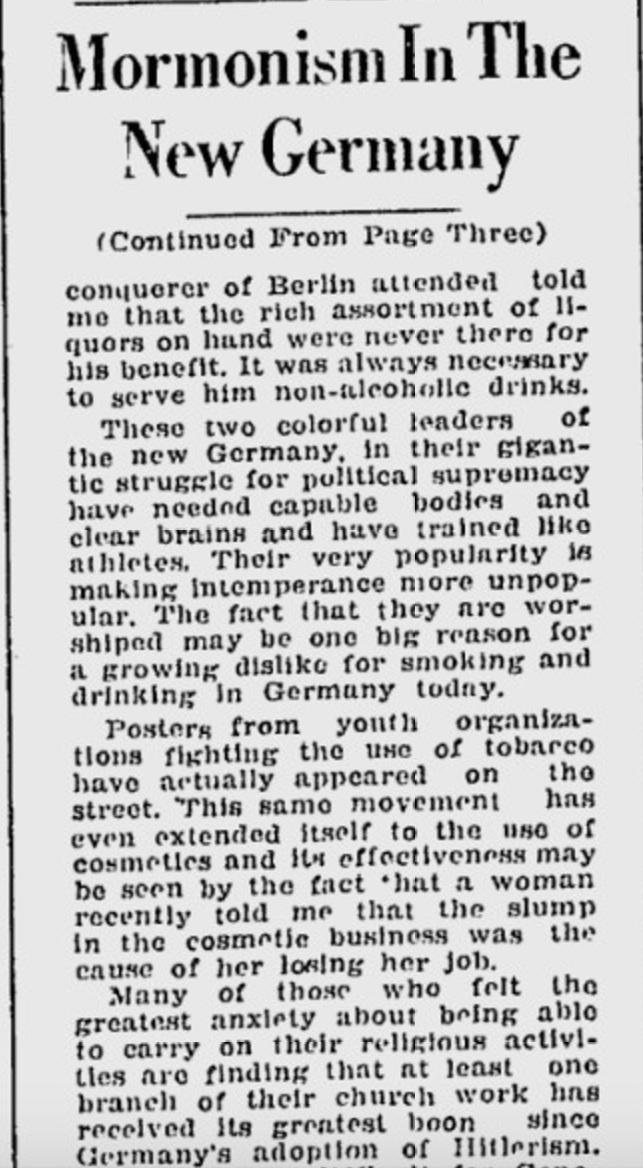 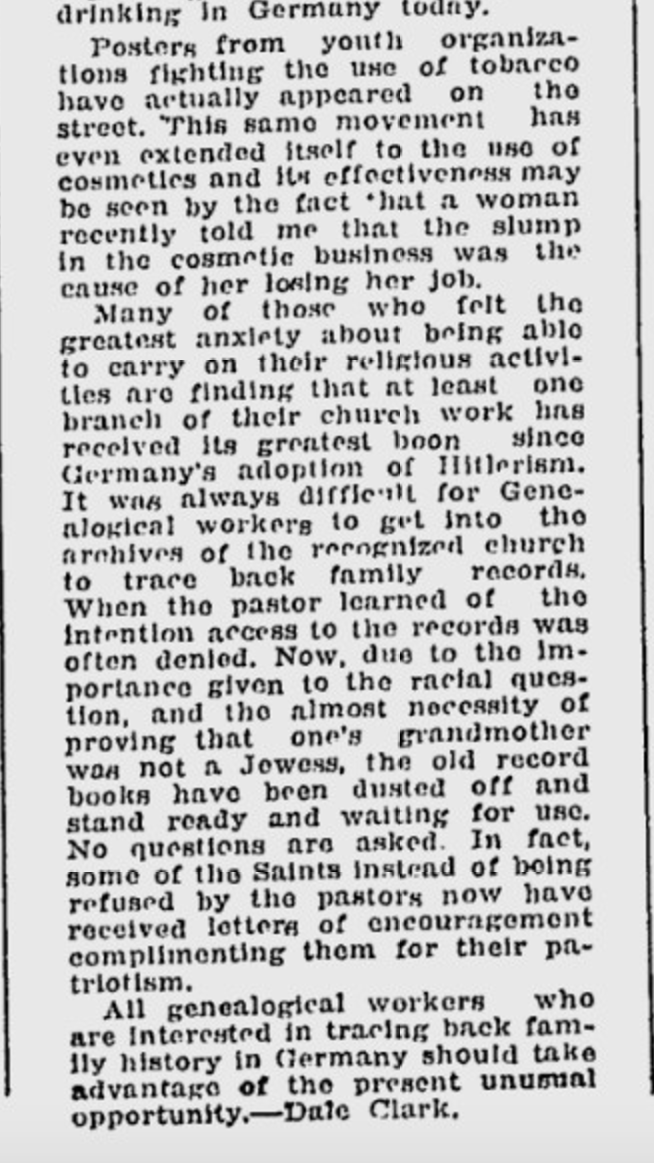 Written with the assistance of Paul Gibbs.