Confronting the Myth of LGBT and LDS Dems

Recently, the Sutherland Institute posted an article regarding LDS Democrats “trying to reconcile opposing values” between our religious and political beliefs. One commenter boiled it down to what I believe many feel is the core reason members of The Church of Jesus Christ of Latter-day Saints cannot also be members of the Democratic party: 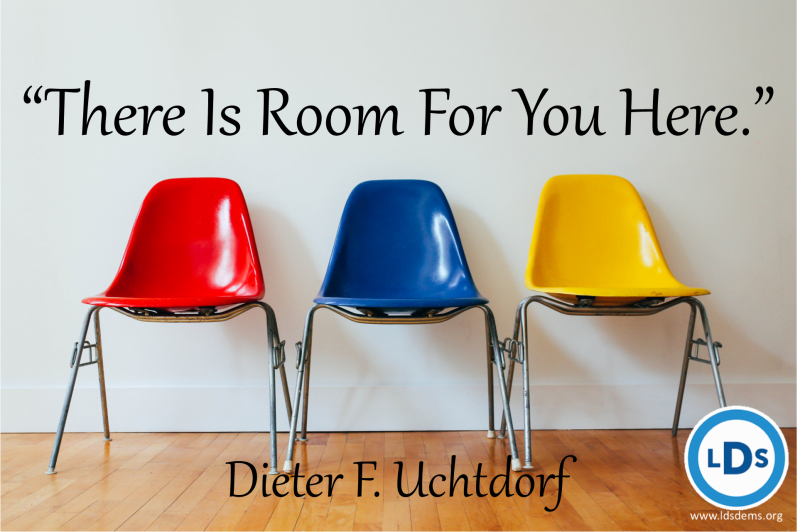 “The [Democratic] party supports gay marriage and abortion on demand. The LDS church supports neither. These are not small or trivial things. Things like education, the environment, immigration, and helping the poor, are small things. As long as the [Democratic] party  supports views contrary to the [Church’s] and these huge issues you can’t be a good Mormon and a good [D]emocrat.”

Never mind that this is a simple, if not erroneously condensed, explanation of the two big issues many of us may have come across time and time again. (Also, forget that education, the environment, immigration, and helping the poor were cast aside as “small things”.) It commonly seems that, concerning the Church and the Democratic Party, many people get hooked on those two issues, namely same-sex marriage and abortion. In reality, views on same-sex marriage are split within the Party, even among high-profile LDS Democrats. Outgoing Rep. Jim Matheson (UT) is on the record as being completely opposed to same-sex marriage; Senator Harry Reid (NV), while stating his personal view of marriage is one of a union between one man and one woman, said he would vote to legalize same-sex marriage in the United States. Unsurprisingly, each of these men has a welcome place in both the Church and the Democratic Party. This division similarly extends to all members of the Church, those who are also Republicans or unaffiliated with any political party, who also have various ideas and beliefs on the subject of gay rights, evident by a perusal of many discussion boards and Facebook posts on the subject. Regardless of how one feels about same-sex marriage, the values of the Church and the Democratic Party are fairly harmonious when considering the treatment of the LGBT community.

One of the principles that brought me to the Democratic Party is its “deep-seated commitment to tolerance, charity, and the well-being of others.” That’s not to say the membership of the Party perfectly exemplifies this principle, or that there isn’t improvement to be made—there is. But these principles—tolerance, charity, and the well-being of others—certainly are ones that we, as members of the Church, profess to believe in. Indeed, they are principles that were perhaps most strongly reaffirmed in October’s General Conference address by Elder Jeffrey R. Holland.

However, tolerance and acceptance of the LGBT community—both in and out of the Church—has many steps to take. Consider, for example, this report by Emric Delton:

“It turns out, there are young men and young women today, who upon discovering having attractions for their same respective gender and struggling with understanding of their own worth, have felt nothing but discontent and rejection from their own community and family. Some of them live in the mountains around [the] Salt Lake and Ogden area because they literally have no place to turn to. They have been made homeless by their own kind and blood in the name of morality, religion and tradition. Even in the 21st century, ‘would be’ morality, religion and tradition, still trump basic human decency, let alone the gospel message of universal Love.”

Also worth considering is this account from Rexburg Chronicles:

“Friends, family, acquaintances; in a moment they could all be gone from your life for no better reason than for your sexual preference. Disowned not because you killed another person, but because you killed the future you they always imagined you’d become.” The author continues, “Most kids like myself are depressed, because we know and we understand this truth. It haunts us daily and yet we can’t show our depression because then people will dig into us to try to solve a problem we can’t dare let them discover.”

Neither of these accounts resemble the gospel I’ve been taught all my life, the gospel I taught as a missionary, or the gospel I continue to believe in today. One of the most striking moments from October’s General Conference came from Elder Dallin H. Oaks’ address. In it, he reaffirmed the official position of the Church regarding the issue of same-sex marriage, but said “Followers of Christ should be examples of civility,” following gospel teachings to love our neighbor and avoid contention. “We should love all people,” Elder Oaks continued, “be good listeners, and show concern for their sincere beliefs. Though we may disagree, we should not be disagreeable. Our stands and communications on controversial topics should not be contentious.”

Perhaps most profoundly, Elder Oaks stated that members of the Church “should be persons of goodwill toward all, rejecting persecution of any kind, including persecution based on race, ethnicity, religious belief or nonbelief, and differences in sexual orientation.” To me, that sounds like the textbook definition of tolerance.

Steps are being made to help the LGBT community, particularly those who identify or identified as both LGBT and LDS, know that they are still welcome within the Church. A large part of this effort occurred when the Church launched the website mormonsandgays.org; on the local level, these efforts are being made by congregations in Seattle and the San Francisco Bay area. “We want to make our congregations safe, more welcoming, more loving spaces where all our members—gay or straight—can fellowship and worship together, regardless where they are in life,” said Aaron Brown, a stake high councilor in the Seattle area, who was part of a recent initiative to welcome back gay members who had previously felt disaffected within the Church.

“LGBT individuals are welcome to come to church regardless of where they are in their personal lives,” said Mitch Mayne, an openly gay member who served as the executive secretary in the bishopric in his San Francisco ward. “Single and living under the confines of the policy as we understand it today, married to a partner of their same gender, or dating someone new every night. There is no Bishop’s interview to sit in the pews on Sunday. There is no test to take to come to Sacrament or any of our meetings or events. Everyone is welcome, just as they are.”

In his concluding statement, Mr. Delton said that the Church is “made up of people who come with their own perspective, cultural and life experience baggage.” The world-wide, fifteen million body of Church membership is rife with diverse experience and opinion, including those that, on occasion, conflict with official Church doctrine. As a big tent church, we have members who are vehemently opposed to same-sex marriage, those who oppose changing the definition of marriage itself but are fine with state-recognized civil unions, and those who have no problem with same-sex marriage. All of these members are welcome to come to every meeting on Sunday, partake of the Sacrament, and participate in discussions of the Gospel of Jesus Christ.

As the largest political party in the United States, it should come as no surprise that Democrats don’t agree on everything either, including gay rights and the definition of marriage. But those who disagree with the official Party stance are still welcome to participate. There’s no “gay rights” litmus test for joining and participating in the Democratic Party, and disagreeing with the Party’s official stance won’t preclude anyone from doing so.

Regardless of where we, as members of the LDS Church and Democrats, stand on the issue of same-sex marriage, what we can and should agree with is the Party tenet of tolerance, and the lesson taught to us by Elder Oaks, which reminds me of the story of the Mote and the Beam, as well as the Savior’s command to “love one another; as I have loved you, that ye also love one another”.