For Republicans, Self-Reflection as “Weakness” 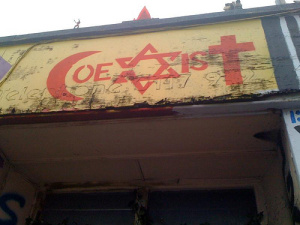 You have probably heard quite a bit by now about a recent incident in Afghanastan in which several Qurans were burnt by US military personnel at Bagram air base. Apparently the Qurans had notes written in them by prisoners, and upon discovery were confiscated, mistakenly added to other garbage at the base and at least partially incinerated before being noticed by Afghani staff.

In the wake of the incident radical elements of Islamic extremists used the situation to foment anti-American sentiment, which ultimately culminated in riots that killed more than 30 people, several of them American service members.

As the controversy began to heat up President Obama wrote a letter of apology to Afghan president Hamid Karzai. Secretary of State Clinton and the head of NATO forces in Afghanistan, General John Allen, also issued apologies for the incident.

It was these apologies, and particularly the President’s, that set off its own controversy generated by the Right-wing media machine here in the U.S. Media Matters recently compiled an astounding set of clips from FoxNews on this story. (http://mediamatters.org/research/201202280001). 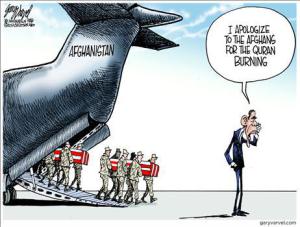 Why should we apologize to terrorists who blow up civilians, throw acid in the face of schoolgirls and kill people over a burned book when they don’t apologize to us? As another Fox contributor, Charles Krauthamer, put it, “when I hear that [apology from their side] I'll expect my president to start issuing an apology.”

So, from what I have gathered, a good portion of the Republican electorate thinks that President Obama’s apology was insulting to America and its troops, pathetic, weak and harmful. Leaving the efficacy of the apology aside for the moment, I’d like to reflect on the substance of the Right’s inane reactions.

The reality is that the war that the United States is fighting in Afghanistan is not a ‘traditional war’, but rather a culture war. There are fundamentally differing views about the world on the two sides, views that cannot be softened with the help of shared history, customs, language or faith. A more amicable America is not Al Qaeda’s goal any more than a more democratic Afghan terror cell network is the goal of the U.S. We will never ‘agree to disagree.'

Because we are engaged in a culture war, the opinion of the vast majority of Muslims across the world whose minds and support are being fought over are very important to our goals. We will never win those minds and support if Muslims believe we don’t respect their beliefs. To ignore public opinion of Afghanis and other Muslims is not only idiotic, but also deadly. It should be noted that there actually are some conservative political minds that understand this, and so support Obama’s decision to apologize, in addition to a number of military minds as well. (See the Media Matters link).

As one observer pointed out, Hamid Karzai is a weak president struggling to maintain his tenuous grip on power. Whether we like him or not, he is our guy right now, and we need him to succeed for stability in Afghanistan to even be a possibility. What Obama did with his written apology was to give Karzai a tool to use as he worked to confront this mini-crisis at home. Karzai actually read the letter to the Afghani Parliament in the aftermath, using what he had to get what he could.

These common sense reasons to apologize were even obvious to George W. Bush, who apologized not once, but twice, to foreign nations for desecration that occurred to the Quran on his watch.

But beyond the common sense reasons to be culturally sensitive to the Muslim faith that is followed by millions across the globe, there is another reason, an even better reason, for being thoughtful. That reason, of course, is because it is the right thing to do. Rather than subscribing to Krauthamer’s ‘only do good unto others when they have done good unto you’ worldview, I am more inclined to go with another philosophy, something more like ‘do unto others as you would have them do unto you’. Now who was it that said that? Maybe the Right believes that this only applies when it’s easy.

Because I am a Mormon, I am sensitive to how the outside world treats my faith. Beyond the history of forced dislocation, assassinations and open hostility that the early Mormons endured, I have personally had to defend my faith in public arenas, classrooms and in conversation. I know this is not unique to me, but is a common experience for many members of our church. As Mormons, “We claim the privilege of worshiping Almighty God according to the dictates of our own conscience, and allow all men the same privilege, let them worship how, where, or what they may.” [*] Of course this does not mean we sit idly by while minority fanatics attack us in the name of their God, but it does mean that we should show Muslims the same degree of respect that we believe our faith deserves.

Leave it to the Right-wing to call Obama’s common sense response to the situation “irresponsible and unnecessary”, an olive branch as “outrageous”, likening it to groveling before a foreign power. And who would you expect but Rove and his ilk to see what others might recognize as self-reflection and honesty as “weakness”. Is theirs a world you want to live in? Me neither.


[*] The Church of Jesus Christ of Latter-Day Saints’ 11th Article of Faith.