GOP is Not Reagan’s Party 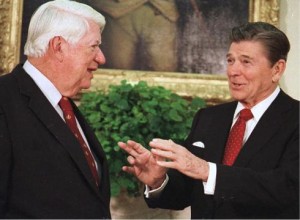 The end of today's Republican Party is near.  Just ask Bob Dole, previous Republican presidential nominee and Senate Majority Leader who’s recent appearance on Fox News has created a stir, “I think they ought to put a sign on the national committee doors that says ‘closed for repairs’ until New Year’s Day next year — and spend that time going over ideas and positive agendas.”  When asked if he or President Reagan would be elected by today’s Republican Party he responded, “I doubt it. Reagan couldn’t have made it…we might have made it, but I doubt it.”

The Republican base continues to scream into an echo chamber fueled by the right wing media which dismisses any opposition as liberal propaganda.  This rejection of differentiated thinking closes the window for compromise and collective understanding.  Once the overreaching rhetoric is exposed without support from new ideas or strong leadership, the right is forced to change the rules to avoid irrelevance (ie. gerrymandering and filibusters).

The GOP has separated itself from every minority voting block.  The Southern Strategy and Civil Rights opposition has carried through several decades with Black voters.  Anti-immigration and over reaching border security rhetoric has dispelled the Hispanic vote.  Pro-life heretics and insensitive comments by prominent Republicans leaders have alienated the woman vote.  Venomous opposition to gun control, gay rights, and unapologetic military policies has lost the moderate vote.  Voter registration continues to favor the left across the younger population which will lead to a healthy majority in the years to come.

Obamacare will be the final nail in the coffin of GOP relevance.  The ideas for insurance mandates and exchanges were initially driven by Republican leaders and conservative think tanks opposing President Clinton’s universal healthcare legislation. With inclusion under Obamacare the right should have lined up with support.  With early adapter states already demonstrating the positive power of market driven exchanges, its easy to understand why voting to repeal the law 37 times is a priority for the Republican controlled House.  It also signifies the de facto strategy for the right; a lack of ideas drives the need to dismantle opposing ideas.

Bob Dole’s frustration with the Republican Party’s direction is not inconsistent with many tenured GOP activists.  It is also very telling of the lack of leadership and recessive ideas that lead party members to oppose any hint of cooperation.  Infighting between inter-party groups is dominating Capital Hill driven by extreme primary candidates elected under the pretense that compromise is akin to failure.  It is under this environment that the GOP needs to reinvent itself, much like Clinton’s “New Democrats”, or face irrelevance.

In 1962, Reagan's defection from the Democratic Party didn't come as a surprise. "I didn't leave the Democratic Party," he explained. "The party left me." If Reagan was alive today he would say the same thing about the Republican Party.  His support of the Brady Bill, balanced budgets that included tax increases, compromise to drive political progress, immigration, and amnesty support would leave him off the invitation for the next CPAC meeting. Reagan knew the power of political middle ground, which has been lost on today’s GOP.