Obama, Gay Marriage and Me 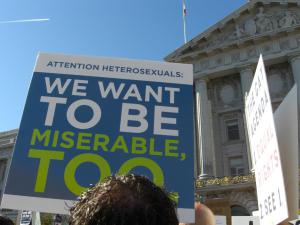 This is the second post in a series of viewpoints on Obama's support for marriage equality.

After Obama recently came out in support of gay marriage our housemate, a liberal self-identified atheist, asked my wife if we were going to take the “I’m Voting for Obama, and I’m a Mormon” bumper sticker off of our car. Apparently he assumed that any politician who supported gay marriage would be a politician we couldn’t, as Mormons, support.

While I can understand why he might have jumped to that conclusion, it is unfortunate that the image he had of us was so closely tied to the most vocally conservative of the Religious Right.

While gay marriage is a moral/social issue that I do have feelings about, it is certainly not the only moral/social issue I take into consideration when deciding how to vote. I also believe that how candidates address questions of war, poverty, equality, capital punishment, social programs aimed at supporting our nation’s most vulnerable and the environment as important moral indicators as well. And with respect to each of these moral questions, it is clear to me that Obama, and the Democratic party generally, more closely represents what I believe would be Christ’s position on such issues.

I am not single-issue voter, as no person who is concerned with the bigger picture could be. That said, looking specifically at the issue of gay marriage I see some elements of Obama’s stance that I can support. And it isn’t just me, but the Church as well.

Back in late 2009 the Salt Lake City council was debating a series of non-discrimination ordinances designed to make explicit certain rights for same-sex couples. Weighing in on the controversial topic, the First Presidency released a statement that reads, in part, that the Church "does not object to rights for same-sex couples regarding hospitalization and medical care, fair housing and employment rights or probate rights." The Church also said that it is “not anti-gay”, but rather “pro-marriage between a man and a woman. And there is a huge difference between those two points.”

I spend enough time with non-Mormon lefties to know that many of them have a very hard time distinguishing between those two points, and I would be lying if I said that this issue does not cause some friction between many of my friends and me. That said, it is clear to me that a), God wants us to, first and foremost, treat all of our brothers and sisters with love, and b), that it is completely appropriate to push for equal rights and responsibilities for same-sex couples that heterosexual couples currently enjoy and are subject to – even if we don’t call it marriage.

So while I may not be on the same page with Obama concerning all aspects of his support for gay marriage, I would have to say that our views are compatible on about two-thirds of the issue. While that isn’t 100%, it is a great deal better than the Right’s alternative of continued disenfranchisement and denial of reality.
Contributors gay marriage mormons Obama
Do you like this post?
Tweet