My family recently visited Craters of the Moon National Park. Shortly after I returned I read a story from the Salt Lake Tribune entitled “Park aims to reduce congestion at Utah’s Delicate Arch trailhead.” The article said that Delicate Arch in Arches National Park is currently receiving 1,000,000 visitors a year, and in its peak season over 2,000 a day. This creates a problem since the trailhead parking lot can only accommodate 73 cars. People often park illegally which blocks traffic and the park authorities are trying to figure out a solution that will allow for as many visitors as possible while protecting the delicate dunes and sandstone arches in the park for future generations.

I somewhat facetiously responded on the Salt Lake Tribune website and on Facebook that the solution was to “Ban Republican/Tea Party hikers since they want to sell/privatize the national parks and drill in them for oil. If they do not believe in/want national parks, why should they get to visit them.” Now, I would never seriously deny anyone access to public lands, but some Republicans are serious about trying to privatize them and have been for several years. For example you can see the following stories “‘We can’t wait’: Utah lawmakers ratchet up fight for federal lands," “Utah on verge of passing bill demanding Feds relinquish public land,” “The Republican Party Now Wants States To Seize Public Lands For Drilling And Mining," and “RELEASE: New ‘Bundy’s Buddies’ Series Examines the Politicians and Special Interests Who are Working to Seize Taxpayer-Owned Public Lands." That last story relates to Cliven Bundy who preached that the federal government does not have the right to own land, he urged his supporters to take over federal lands including national parks. The following graphic lists Congressional candidates in the next election who support privatizing and exploiting our national parks, monuments, and forests. Notice that there are no “D’s” on the list and how many come from Utah: 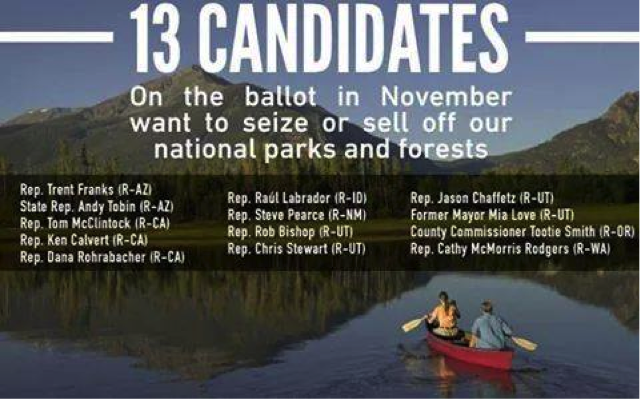 You may have also have heard this recent story out of Utah: In May of 2014 San Juan County Commissioner Phil Lyman (Republican) led 200 supporters on ATV’s on an illegal drive through closed roads in Utah’s Recapture Canyon. This is an area with many important and sensitive prehistoric sites that the Bureau of Land Management is trying to protect. And some selfish people felt that their “right” to drive roughshod through the area is more important than preserving the area for future generations to enjoy as well (see http://www.sltrib.com/sltrib/news/57909181-78/canyon-amp-blm-federal.html.csp).

“The fundamental purpose of the parks is to conserve the scenery and the natural and historic objects and the wildlife therein and to provide for the enjoyment of the same in such manner and by such means as will leave them unimpaired for the enjoyment of future generations.”

To me that is VERY important. The people who visit our national parks do so for a variety of reasons. Some visitors go for the scenery, some just want to have fun, some go to learn, others are there for adventure, there are those who visit to seek peace, and others seek to connect with nature. I have visited the parks for all of these reasons. But while some trips were fun, and some were adventurous, and some were educational, for me, every visit to a national park is also a spiritual and a sacred experience. I believe that the lands that have become our national parks are a gift to all of us from God. I believe that they were created “both to please the eye, and to gladden the heart” (Doctrine and Covenants 59:18). To me, our National Parks, and many of our State Parks, are natural temples. As a Latter-day Saint I have felt the Spirit just as strongly in these natural temples as I have in the temples that have been built by the Church. I have had sacred experiences while standing under Delicate Arch, while watching the sun rise through Mesa Arch, while exploring Bryce and Zion’s canyons, while looking over the rim at Dead Horse Point, while staring into the “Heart” of Timpanogos Cave, while standing on the Lava flows of Craters of the Moon, and at many other such places of natural wonder and beauty.

While at Craters of the Moon my family learned that the job of the Park Rangers and officials is a complex and difficult one. They have to find the delicate balance between allowing current visitors to enjoy the parks while at the same time restricting some access and protecting the delicate beautiful features the parks for those who come after us. I believe that we should do all we can to help them and give them the money and tools that they need to fulfill their mandated mission. The idea that anyone would wantonly destroy the sacred sites in these parks for a moment of pleasure, or far worse, exploit them for the profit of a few members of an elite class at the expense of the rest of us sickens me. These lands must be protected; it is our duty as stewards of the Earth to protect them.

I admit, I do not have all of the answers. The rangers and the materials at Craters were pretty blunt about the fact that both protecting and allowing visitors to enjoy the park is tricky business. I have heard the same while visiting Arches. I will start by voting for political candidates in my area that support our national parks instead of those who do not. I would encourage readers to learn about groups and agencies that support protecting our national parks and other natural treasures. Some that you may find are worth looking into are The Mormon Environmental Stewardship Alliance and LDS Earth Stewardship. There is one more very important resource specifically for Mormons. It is common for Mormons to be conservative politically and it is common for Mormons to not accept an idea or teaching unless it can be traced “officially” to The Church. I have actually heard politically conservative Mormons get up in church meetings and teach that those of us who seek to protect the environment are following Satan.

For environmentally friendly Mormons who run into these kinds of problems you will be happy to know that the official Church website, lds.org, on its “Newsroom” page has links to the Church’s stance on being environmentally friendly. The page is called “Environmental Stewardship and Conservation”. It has an opening quote by Elder Russell M Nelson that says,

“We should care for the Earth and preserve it for future generations.”

It has a link to statements on the importance pf protecting the environment from the scriptures and from prophets from Joseph Smith to Gordon B Hinckley, as well as from some of the apostles. It links to an official talk by Elder Marcus B. Nash of the 70 titled: "Righteous Dominion and Compassion for the Earth." It has links to pages showing what the Church is doing to be environmentally aware including building “Green” church houses. And finally it has a link to a BYU Religious Studies center produced book entitled “Stewardship and the Creation: LDS Perspectives on the Environment” that can be read online for free. These “official” Church materials should prove helpful for anyone who hears that “environmentalism” is wrong in church or who wants to share their desire to protect the environment with their LDS friends or family but are told that they will only read or listen to “official” Church materials. The main site here, the quotes are here, and a transcript of Elder Nash’s talk (which is also available as a video) is here.