UPDATE: Thanks to some smart and thorough commenters below this post, my opinion on this is in flux. I am still mostly in favor of what I've written below, but I have additional questions. For example, why did Eich decide to step down? Was it the CREDO Mobile and OkCupid protest? Was it the pressure from Mozilla employees and community members? Also, to what extent was this about his past support of Prop 8, and to what extent was it about his current statements defending that past support? In any event, thanks to the people who posted thoughtful comments below. Smart discussion and disagreement is exactly what should happen with issues like these. 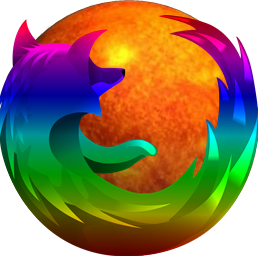 Okay, so what are we to think of this? Is it now okay to pressure someone out of a job because of personal opinions? Whether or not Mr. Eich's beliefs were based on his faith, this seems to have huge implications for religious freedom. Intolerance and hate are bad, we can all agree on that, but doesn't that go both ways? You just can't be intolerant against someone who disagrees with you.

I see two issues here that are important to note. First, Mr. Eich didn't step down solely because of his beliefs--he'd been in top leadership at the company since at least 2005, and it was no secret that he'd supported Prop 8. Will Oremus sets the stage:

In 2008, California voters narrowly passed Proposition 8, a constitutional amendment limiting legal marriage rights to heterosexual couples. Four years later, it came to light that Eich had been among Prop 8’s supporters, donating $1,000 to the anti-gay marriage campaign. The revelation sparked a righteous Twitter storm among technophiles, who tend to lean socially liberal regardless of their economic views. As far as I can tell, however, it did not lead to broad-based calls for Eich to resign from his post at Mozilla, where he had been Chief Technical Officer since 2005.

So Mr. Eich wasn't pressured just because of his beliefs. A CEO, as I understand it, has a literal role and a symbolic role. In the literal role the CEO leads meetings and addresses stockholders and sets strategy and all kinds of hard rubber-meets-the-road stuff for the corporation. But there's also a symbolic role, one where the officer embodies the values, sets the tone, and interprets the mission of the company. Apparently there was little issue with Mr. Eich's literal CEO credentials--he'd been CTO for years and hadn't faced any significant backlash. It was the symbolic issue that mattered.

Which brings me to my second point: Mozilla is a unique company. They addressed the whole situation with a thoughtful blog post, beginning with the following:

Mozilla prides itself on being held to a different standard and, this past week, we didn’t live up to it. We know why people are hurt and angry, and they are right: it’s because we haven’t stayed true to ourselves.

So Mr. Eich didn't leave because of his beliefs, but he left because his beliefs didn't jive with the company's ethic and mission. You would be sending an odd message if you elevated an Occupy Wall Street supporter as CEO of CitiBank, right? Back to Will Oremus:

An organization like Mozilla might tolerate that in an underling, and it might even tolerate it in a CTO. But in a CEO—the ultimate decision-maker and public face of an organization—it sends an awful message. That’s doubly so for an organization devoted to openness and freedom on the Web—not to mention one with numerous gay employees.

It’s an even bigger problem for a tech company in Silicon Valley, where competition for top engineers is fierce. Mozilla’s edge over goliaths like Google and Facebook is that it offers employees a chance to work for an organization whose values they can truly believe in.

When an organization is so values-driven, those values are going to play a role in CEO selection. Maybe this isn't an issue of Mr. Eich's values being under attack, after all. Instead, maybe it's an issue of Mozilla's values being undermined, and what they have the right to do when that happens. The Economist, for example, puts this in almost religious terms:

Mozilla isn’t a typical company. It is more of a community organisation that is strongly committed to so-called “open-source software”, which is developed collaboratively and then licensed for use in such a way that it can be studied and changed easily by others. The outfit also campaigns actively to keep the internet open in the face of efforts by a few giant tech companies such as Google and Facebook to carve it up into fiefdoms that they rule over.

So Mozilla is a bizarre beast in the world of tech: part business and part internet missionary. It also relies heavily on the goodwill of programmers and others to support its efforts. To woo them, the outfit has stressed that it is an open and inclusive workplace.

I do not want to live in a world where religious beliefs are grounds for termination. But I just don't think that's what has happened here. Mr. Eich was fine at the company in a significant literal leadership role, but as soon as he took the symbolic leadership mantle of CEO of this particular company, it was a whole different story.

As one final comment, I often try to put myself in others' shoes to help understand what they're thinking. I imagine if Mozilla's CEO stepped down after a hubbub over anti-Mormon views. I imagine that he had worked to pass legislation in California that would disallow members of the Church of Jesus Christ of Latter-day Saints from voting, or something like that. (Update: edited this to account for the fact that the Mozilla CEO stepped down 100% of his own choosing) And I imagine he suddenly came to the realization that it wouldn't make smart business sense for him to head a this company, based in Utah in this imaginary situation. I believe most Mormons would be mature enough to endure an anti-Mormon CTO, but once the company validates that viewpoint by elevating it to the top, maybe we'd think twice before applying to work there, or to send them our business.

It's a tough issue. I just don't see it as an attack on religious freedom. 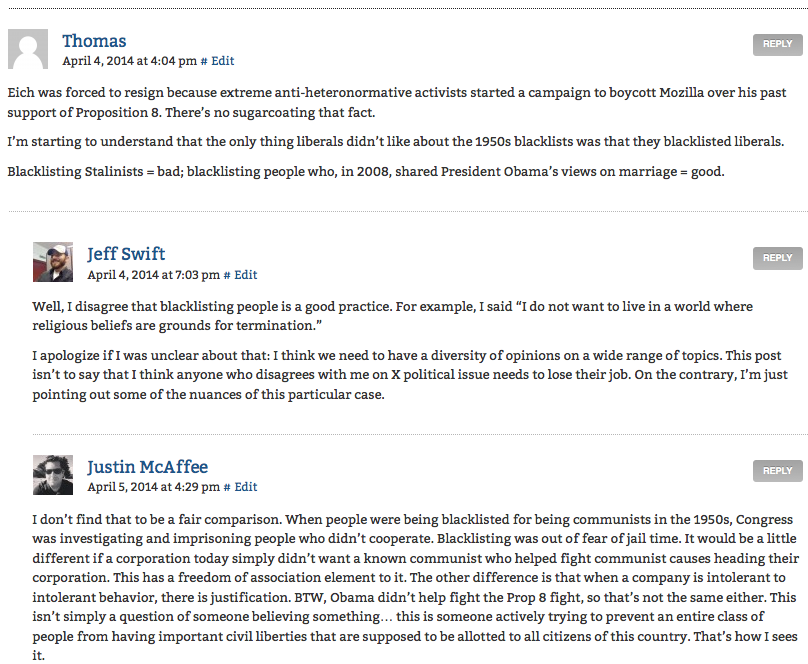 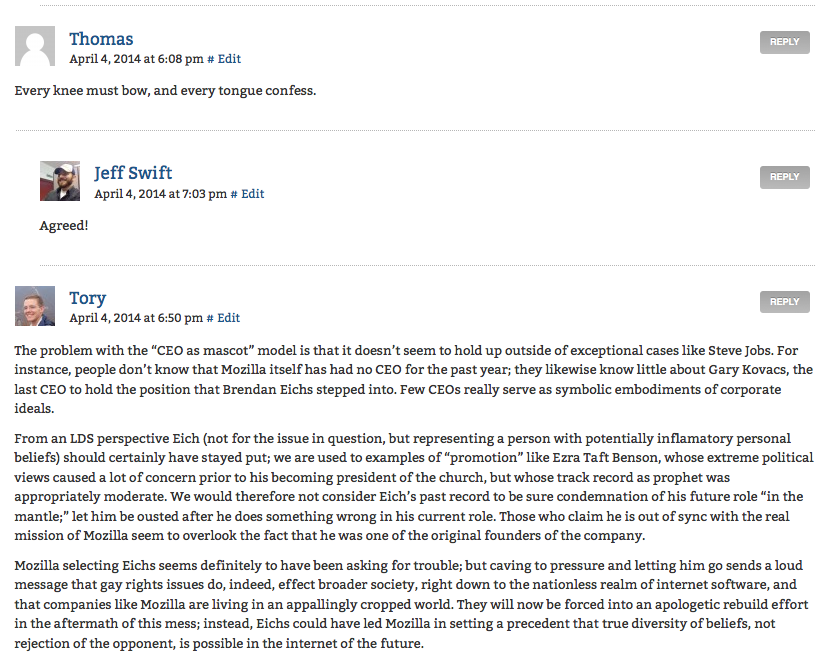 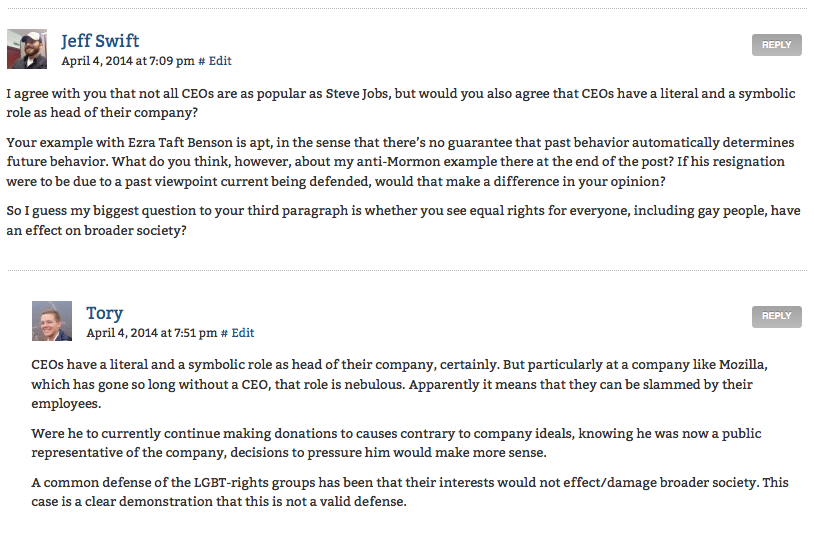 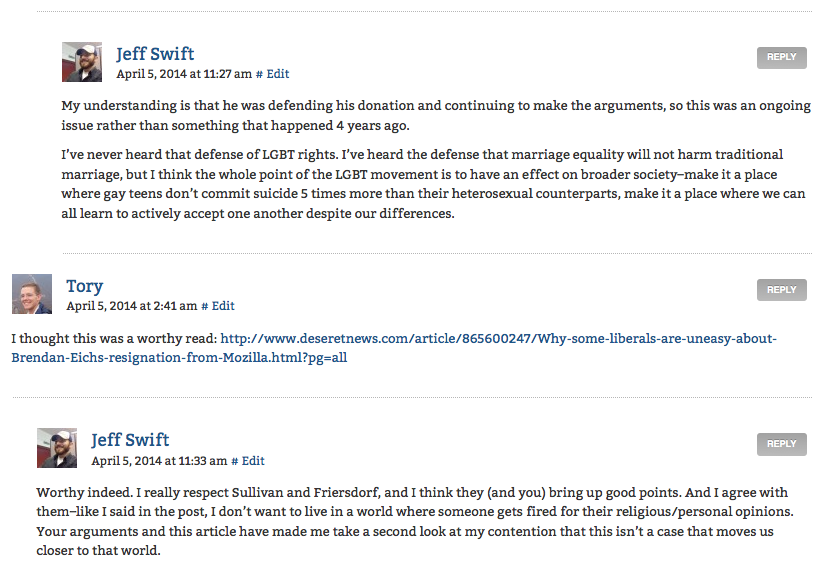