True (and Are We Really Still Asking this Question?) 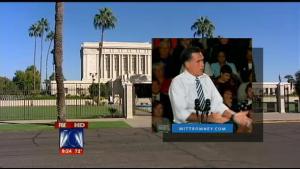 Dan Spindle from some Fox News affiliate in Phoenix, Arizona has an article/news piece, entitled, "Can a true Mormon vote for Obama?"  (The video is attached to the article, but don't bother to click on it; it doesn't seem to be working at the present.)

But seriously?  My first issue is that this whole topic has already run its course in the news cycle.  To borrow President Obama's joke from this past debate (which he borrowed from some frat guy): Hello, Dan? March 2012 called and wants their junior-college essay on "Wow there are Mormon Liberals!" back.  Apparently this writer missed the flurry of news stories about Mormon Democrats that appeared online throughout the Democratic National Convention.

But honestly, that isn't my real issue this piece - because I wasn't bothered in the least when the KSL covered Mormon Democrats in a news story a few weeks back - and in fact, it featured Hannah and Ben from BYU Democrats and we wrote about it here on Mormons for Obama.  My true issue is Dan Spindle's use of the word "true" in posing his titular question.  He follows it up with, "Can a faithful Mormon be a Democrat? We wanted to find out."  He proceeds with his investigation by interviewing several Mormon Democrats, and he cites the examples of Harry Reid and a general authority who used to be a Democratic state congressman.  Ultimately he ends by quoting the Church's position on neutrality, and he also includes a quotation from Jill Henrichsen, a Mormon Dem.  She says, ""For a church that tries to teach the gospel to others, of course all these people are going to come from different backgrounds and have different beliefs and there absolutely has to be room for that, and more tolerance."

So I guess that means the answer is yes, a true Mormon can vote for Obama?

Well, the answer is clearly yes for the many of us who have (or will) cast our vote for President Obama on November 6th and then turn right around and sit in sacrament meeting on Sunday, November 11th with our conservative Mormon brothers and sisters (regardless of who wins).  Of course we'll all breathe a sigh of relief that it's not fast and testimony meeting, because that might force a few of us out into the foyer.

But the real question is what does Dan Spindle mean by "true Mormon?"  Because I think true might also mean that if you say one thing during the Republican primaries, you would say the same thing now.  Or true could also mean that if you promoted a health care plan that extended coverage for most of the citizens of your state (and did so with an eye to running for president with that plan tucked under your arm,) that you would continue to support that plan regardless of its political expediency in the present.  Or true would also mean that if you spent hours upon hours (and a good amount of your own money) serving others while Bishop (pastor?) or Stake President, that you would also support public policy that benefitted those same people you'd privately helped.  And true should also mean that if you are going to constantly talk about the 23 million people in America who are out of work, you would not then malign these same people by inferring that they're irresponsible and lazy while speaking privately in front of your super-wealthy homies at a fundraiser.

Contrary to my better judgement, and Marianne's advice, I have worn a bit sensitive to the questioning of my faith because I support President Obama.  So journalists out there: please don't even ask the question about who is a true Mormon and who is not.  Leave it to us Mormons to argue about that among ourselves; also you can rest assured that we will be certain to include our friend and fellow Mormon, Mitt Romney, in the debate as well.  (And Dr. Gregory Prince has already gotten this started for us.)

Well... unless Dan, you are Mormon yourself... (And you just might be, considering you are from Phoenix, Arizona, which is like baby Provo, and you have a BYU/GAP haircut, and you called the Church by its correct name, and you knew where to find all those Mormon temples.) If you are LDS, then just forget I wrote any of this, and nice tie by the way.
Civility Contributors Democrats fox news mormons Progressives
Do you like this post?
Tweet