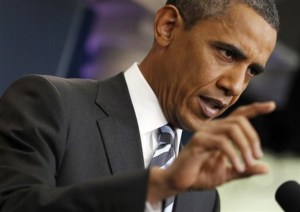 Brothers and sisters, there is nothing more dangerous than fear. We learn about that in Sunday school all the time. I want to talk with you a little bit about the fear of being open about political opinions. I am not suggesting that anyone is wrong or ignorant for being quiet about their support for President Obama, and I certainly am not giving expert advice on the topic. But I want to point out a few things on the topic of fear of sharing political opinions. Here’s why:

1.  This is America. You are entitled to freely express your political opinions without fear of repercussion from the federal government. Oftentimes in our culture we extend this to mean that you shouldn’t fear repercussions from anyone simply because of your beliefs. This security to state your stances freely is fundamental to our identity as Americans engaging in the political dialogue of this nation.
2. The concept of declaring your beliefs freely is also deeply engrained in Mormonism. From the oft-quoted Romans 1:16 (For I am not ashamed of the gospel of Christ) to the brave and heroic examples of our pioneer ancestors, we have a strong tradition of actively making our true convictions known, even when to do so puts us at odds with those around us.
3. Even if, after boldly admitting that you support President Obama, someone were to react negatively such to make you regret being open about it- their intolerance is their problem. As Mormons, we are told to surround ourselves with good people. There are plenty of good people who may not share our political beliefs but appreciate civil discourse and sharing opinions with an open mind. If someone you meet is going to give you a hard time about your beliefs purely because they disagree with you, it might be a good time to evaluate if they will be a good influence on your life in the first place.

Granted: there may be people already in your life, such as friends, family, and coworkers, who may be intolerant and unavoidable. How you handle those relationships is of course a personal decision. Additionally, I am not suggesting that we should risk death or any other extreme outcome in exchange for openly supporting President Obama.

What I am advocating for is a little less fear and a little more faith.

I openly admit that I relish the occasional dirty looks from people who are anti-Obama when they see that I support our President. It reminds me that "there must needs be opposition in all things," and that there is still a lot of work to do to re-elect him.

Every day that goes by when another person finds out that I’m an Obama supporter (it usually becomes known pretty quickly- as I said, I’m extremely open about it) and they get excited to find someone who shares their passion, I am grateful that I put on that Obama shirt or brought my Obama water bottle with me. I cherish the opportunity to connect with like-minded people and to express my deeply held opinion that Barack Obama is the best candidate for President. No amount of insult, derogatory gestures, or rude glances can invalidate that belief. I'm not suggesting that my commitment to Obama is deeper than anyone else's- simply that I choose to risk negative encounters because I value finding those few people in Provo, Utah who do also support the President, and those positive encounters are worth the risk for me.

If we all stood a little taller, spoke a little more freely in the appropriate settings (i.e. not at church), opened our minds to the possibility that those who we thought previously would brazenly disparage our opinion might not be as churlish as we had imagined- who knows what deeper relationships and more significant connections we might develop.

Conversely- for every opportunity we pass up to share our convictions about supporting our President, we’ll never know which voter we may have reached, directly or indirectly, who might have cast the deciding vote for President Obama.

So perhaps now would be a good time to take a minute; think about how you represent yourself and your beliefs. Heading into the heated and controversial campaign season this fall, we could have a little less fear and a little more faith that the benefits of being open about our support for the President will far outweigh the potential for push-back.