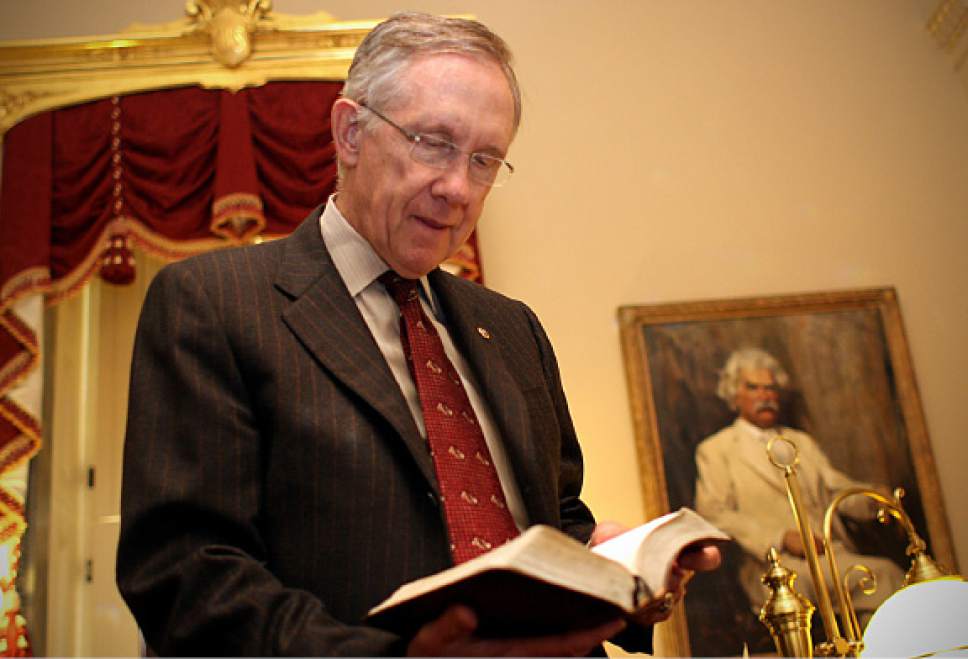 First, humor me while I share a couple of personal stories. When my oldest child was three weeks old, my little family made the 6.5 hour drive to Las Vegas from SLC in order to meet Senator Harry Reid as representatives of the Young Democrats of Utah. We also met VP Al Gore, but as we are Mormon Democrats, guess which introduction we were most excited about! I’ve been able to meet/speak with him a few times since then but a major highlight was the launch of LDS Democrats of America in 2012. Then Majority Leader Reid made me sing in front of the international press. As much as I love Sen. Reid, I may never forgive him for that surprise! Nevertheless, leading a few hundred LDS Democrats in the LDS hymn, “Have I Done Any Good in the World Today?” as we launched this exciting organization, is indeed a zenith of my political life, no matter how embarrassing it was at the moment!

There are going to be a lot of tributes today stating the Senator’s accomplishments, which aren’t finished. Here’s one of my favorite tributes from Utah’s Senator Hatch, “We all respect Senator Reid. He is one of the moderate voices around here who tries to get things to work.” I love this accolade because of its irony. To the many conservative Mormon Republicans in the US, Sen. Reid is basically the devil incarnate. They’d probably guffaw at the idea of Sen. Reid being a bipartisan voice making things happen in Washington, no matter how true it is! In fact, let’s just say it straight up, right now. It’s more than disgusting how much politically conservative Mormons hate Senator Reid. I may be frequently embarrassed by Glenn Beck, but I don’t hate him. I don’t question his worthiness as an active Mormon. So to my politically conservative and Mormon friends everywhere, show some respect.

I want to speak to what his public service has meant for America’s Mormon Democrats, and by extension, politically left Mormons around the world. All of us know what it’s like to be told by our fellow Mormons that we’re not worthy to hold temple recommends because of our political beliefs. We all regularly get the question (which I’m finished with even answering!), “how can you be a Mormon and a Democrat?” It’s like they never even hear the letter read every year from the pulpit before election day from the 1st Presidency of our Church stating that there is good in all the major political parties. Or, they forget the long list of Democrat Church Leaders such as President Faust, President Brown, Elder Snow, Elder Echohawk, President Silvia Allred and many, many, many more.

Sen. Reid, to us, is that proof that we can be who we are as Mormons Democrats. We can be active, participating, believing temple-recommend holding members of of the LDS Church AND active, participating, believing, card-carrying members of the Democratic Party. His statement at BYU that he’s a Democrat because of his Mormon beliefs and not in spite of them has become our mantra. He may be one of the busiest humans in America and yet he does his home teaching and goes to Sacrament Meeting on Sunday. As we’ve seen him fight for the most impoverished Americans, clean air, public education, and more, we’ve seen him fight for the values that also make us Mormons.

And let me just say it here, my pie in the sky dream, I’d love to hear Senator Reid speaking from the pulpit at future General Conferences of my Church….