The Good Samaritan, or The Good Undocumented, Gay Migrant

When Christ shared his parable of the Good Samaritan (as recorded in Luke 10), he carefully tuned it to the context of his day. This made it a very provocative and compelling narrative. Because we often lack insight to the culture and context of that time, we tend to miss out on the full effect of his parable. To more completely appreciate Christ’s teachings here, we must first understand the context of his comments, and second, we ought to consider a modern application that similarly pushes boundaries in our own culture. 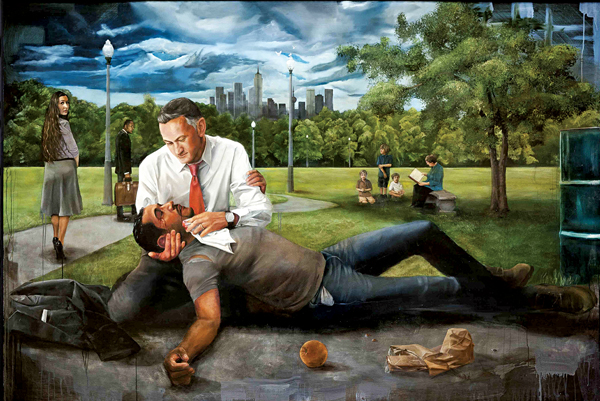 First, understanding the context. Perhaps the best place to start is with the Samaritans, who were neighbors to the Israelites. Samaritans adhered to a form of Judaism that only accepted their own version of the Pentateuch as scripture. They also claimed to be the true Israel, descended from Ephraim and Manasseh. Both Jews and Samaritans were taught that it was wrong to enter each other's territory, and were cautioned against even speaking to one another. As one might expect, they engaged in many violent conflicts over the years. You might say the Samaritans were enemies of the Israelites; at a minimum they were outsiders.

It is also helpful to understand a bit about Jewish culture and obligations: “In Jesus's culture, contact with a dead body was understood to be defiling. Priests were particularly enjoined to avoid uncleanness. The priest and Levite may therefore have assumed that the fallen traveler was dead and avoided him to keep themselves ritually clean. On the other hand, the depiction of travel downhill (from Jerusalem to Jericho) may indicate that their temple duties had already been completed, making this explanation less likely, although this is disputed. Since the Mishnah made an exception for neglected corpses, the priest and the Levite could have used the law to justify both touching a corpse and ignoring it. In any case, passing by on the other side avoided checking ‘whether he was dead or alive.’ Indeed, ‘it weighed more with them that he might be dead and defiling to the touch of those whose business was with holy things than that he might be alive and in need of care.’”[1]

Bearing this contextual framework in mind, we can see that Christ was painting quite a provocative picture. When asked, “who is my neighbor?” he replied with a parable in which two upright Jewish leaders exhibited un-neighborly behavior, likely in an effort to maintain their purity obligations under Jewish tradition; meanwhile, an enemy and outsider—a Samaritan—was held up as an example of exceptional neighborly compassion. Given that “Latter-Day Saints” also maintain numerous codes and traditions, and are entrenched in a fairly rigid culture, we have an opportunity to modernize this parable so that we too can feel the sting of Christ’s insightful reprimand. There are many possibilities for a modern iteration, but here is one version worth considering:

25 ¶And, behold, a certain lawyer stood up, and tempted him, saying, Master, what shall I do to inherit eternal life? 26 He said unto him, What is written in the law? how readest thou?

28 And he said unto him, Thou hast answered right: this do, and thou shalt live.

29 But he, willing to justify himself, said unto Jesus, And who is my neighbour?

30 And Jesus answering said, A certain man went down [from Salt Lake City to Provo], and fell among thieves, which stripped him of his raiment, and wounded him, and departed, leaving him half dead.

31 And by chance there came down a certain [temple worker] that way: and when he saw him, [he kept driving because he had a shift to make]. 32 And likewise a [relief society president], when [she] was at the place, came and looked on him, and passed by [to get to her visiting teaching appointment].

33 But a certain [gay, undocumented migrant], as he journeyed, came where he was: and when he saw him, he had compassion on him,

34 And went to him, and bound up his wounds, [administered first aid], and set him [in his own car], and brought him to [a trauma center], and took care of him.

35 And on the morrow when he departed, he took out two [days’ wages], and gave them to the [hospital administrator], and said unto him, Take care of him; and whatsoever thou spendest more, when I come again, I will repay thee.

36 Which now of these three, thinkest thou, was neighbour unto him that fell among the thieves?

37 And he said, He that shewed mercy on him. Then said Jesus unto him, Go, and do thou likewise.

(1) Christ invites us to open our eyes to those around us. We should not judge, but rather look on the heart and fill our own hearts with love. We can learn from our neighbors, even if we've been taught by our culture to judge them harshly or to consider them as outsiders. In Christ's time, that included Samaritans; in our time it might include people who fall outside the proscribed boundaries to which Mormons generally subscribe- e.g. LGBT individuals, illegal aliens, “worldly” people, etc.

(2) Christ showed us that everyone is our neighbor. Everyone. We have an obligation to love and serve all people, even if serving them might seemingly interfere with our obligations as Mormons. Unlike the Levite or priest of Christ's parable, when it comes down to a choice of either strictly observing a Mormon rule or obligation, or showing compassion and love to another person, we ought to err on the side of compassion and love. Referencing a metaphorical [undocumented, gay migrant]—concerned above all with caring for others—Christ admonishes us to “go, and do thou likewise.”

*The author was inspired by Jared Anderson’s writings and podcast, available at http://www.mormonsundayschool.org/.