Voter Fraud vs. Voter Suppression- Which is the Real Problem?

After the November 2012 election, Republicans across the country were understandably frustrated. Conservative media outlets had been predicting an easy win for former Governor Mitt Romney. The right-wing media and blogosphere kept telling Republican voters that the polls were biased towards President Obama. Well-renowned conservative pundit George Will famously predicted that Romney would win the Electoral College in a 321-217 landslide. Conservative televangelist Pat Robertson told his followers that God had informed him that Mitt Romney would win and become a two-term president. Instead, Barack Obama was handily reelected and Democrats gained seats in both the Senate and the House. Demographers’ predictions of the expanding importance of minority voters, especially Latinos, in presidential elections were spot-on. 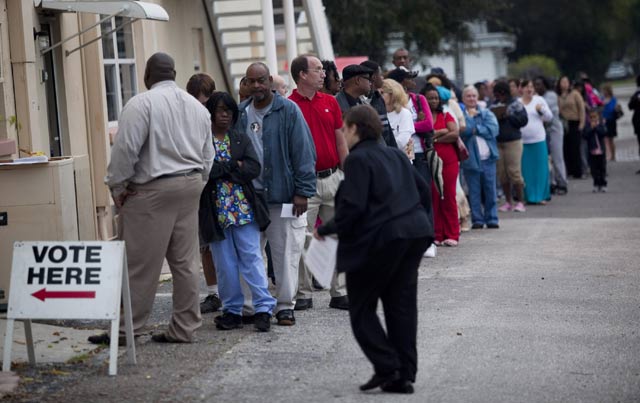 Almost immediately after the election, lame-duck Republican-controlled legislatures in swing states like Pennsylvania, Michigan, and Ohio proposed radical changes to the way each state allocates their Electoral College electors in order to rig the system in their favor. Instead of giving all of their state’s electors to the presidential candidate with the most votes, swing state Republicans proposed dividing the electors proportionally to the popular vote (or in some cases, in proportion to the GOP-tilted gerrymandered House districts.) If enough swing states had done this before 2012, Romney might have won the election without winning the popular vote. While many liberals, myself included, have long called for abolishing the electoral collage and reverting the national popular vote to determine the winner in presidential contests, doing so piecemeal in only swing states would make it more difficult for a Democrat to be elected as President. Fortunately, the proposals to alter Electoral College allocations did not move forward. However, the fact that these proposals were the immediate Republican response to Obama’s reelection says a lot about what the Republican Party thinks it must do to win elections.

For many years, Republicans have been clamoring for laws that require citizens to present a government-issued photo ID in order to vote. They claim that such laws are necessary in order to prevent rampant voter fraud. While on the surface a requirement for a government-issued photo ID may not seem to be a big deal – and it isn’t for the 89 percent of Americans who possess photo IDs – over 3 million Americans do not possess such IDs. These individuals mainly include the elderly, minorities, the poor, and young adults. Many minorities who live in urban environments rely on public transportation to get around and thus do not possess driver’s licenses. Approximately 25 percent of African Americans do not possess government-issued photo IDs. Many seniors in this category, who also often do not drive, rely on forms of ID that do not contain photos such as Medicare and Social Security cards. While some states offer non-driver photo IDs, these also present a variety of challenges. Many poor residents in rural communities have to travel great distances to the closest government ID-issuing office. Also, in order to obtain a new photo ID, you typically need to present another form of ID, usually a birth certificate. Because birth certificates were not always issued in American communities in the first half of the Twentieth Century, seniors are sometimes unable to provide a birth certificate because they do not have one. Also, human errors in ID documents often cause problems. Under Texas’ new strict voter ID law, a Texas district court judge who had voted in every election for the last 49 years, was prevented from casting her ballot during early voting in 2012 because of a small discrepancy in her driver’s license and voter registration card. The priorities of Texas’ Republican lawmakers is apparent when concealed weapons permits are accepted as valid voting IDs, but student IDs, including those issued at state universities, are not.

The GOP says it doesn't suppress the vote, but in Texas, a concealed carry permit is an accepted voting ID while student IDs are not.

After the U.S. Supreme Court upheld a voter identification law in Indiana in 2008, over 30 states passed laws requiring some form of identification at the polls, 15 of which require photo IDs. However, the data show that voter ID laws are a solution without a problem. A host of investigations into allegations of voter fraud have shown that it simply is not a serious problem and has virtually no potential to alter election results. For example, a 2007 Justice Department investigation, during George W. Bush’s tenure, turned up virtually no evidence of any organized efforts to skew federal elections. In 2012, the State of Pennsylvania, then controlled by Republicans in both the legislature and governorship, admitted that voter fraud was a non-existent problem. A recent Loyola University Law School study found only 31 incidents of voter fraud out of over 1 billion ballots cast in the U.S. since 2000. Many other studies affirm the same conclusion. There have only been a handful of voter fraud prosecutions over the past decade. It is clear, however, that voter ID laws depress voter turnout. The nonpartisan Government Accountability Office found that new voter ID requirements in Kansas and Tennessee decreased turnout in those states in 2012 by over 100,000 votes.

The true motive behind many Republicans’ push for voter ID laws is no secret. Over the past several election cycles, Republicans fared much better when voter turnout was lower. In states like Georgia and North Carolina, a 2 to 3 percent increase in African American voter turnout can make or break an election for Democrats. Voter ID laws are just one part of the GOP’s repertoire of voter suppression tactics. After observing Democrats’ huge advantage in early voting in 2008, many Republican-held legislatures moved to curtail or end early voting. “Souls to the Polls” is an African-American-led voter drive that aims to deliver worshipers in black churches to polling stations en masse after Sunday services during early voting periods. This program was very successful in boosting turnout among African Americans in 2008 and 2012. Ohio’s Republican Secretary of State Jon Husted subsequently eliminated all Sunday early voting in 2014 and turnout among African Americans predictably dropped.

Long voter lines can also be a means of discouraging voting. Precincts with more black or Latino voters have longer wait times. In fact, on average, black voters have to wait twice as long to vote as whites. In some minority-heavy precincts, voters have to wait 1 to 2 hours to cast their ballot. For the working poor, it can be difficult to be away from their job for so long. Perhaps the most notorious form of voter suppression is the inability of Washington, D.C’s 650,000 residents to cast a vote in U.S. Senate or House elections. These citizens are ruled and taxed without representation. Yet Republicans have consistently opposed any proposal to enfranchise Washington, D.C. voters.

Not long ago, Republicans won presidential contests in landslides. Both Ronald Reagan and George H. W. Bush achieved massive victories and did so without disenfranchising minority voters. They won their elections by ensuring their party’s platform appealed broadly across the electorate, and not just to the radicals in their own party. Both the Republican Party and the U.S. as a whole will be much better off when the GOP abandons its efforts to rig elections and disenfranchise minority voters, and instead adopts policy positions that appeal to a much broader cross section of our society. For the past two decades, Democrats have won elections by expanding the electorate and appealing to many new voters. Perhaps someday – hopefully sooner than later – Republicans will decide on the same formula for success.